In May 1970, Forrest G. Brandt Jr. ’71 was both a Vietnam veteran and a student at Ohio State, seeking understanding and truth through his camera lens.

On April 30, 1970, President Richard M. Nixon announced that U.S. and South Vietnamese forces had crossed into Cambodia to destroy sanctuaries that allowed North Vietnamese troops to enter South Vietnam and attack U.S. forces. Protests were rampant on college campuses across America, including at Ohio State, where students also had been demonstrating for civil rights and women’s rights. Forrest Brandt Jr. had recently returned to the Columbus campus after serving a year in Vietnam. In 1971, he completed the Ohio State education he had begun a decade earlier.

Early on May 4, 1970, I grabbed my camera bag and headed down Iuka toward campus. High Street traffic seemed a bit light for 8 o’clock, as did the stream of students coming from the Greek houses on 15th. The smell of tear gas still clung to the area where police and students had clashed the night before. From the east end of the Oval, I could spot a gathering of students near Orton Hall. A platoon of National Guardsmen stood in front of the Administration Building behind wooden barricades, M-1 rifles at the ready, gas masks and bayonets riding on their web belts. “STRIKE” had been spray-painted on Admin’s limestone fascia.

I was no stranger to students’ anger. In October 1961, my freshman year, the appearance of avowed communist Daniel Rubin at the Ohio Union sparked squabbles over free speech. A month later, I was among the throng that marched to the Statehouse to protest the faculty vote to keep the football team out of the Rose Bowl. The ’60s also saw many students, including me, take part in demonstrations against racial discrimination that led to open housing laws for university-approved rooming houses. In 1966, as an ROTC cadet, I marched around the Oval in my final May Day review to the jeers of anti-war protesters. 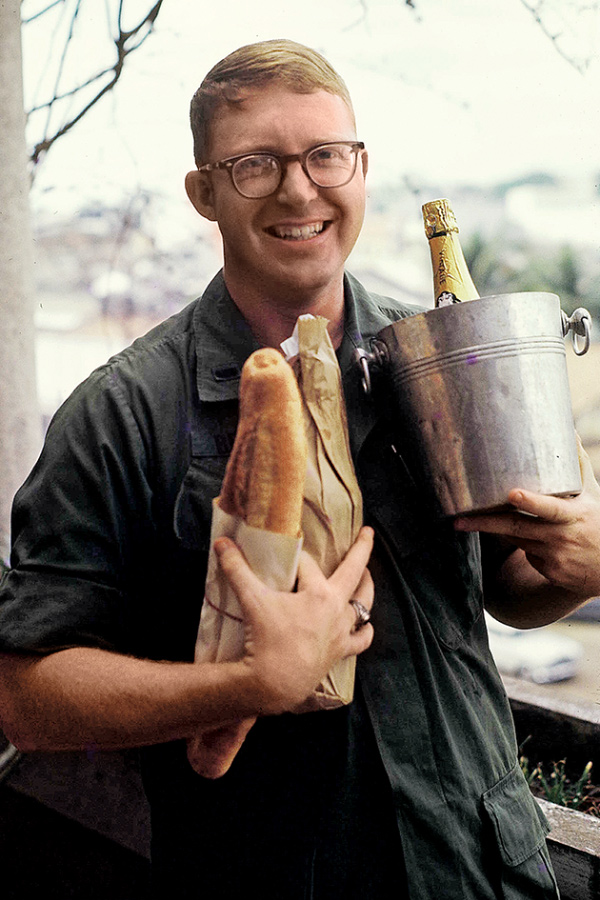 Forrest G. Brandt Jr. ’71 celebrates his upcoming departure from Vietnam. His service gave him a unique lens through which to view campus unrest 50 years ago this spring.

Financially strapped and with a two-year military obligation hanging over my head, I took an Army commission with the idea I could resume my college education under the GI Bill after my discharge. I returned to campus within days of arriving home from Vietnam, immediately feeling the tension between the university and community, between students and police.

Now, on May 4, I stood in the middle of that conflict, aiming my cameras at the students on one side and the Ohio National Guard on the other. Maybe on this day I would be able to resolve the conflict that had been boiling inside me for five years: Were the student protesters right or was there an important purpose in keeping Vietnam from turning communist?

I took in the chaos and passion as I snapped away. One item caught my eye. I could see the clips in the rifles of the Guard: eight rounds of live ammunition for each man. I assessed the Guard numbers. In the short time I had been on the Oval, the Guard had grown — from a platoon to a company — and was led by a brigadier general, a one-star commanding what should have been the task of a captain. No longer standing behind the barricade with rifles at rest, the guardsmen had moved to fixed bayonets and gas masks.

The student crowd also had increased in size — and belligerence. Anxious student leaders huddled to talk; hot heads screamed profanity-laced taunts at the Guard. A helicopter hovered over the scene, and nervous chatter began: Was it the news, the cops or the Guard controlling the chopper? I started computing: Eight bullets times 150 men in a company. Did anyone realize how dangerous the situation was?

I had just turned toward the students when I heard a couple of soft pops, looked up and watched as cannisters of tear gas flew overhead and landed deep in the mob.

Screams of panic pierced the air, and protesters quickly tied handkerchiefs around their faces. Some raced to the smoking canisters and heaved them back into the line of guardsmen. More pops, more canisters arcing across the clear blue sky. The students were incensed. “Pigs off campus!” some yelled. Here and there, plainclothes police officers snatched protesters and marched them away.

A year in Vietnam had convinced me that the American effort was futile. My job had allowed me access to Saigon for a day every week, and each visit presented me with the sight of young Vietnamese men riding motor scooters around the city and gathering around Saigon University. I had interviewed American advisors to the Army of the Republic of Vietnam (ARVN), and the reports were mixed. Some advisors said ARVN units fought well, others expressed concern about a lack of discipline and leadership among the South Vietnamese forces.

In contrast, interviewing U.S. officers and men in combat units inevitably led to comments about the discipline and commitment of North Vietnamese soldiers. They marched hundreds of miles, from the north deep into the south, along trails that American forces monitored, bombed and shelled. And yet they fought with persistent determination against our overwhelming firepower.

Given what I witnessed in Vietnam, I had come to question the officially stated U.S. policy of holding the line until the ARVN was ready to stand on its own. The experience made me sympathetic to the students’ cause of ending the war and getting American troops back home. I understood their frustration that the end of the war seemed nowhere in sight. 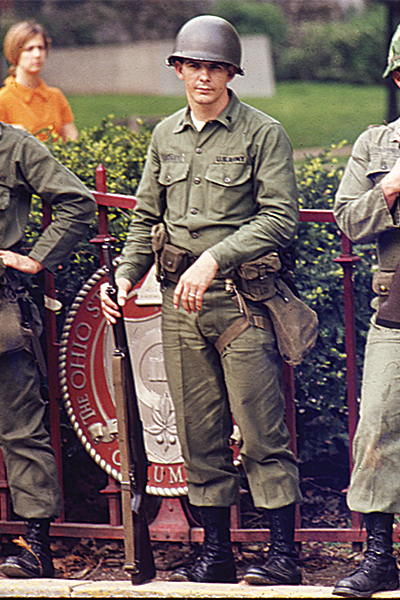 A National Guardsman connects with Brandt through the photographer's camera lens.

Now I was on campus surrounded by students. I shared their ardor for a moment, longing to see things as clearly as they seemed to. Then I remembered that these students had received draft deferments. Each time a student received a deferment, a young man who wasn’t in school took his place in the draft. With each deferment, medical excuse or conscientious objector, another boy from the inner city or rural America took his place. I saw the resulting inequity as soon as I entered active duty. Now I listened as those same liberated students called soldiers pigs, Nazis, murderers.

I’d come home to that, confronted first by protesters at the gates leading out of Travis Air Force Base, then on San Francisco streets. Back at Ohio State, I saw it in campus graffiti and letters in The Lantern. I heard it expressed in casual conversation and classroom discussions. I wasn’t a pig, a murderer or a Nazi, but in uniform I was a symbol of the war and a target for those frustrated by their inability to get the government’s attention.

I looked at the guardsmen and sympathized with their lot. They wore the same uniform I had worn. Like me, they felt compelled to serve when called. I swung from the position of the students to that of the guardsmen.

Just as quickly as I had sided with the Guard, another thought entered. Congress had given the Guard and Reserves permission to increase to 150% of fill. While units in combat were starved for soldiers, Guard and Reserve units were flush. And who got those slots? That was easy to see when looking at the force in front of me; more than 200 men and not a single black face in uniform. How could I side with the Guard knowing they did not risk deployment to Vietnam even as infantry units were begging for men?

On and on it went. Out of film and exhausted from wrestling with the issues of the protest, I packed my cameras and headed back to the apartment. I thought about all those bullets, of how uncomfortable a gas mask is, of how futile past protests had been, of the shouts and insults, of how tired the guardsmen would be after a day of fruitless effort to break up the demonstration. What bothered me most was the nagging question: Did either side understand the danger?

I was no more back to the apartment when I heard the news: Four dead and nine wounded at Kent State. “It could have been right here,” I told my apartment mate. “I saw all the elements right on the Oval.”

Which side was right? I didn’t know. The main mission of the National Guard was not crowd control, but what were institutions to do if students broke into facilities, destroyed property and defied order? The confusion I’d felt on the Oval continued to brew.

Forrest G. Brandt Jr. ’71 earned his bachelor’s and master’s degrees at Ohio State and the University of Cincinnati, respectively, before embarking on a career as a teacher. He served in the Army Reserves until 1997, when he retired with the rank of lieutenant colonel. He has taught freshman composition at Northern Kentucky University since 2005.