Linda Saif works with Andrea Fodorne Mathe on an infectious disease preparedness project in her lab on the Ohio State Wooster campus.

Deep knowledge is the best ally

Scientist Linda Saif has long been a trusted partner when the world stumbles into a pandemic.

Growing up in New Albany, Ohio, Linda Saif ’71 MS, ’76 PhD was fascinated by the livestock, chickens and other animals that inhabited her family’s small farm. That young girl’s curiosity, bolstered by decades of scientific inquiry and research, has taken her around the globe to battle pandemics that have afflicted millions of people.

Saif has spent more than 40 years at Ohio State engaged in the study of coronaviruses, immunity and vaccines as a renowned virologist and immunologist. Her lab was the first in the world to document the interspecies transmission of coronaviruses from wild ruminants to cattle and from cattle to poultry.

That contribution to the understanding of coronaviruses — which include SARS, MERS and now COVID-19 — led the World Health Organization to seek her out for its team combatting the 2003 SARS outbreak. Her laboratory has since served as a WHO reference lab for animal coronaviruses, and in 2013, she battled MERS as an advisor to the Saudi Arabian government’s Ministry of Agriculture.

During the current outbreak, Saif has again been called upon, this time to work with other Ohio State researchers on a test to detect antibodies in those who have had COVID-19. She also is working with Wexner Medical Center physicians on a plasma treatment for those severely affected. Both could be critical in understanding and controlling the pandemic.

The list of Saif’s internationally recognizable accolades is long — and includes becoming the first woman to earn the esteemed Wolf Prize in Agriculture — and so, too, is her roster of grateful protégés: Saif has spent decades serving as a scientific advisor and mentor to grad students and post-docs, many of whom are now prominent scientists and animal health experts.

And what of that curious girl who thought her affinity for animals might one day lead to a career as a veterinarian? She’s an internationally recognized scientist whose work has helped protect citizens of the world. 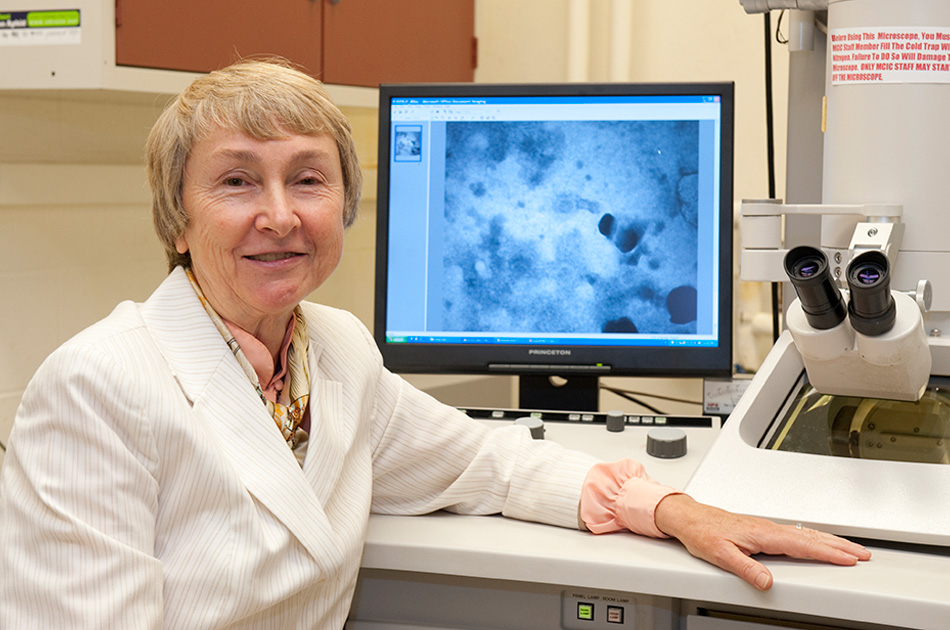 Saif has studied coronaviruses for more than 40 years, consulting with the World Health Organization and other experts around the globe.

What has kept you fascinated by coronaviruses throughout your career? What makes them so ripe for research and discovery?

Coronaviruses have a very large genome, so they are continually changing and evolving. It is challenging to try to understand their genetic makeup and how they evolve, jump species barriers, circumvent their hosts’ immune response and cause disease. All of these unanswered questions make them intriguing to study in hosts such as swine, cattle, wildlife and humans. In cattle, we discovered that closely related bovine coronaviruses (CoVs) can spill over from wild ruminants. Bovine CoVs can cause multiple disease syndromes — respiratory, enteric and winter dysentery — depending on an animal’s age and respiratory tract microecology.

I find it fascinating that in parallel to the emergence of new coronaviruses in humans, several new CoVs have emerged in swine just in the past decade, potentially from bats (as was the case for SARS, MERS and COVID-19), but also recently from birds. Likewise, since SARS first appeared in 2002, we have witnessed the emergence of two additional human CoVs — MERS and COVID-19. MERS is ongoing in the Middle East, and as we know, the COVID-19 pandemic is still spreading and killing people.

As new coronaviruses emerge, we must continually find new technologies to prevent and control the diseases they cause. Understanding the immune responses and how to develop vaccines and treatments for these emerging CoVs remains my major goal and research focus.

Most of us are learning about this topic for the first time, but you must have seen early on how this pandemic could spread. What was it like to watch it unfold?

Even to me, knowing the history and evolution of coronaviruses, it was surprising to see SARS-CoV-2 (the virus that causes COVID-19) appear so quickly, be so devastating and spread via respiratory infections on such an unprecedented global scale through the entire human population. However, SARS and MERS were the unheeded harbingers that signaled how devastating coronaviruses can be when they can transmit efficiently and rapidly in humans with no immunity.

Also, unlike with SARS and MERS, there were many pre-symptomatic and asymptomatic individuals who could transmit the virus. SARS showed us that diseases can hitchhike on airplanes, so a new disease emerging in China may cross oceans and continents to surface in the United States within the time it takes a plane to circumnavigate the globe.

We have experienced devastating disease epidemics, with several swine coronaviruses causing the loss of millions of pigs worldwide, yet these emerging animal CoV diseases have been largely disregarded outside the veterinary virology community. Global efforts and a new generation of bright and dedicated young scientists are needed to combat these deadly emerging viral diseases in humans and animals.

What drew you to virology over other branches of science? What would you say to students considering your field?

Growing up on a small farm, I witnessed firsthand the infections and deadly diseases that microbes could cause in livestock and pets. Working in a research lab at the Ohio Agricultural Research and Development Center, first as an undergraduate at the College of Wooster and later as a microbiology graduate student at Ohio State,

I observed the “footprints” left by viruses in the cells and tissues they destroyed. I recognized the devastating diseases they caused in humans and animals.

My first glimpse of a viral particle was through an electron microscope at Ohio State during one of my virology graduate courses. That instrument was my telescope to observe an unimagined nanocosmos containing the Lilliputian world of viruses!

Viruses cannot reproduce outside a living cell. They are the bioterrorists of the cell, hijacking its replication machinery to exploit it for their own function and ultimately killing the host cell. The power of such a small adversary has been evident throughout history, such as during the influenza virus pandemic of 1918 that claimed at least 20 million lives (and perhaps more than twice that, according to some reputable sources). We now face the ominous threat of other emerging and devastating viral infections — including the ongoing COVID-19 pandemic, part of a living history for each of us. Virology certainly remains at the forefront for disease research, both in human and veterinary medicine.

We’ve all made personal choices in hopes of protecting ourselves and our loved ones from COVID-19. How have you changed your daily habits? What enduring lessons do you hope the world learns from this experience?

I do most of my shopping online or via pick-up orders. I telework from home as much as possible, and I attend conferences and communicate with students, staff and faculty using Zoom or Skype. I think many of these trends will continue to some extent post-COVID-19. What I hope will emerge is a greater appreciation of science and scientists, teachers, medical workers and first responders and a recognition of their dedication and contributions during this pandemic. Hopefully, a major response to COVID-19 will be better preparedness and increased research funding to combat the next pandemic.

Tracy Turner Robinson ’92, ’00 MA is a writer and content strategist in the College of Food, Agricultural and Environmental Sciences.