Investing in our future

When we empower students today, we increase their capacity to pay forward when they are able. These investments reap rewards indefinitely.

Meredith Walters and Shane Scott are en route to different destinations in life, but the aim of their journeys is the same: to lift others. Recently, when they needed support to navigate an especially challenging time, it was there.

Walters and Scott are among hundreds of Ohio State students granted emergency financial assistance through Student Life’s Student Advocacy Center since the coronavirus outbreak struck. Many students experienced difficulties after the Columbus and regional campuses closed, prompting a wave of requests for help. The entire fall semester prior to the outbreak saw 89 applications; in the spring semester that followed, students submitted 1,438 applications.

“Having to move out, when this whole transition started, I was really anxious,” Walters says. “Going home to my parents’ house was just not an option for me.”

She had been working at a campus café as many hours as her academic schedule allowed, and when it closed in response to COVID-19 public health orders, she was not sure how she would cover tuition. Her financial worries were compounded by unexpected dental bills.

“In the future, I want to focus on parent education, to foster the well-being of children and whole families,” says Walters, a human development and family studies major. In high school, she volunteered with a grief support group as an ambassador to elementary schools, helping students dealing with their parents’ incarceration. “This shaped my heart for children and underserved populations.”

Shannon Jones ’08, ’09 MEd, a doctoral student in higher education and student affairs, has a similar commitment to underserved individuals. It drives her passion to create greater access to higher education. Her current focus is helping Ohio State students over this rough patch as the primary reviewer of applications for emergency assistance. 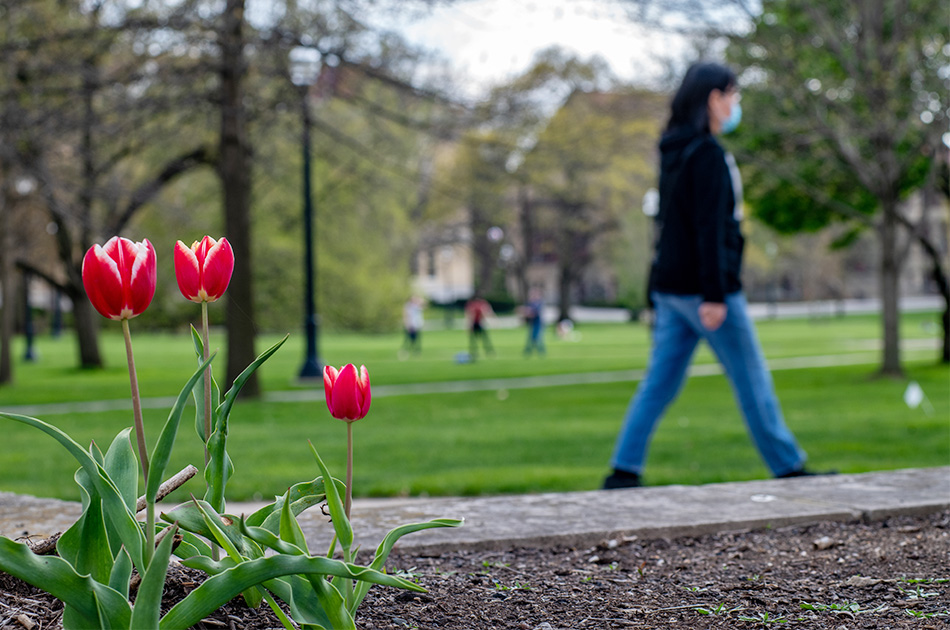 “Our students were concerned about having to leave campus, many of them without any options or a safe place to go,” Jones says. “It has been such a joy and an honor to tell them they are going to get the help they need.”

The email from Jones letting Walters know she would receive support helped ease her stress. “I could focus on finishing my classes strong in our new virtual setting,” Walters says.

Emergency assistance gave Scott, a first-year medical student, stability during an uncertain time. He was able to fly to Philadelphia to be with his family at a critical moment.

Originally from Jamaica, Scott moved to the United States as a 12-year-old with his mother and two brothers. “[My mother] is a single mom, and she works very hard as a certified nursing assistant in a nursing home. She was having health problems and had fears of losing her income and her ability to pay the mortgage,” he says. “This is the first home she has ever owned, and where she feels truly comfortable.”

After helping his mother navigate doctors’ visits, Scott returned to Ohio State to continue his cardiovascular health research. With a master’s degree in medical sciences from Boston University and four years’ experience conducting research for the National Institutes of Health, Scott was drawn to Ohio State by the opportunity to pursue additional research during medical school.

Feeling a sense of belonging also played a role, says Scott, a student of color whose interactions with faculty physicians assured him inclusion is an Ohio State priority. He also found the leadership opportunities he sought, including the role of president of the College of Medicine’s Class of 2023 student council.

Like Walters, Scott has set his goals on improving others’ lives, and he’s all the more passionate because of his own hardships.

“Growing up, the only time I saw a doctor was during my annual basketball physical. I know what it’s like to be on the fringes of health care,” says Scott, who is pursuing an MD degree and a PhD in integrated biomedical sciences. When he begins treating patients, he wants to “consider what else is happening in their lives, and empower them.”

For Jones, the opportunity to boost the success of these two students was a welcome perk of the job, one that will benefit them and all the families and patients they will help in the future.

If you want to support students

Your gift to the Student Emergency Fund will directly aid students who are struggling with loss of income, housing issues and food insecurity. You can direct your gift to students in a specific college. If there is no immediate need in your college, your gift will be directed to other students based on need.

Shanna Finley is a director in Advancement Communications.