Readers respond to stories about Eddie George, the alumni magazine as a gathering place, alumni connections and more.

The atmosphere surrounding the Ohio State-Army football game this fall was everything we would expect from such a matchup: sportsmanship, competitiveness and patriotism. There were so many memorable aspects of the day.

The alumni association’s pre-game huddle and tailgate featured Ohio State’s highest-ranking Army ROTC graduate on active duty, Lt. Gen. John Murray. (The Army ROTC newsletter reported this reunion was the first alumni association-sponsored pre-game event ever to sell out, drawing more than 800 cadets, cadre, alumni, family and friends.) The thrills continued with the introduction of the game ball by the Army Golden Knights parachute team and the deafening roars of “USA, USA, USA” ringing through the ’Shoe upon Army’s entrance.

It was indeed a special day in which the shared traditions of football excellence and service to nation were on display.

Breaking from custom, the entire Ohio State football team, not just the team captains, met the entire Army football team at midfield for a pregame handshake. And although Ohio State was triumphant on the field of play, the Black Knights (and the Buckeyes) never quit. At game’s end, it was touching to see both teams assembled in the south end zone to sing one another’s alma maters.

One West Point cadet (an Ohioan and Buckeye fan) was photographed next to Coach Urban Meyer forming our treasured O-H-I-O. I will always remember that, as I will the sight of a man decked out in Ohio State colors walking with his son, a West Point cadet. The words on the father’s T-shirt captured the spirit of the day: “West Point Dad with Buckeye roots.”

The feature story on Eddie George in the fall 2017 issue is a fascinating glimpse into his life and all the avenues he’s traveled since his days as a student-athlete and Heisman Trophy winner. And the priceless moment on those pages is the photo of Eddie holding his diploma after the 2001 commencement ceremony. An Ohio State education can and will take you far, as Eddie well knows.

At home in the gathering place

Thank you for the great new magazine. I always try to read every story when I get the magazine, but the fall issue was a thorough delight and fun read. Living in Alabama, where they still think red is crimson, not scarlet, your new approach confirmed all of my beliefs about the great school and alumni association I call home.

A gift of gratitude

I am a regular reader of the magazine, though I find that, at age 85, I am a bit removed from many of the topics. However, I stay in touch with several old classmates, and we get together on occasion.

My days on campus have long since passed, but I still find it gratifying to have graduated from such a great university. Though I am a member of The Ohio State University Alumni Association and contribute to the university and the Department of Athletics, I do so out of gratitude. And I know that in some small way, my ghost is walking the Oval.

As a life member and former alumni association board member, I have been a regular reader of the magazine for years. I have to say that the issue that just recently landed in my mailbox was a fantastic surprise! The issue seemed to have an energy that I haven’t seen before. The fantastic design and content have really come together in quite a powerful way. Congratulations on a great redesign. 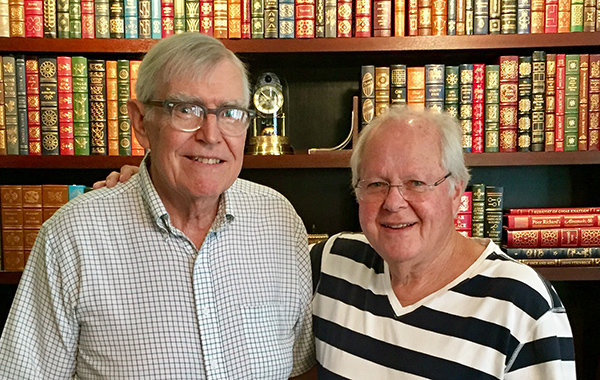 Max Rothemund and I were classmates at Ohio State’s College of Medicine from 1962 to 1966. We knew each other by name and face, but we were not friends. We never had any interaction or clinical rotations together. After graduation, Max went to Los Angeles County Hospital for his internship, and I went to New York City for mine. By 1967, the Vietnam War was raging and both of us were drafted.

Coincidentally, we each had selected the U.S. Navy and were assigned as Navy doctors to serve with the Marine Corps. Our basic training was a 10-day course at Camp Pendleton. Though together at that time, the course was exhausting, and we had no time for a reunion. A few days later, we were flown to Vietnam and assigned as surgeons with separate Marine battalions. Each battalion had approximately 1,000 troops, one Navy doctor and 53 Navy corpsmen. The next time I saw Max was six months later, after the Tet Offensive, when my battalion passed through Dong Ha on the way to Khe Sanh. Max was now at the medical battalion where I stopped to replenish medical supplies. We were happy to chat for a while and wished each other good luck. We never met again.

In 2016, our med school class of ’66 held its 50th reunion in Columbus. Neither Max nor I attended. I filled out a little biographical sketch for the reunion that included my email, and that resulted in Max, after 50 years, asking, “What’s up?”

After his tour, Max did an ophthalmology residency at Ohio State and moved to Laconia, New Hampshire, where he practiced until 2000 and then retired. He married, had two children and is proud to have accomplished scuba diving off six continents.

I chose urology and continue to practice in Los Angeles, where I’ve lived since 1973. I married, had three children and have visited all of the continents Max has dived in.

In August, Max went to Idaho for the solar eclipse and then came to Pasadena to visit his son. That’s how we met up again after our 50-year hiatus. The common thread was our Ohio State heritage. Classmates. Not friends but friendly. Proud of each other. Keenly aware of what it took to become an Ohio State MD. Our paths were divergent yet crossing in extraordinary ways.

Thank you, Ohio State, for allowing me to bond with my classmate, my fellow battalion surgeon and my friend Max.

True story. My Ohio State college roommate Cher White Ray and I attended the Ohio State-UNLV football game this fall. She was in a wheelchair, and after the game I started pushing her up a hill and then decided to ask for help from a group of current students. They not only pushed her up the hill, but insisted on taking her all the way to the Faculty Club on the Oval. We were thrilled that we happened upon this fine group of Ohio State freshmen who took time to help two alumni.

Something to smile about

We often hear about the valuable connections within Buckeye Nation, and I’d like to share one we recently experienced at Ohio State’s Nisonger Center, which supports individuals with intellectual and developmental disabilities and their families.

The Nisonger Center connected with Dr. Jackson Cockley ’04 DDS of Playtime Dental in Mansfield, Ohio, through a mutual involvement with the kiDDS Foundation, which makes dental care available to children throughout the world. Dr. Cockley’s donation of a digital panoramic X-ray machine to our dental program gave us the opportunity to better serve our patients by providing immediate access to high-quality digital images.

Our center’s dental program has provided services to adults and children with intellectual and developmental disabilities for more than 45 years. In partnership with the College of Dentistry, we give all Ohio State dental students, dental hygiene students, dental fellows and pediatric residents an invaluable training opportunity in working with patients with intellectual and developmental disabilities.

We couldn’t be more grateful for the interconnectedness that supports the Nisonger Center’s mission and for the generosity of alumni throughout our Ohio State community.