Where I live: Los Angeles

This City of Angels is home to thousands of Buckeyes, and they’re here to tell you about the well-known sights and better-kept secrets that give LA its allure.

Just as 2016 Oscar-grabber “La La Land” opens with cars idling bumper to bumper on a Los Angeles highway, so is traffic what first strikes many Buckeyes who move to the City of Angels.

“I hate to admit, but the rumors about the traffic are true,” says Maya Cooper ’08. “I thought, ‘There’s no way it can be that bad. I think everyone’s exaggerating.’ And then as soon as I got here I realized it was true.”

This marketing director for Merry Jane, Snoop Dogg’s cannabis-centric media company, calls her failure to buy an electric car when she moved to LA last year “a rookie mistake.”

The city’s more than 500 square miles may be the scene of movie-worthy traffic jams, but they also offer an environment for the diversity Ohio State alumni embrace. Some 8,000 call the Los Angeles area home.

Brett Nobles ’08 and Ashley Williams Nobles ’12 moved to Los Angeles three years ago. He was an accountant; she was in recruiting and sales. Now their business revolves around two properties they rent out for uses from feature film shoots to Instagram shots.

“We just loved how different things were, the inspiration of the diversity, whether it be people or terrain,” Brett says. “You get so many different ways to live life in LA and different types of people coming from different backgrounds. So in that sense, there is definitely a cultural awakening.” 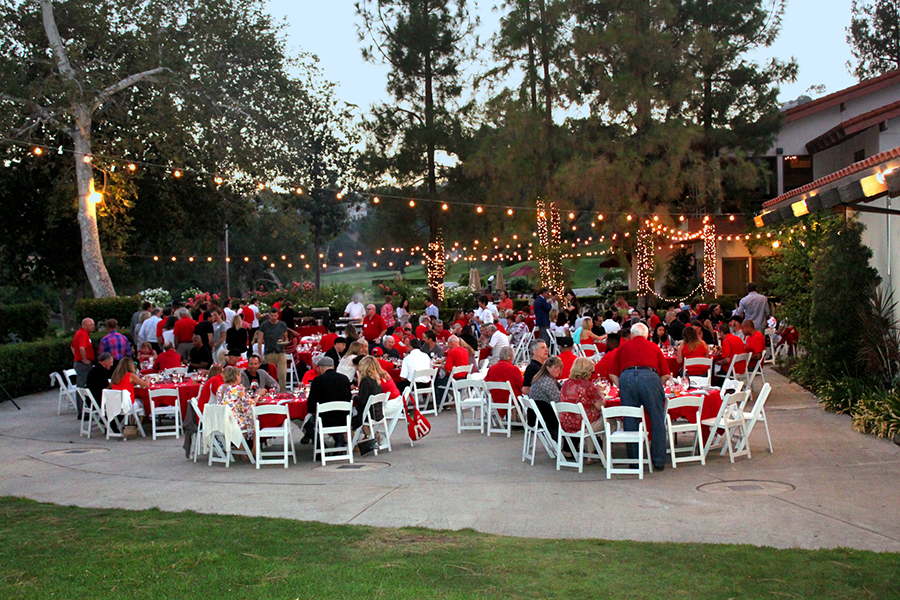 The Alumni Club of Los Angeles hosts its Kickoff Barbecue at the Calabasas Country Club.

Maurice Hall ’05 describes the city as “a whole different beast.” And when a former Ohio State running back says the city is fast, he knows what he’s talking about.

“This is kind of the definition of work hard, play hard,” he says of the city he has called home since 2009. “Everyone’s grinding. Everyone’s trying to get to that next level. But everyone is having an amazing time after.”

Hall traded in his helmet for many hats in Los Angeles: actor, writer, director, producer, waiter and president of the Alumni Club of Los Angeles.

This past fall, the club of some 500 members hosted its annual Kickoff Barbecue at the Calabasas Country Club. Yes, that Calabasas, home base of the Kardashian clan. More casual gatherings of Buckeyes can be found at game-day festivities across the city. Perhaps the hottest spot is Sycamore Tavern in Hollywood, where Cooper sees alumni of all ages connecting. Other club events run the gamut — from movie studio tours to hikes.

Because of LA’s sprawl, “you kind of find your own little tribe and your own little place,” says alumna Leanne Suter, a reporter for KABC-TV who lives in Pasadena. “We’re right up against the mountains, and that’s something I love.”

Suter also loves options. “This is one of the only cities in the world where you can go to the beach and go skiing on the same day,” she says. “You have all possibilities here.”

Margaret Glaser ’12 chose a neighborhood near the Noho Arts District. The production assistant for Fox Television Animation says the district is a great place to grab brunch and “has a weird amount of theme bars.”

While Glaser says she doesn’t get to the beach as much as she expected to (thank you, traffic), Stuart Fisher ’66 MD says Venice Beach can’t be missed.

If you want to do a little stargazing on your way back into the city, Hall suggests Beverly Hills’ Rodeo Drive or the Hollywood Walk of Fame. You might also catch some glimpses at any of Wolfgang Puck’s restaurants and at Bottega Louie.

When you’ve had your fill of celebrities, it may be time to satisfy a more basic hunger. In the fast-food category, Leanne Suter recommends Top Round Roast Beef. The restaurant’s beef on weck is “heaven on a plate if you like fresh roast beef.”

If you’re craving authentic Mexican food and have time to spare, Fisher says Paco’s Tacos is the place to go. Be prepared for long lines unless you arrive for dinner before 4:30 p.m. or after 8:30 p.m. And if your group just can’t make up its collective mind, downtown’s Grand Central Market offers more than 30 food stalls, including those of Eggslut and Horse Thief BBQ.

If you had just one day to spend in and around Los Angeles, fellow alumni would tell you to get to the beach. Santa Monica is a popular choice. On historic Santa Monica Pier, you’ll find an aquarium, a solar-powered Ferris wheel and a 1922 carousel. South of Santa Monica is Venice Beach, the original muscle beach and Stuart Fisher’s favorite spot (for the people watching alone).

You can find Maya Cooper and friends hiking the Los Leones Trail. Los Leones sits at the south end of Topanga State Park. The trail takes hikers to an elevation of 550 feet, affording views of the Pacific Palisades and Santa Monica.