Natalie Sideserf decorates a cake in the unlikely and delightful shape of a dinosaur wearing a Christmas sweater.

Inspired by the masters, informed by her college sculptures in clay and wire, and fueled by innate ingenuity that is pure Natalie Sideserf, this cake artist and entrepreneur is breaking the mold. The creations that emerge are fit for your most intimate family gathering or a hoedown of historic proportions.

In a sun-soaked Austin kitchen, cake artist Natalie Elliott Sideserf ’08 is considering a non-native bird species from a more architectural perspective than most.

“You learn a lot from a flamingo’s neck,” she says, studying the 14-inch equal parts exquisite and playful pink creature she has sculpted of cake. “Look at the funny way it connects with the body. Then it all sits on top of two spindly legs! The parts aren’t supposed to go together, but somehow they do.”

This ability to connect the parts with finesse — to put unexpected elements together into something uniquely her own — is a Sideserf specialty. Unlikely pairings have defined her career path and her pastries; her sensibilities as a student then and a teacher today; her roles as entrepreneur (she founded Sideserf Cake Studio in 2013) and entertainer (she and husband Dave co-hosted the Food Network’s two seasons of “Texas Cake House”).

“I like to make and teach animals,” says the 33-year-old from Brunswick, Ohio, whose teaching ethos comes with a commitment to make baking fun and accessible on every level. “They challenge you to experiment. You have to figure out the textures, the feathers, the fur, the structure, the eyes.”

In Sideserf’s hands, the art of combining ingredients may include art and commerce, flavors and forms, busts of “Better Call Saul” characters and baked goods, analog and digital, bacon and batter, a hyperrealistic cow skull and its presentation on a wall for a golden wedding anniversary hoedown, appearing on a reality show and appearing as a talented, no-drama professional and problem-solver you’d love to work with.

“Plus, flamingos are likable,” she says, smiling at the bird in front of her that is perfectly statuesque and silly. “People like puppies. And I can’t help it, I love everything with a face.”

Sideserf instills this passion for faces, for personality, for expression, for connection in all of her creations. She and Dave, who quit his job as a tech firm director two years ago to become Natalie’s business partner, tend to be as animated as the characters Sideserf Cake Studio brings to life. They also bring their collaborations through the famous Austin humidity to be the life of the party, birthday, business launch, event at the aquarium or Museum of the Weird or wedding (including their own Halloween season nuptials in 2013, complete with a horror film screening and their own severed heads on a cake).

It’s refreshing — in real life and even rarer on a reality show — to see such honest pleasure in the creativity and complicity of building something great together. This is a couple who clearly love and respect each other as well as what they do. They laugh a lot, consult often, finish each other’s sentences. Also from northeast Ohio, Dave is a big Buckeye football fan with a state of Ohio tattoo on one side of his right forearm and the Cleveland skyline on the other.

“For so long I was maybe too modest, maybe it’s the Midwesterner in me,” Sideserf says. “I wouldn’t talk about what I do. Dave would have to keep telling me, ‘You’re not bragging, you’re telling your story.’ Every year I get better and better at it. I’m learning.”

An important aspect of the learning has come from teaching, she says. Sideserf makes a point to teach what she’s taught herself about the art of cake sculpting, whether it was through her Food Network show, workshops she leads around the country or videos showing techniques that old-school pastry chefs might have kept far less transparent. “A lot of young girls reach out to me now,” she says, “and I love that! I speak to women whenever I can about my experience and how to have that confidence.”

It’s essentially the confidence to, again, pair parts that aren’t expected or proven to go together — not least of which is applying a fine-arts degree to launching, leading and growing a complicated, multifaceted company or working in media as disparate as spun sugar and television production.

“I never knew that I was going to go this way, running a business, calling all the shots,” she says.

“You’re the final decision maker. I have to defer,” says Dave Sideserf, who juggles the baking (“I was already comfortable in the kitchen,” notes the former line cook) and business (which for this enterprise means heavy lifting in social media, commerce and video). 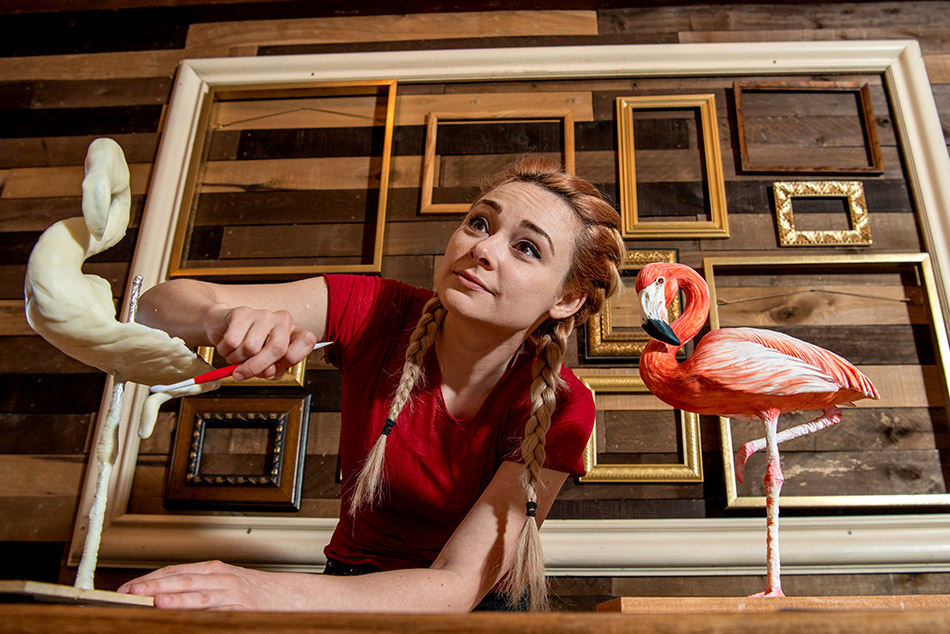 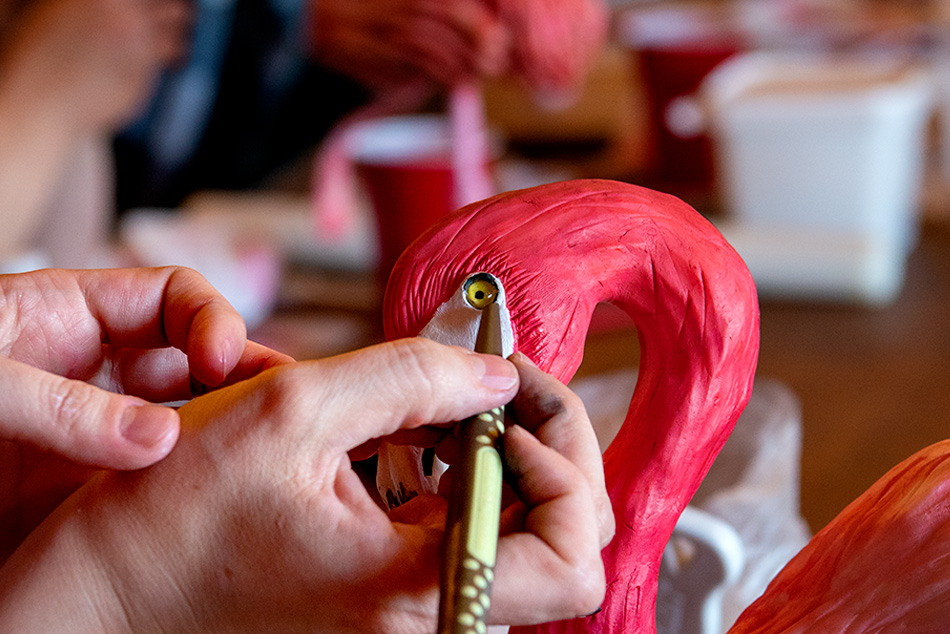 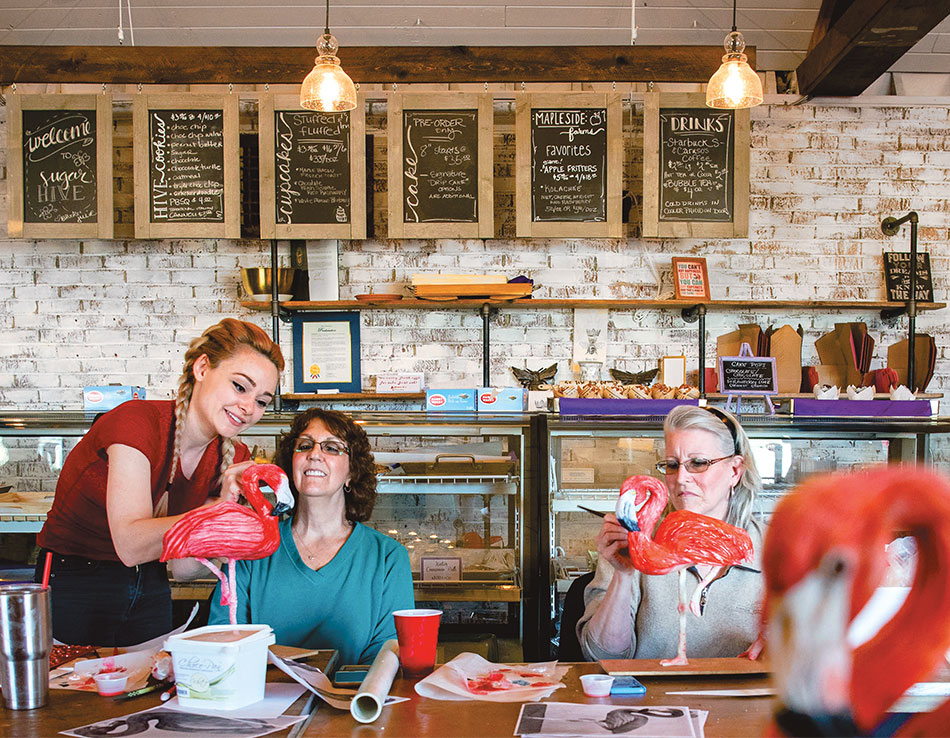 Natalie Sideserf is, above all, an artist. And she’s the kind of artist — just as she was in studio classes in Hopkins Hall — who’s as much or more interested in demonstrating what she doesn’t know as what she does. Her art education, with a concentration on drawing and painting, “definitely influences everything I do today.” Her approach to treat “each cake as a little sculpture,” she says, “came naturally out of my experience at Ohio State.”

Sideserf credits this largely to the emphasis faculty and other artists and mentors put on “teaching us to experiment, to really think about how you can use materials and tools in new ways. We were encouraged to stop looking so much at the result but to appreciate and learn from the experience.”

She recalls so many who inspired and encouraged her as an undergraduate, from Luis Contreras, who taught beginning drawing and now lives in Texas himself, to beloved Professor Todd Slaughter, whose sculpture classes’ exploration of 3D was such an influence as she learned to work in wire, plaster and clay. “When I’m able to try out new materials, I took what I learned at Ohio State when I was working with new materials,” she says. “It was so much like taking Professor Slaughter’s class when I first started.

Interested in upping your own cake game? Follow the link to learn some industry secrets from Natalie and Dave Sideserf. 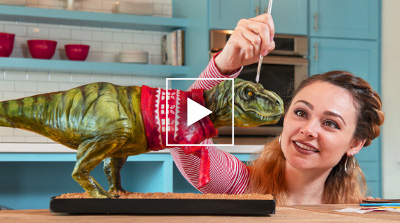 “That’s what’s so great about the art and design departments at Ohio State,” Sideserf adds. “They’ll show you the technical aspects with great precision. ‘This is how you use it.’ Then you get to go figure it out on your own.”

Once she really had to figure it out on her own, she found that others working in the medium of cake, not surprisingly, tended to have backgrounds in baking rather than fine art.

“There were things I was told again and again that you can’t do with cake,” she says. “So I just thought back to my time in Columbus. It was a real opportunity to experiment, to learn how to use materials as we were always encouraged to do. I approached these cakes like any other art medium.”

The art of sculpting cake

When Sideserf set out to make her first sculpted cake — a cow skull for a friend’s birthday — she had no precedent to follow.

“I just dove in,” she says. “I’d seen what they were doing on the baking shows, but I’d never seen anyone carve a cake.” She had no culinary or pastry training. Her key ingredient was a boxed cake mix.

“It was far from perfect, but it came out decent,” says Sideserf, based in Cleveland at the time. “And I realized there was something cool here, in working with a medium I didn’t know. I decided to get involved in cake and learn how to use these materials.”

A couple of years later, Natalie and Dave moved to Austin, where she worked in a bakery and learned the basics, such as how to stack a tiered cake. But there were no cake artists with whom she could apprentice. And no one was practicing in the kinds of realistic sculptural forms and faces that most appealed to her.

She looked to her background at Ohio State as her guide for breaking new ground in cake. “I went into it kind of fearless because of what I learned in studio class,” Sideserf says. “I could stop looking at the results, but could instead look at the process, the tools, the materials.” 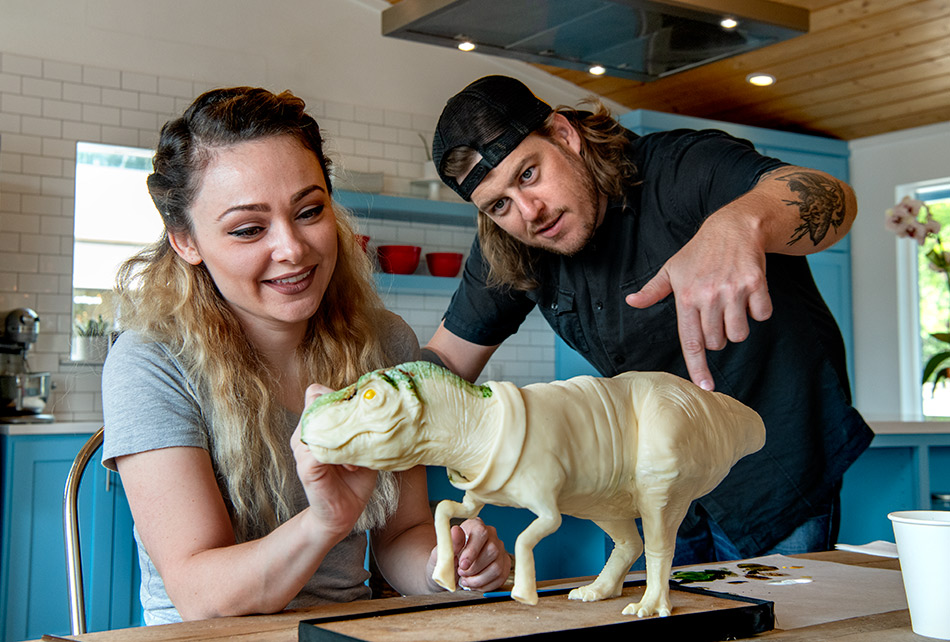 Natalie and Dave work hand in hand to make Sideserf Cake Studio the growing enterprise it is.

This led to her referencing not fine French macarons or delicate mille-feuille pastry but weighty, enduring classical busts in stone and marble. She started drawing 3D renderings to scale, calling on the Leonardo da Vinci sketches she’d studied, her time at the pottery wheel, the different parameters of sculpting in clay and wire to inform her new work — in modeling chocolate.

In 2012, when Sideserf was about a year into this experiment in sculpting cakes, it was a Willie Nelson bust she made — so realistic one might expect it to pass a joint — that brought her national attention, including from the subject himself. The creation took first place at a That Takes the Cake food show. And it swept social media after Sideserf’s brother, who was living in Tokyo, posted it on Reddit, where it climbed to No. 1.

“People started reaching out from around the world,” Sideserf recalls. “It was crazy. They thought it was outrageous. They’d never seen anything like it.”

Willie Nelson put a face on what would become a business a year later. “It was a turning point,” Sideserf says. “We realized we were really onto something, and we need to continue experimenting with cake in this artistic way.”

The experiment continues right through today and whatever comes next. For 2019, that’s likely to be an expansion of the couple’s Austin enterprise. And one day, “we’d like to open something in Ohio, because we love Ohio,” says Sideserf, who gets back home a few times each year, including this past spring for her induction into her high school hall of fame. The couple also remain plugged in to television opportunities, with lots of possibilities ahead.

Meanwhile, Sideserf appreciates all the organic, nonlinear turns — not unlike the curve of a flamingo’s neck — that informed her journey from undergraduate to pastry innovator to entertainer.

“It’s not like you can really go to school for sculpting cakes,” she says, “but the Ohio State connection is definitely there. That support as an artist as you find your way is invaluable.”

The fun and the faces are always baked in, too. “I take my work seriously, but I also like to keep it light,” Sideserf says. “It’s a cake! It’s a frivolous thing. It’s about celebration. Yes, you’re making a sculpture, but then you eat it. Everyone gets to look at it, smell it, taste it, then watch it go down to the bones. It’s about appreciating and remembering a moment and the people you want to share it with.”

Amy Goldwasser is a freelance writer, editor and frequent consumer of cake in New York.