It takes four minutes to travel from South Waterfront to Marquam Hill — 3,300 linear feet — on the Portland Aerial Tram.

Where I live: Portland, Oregon

Whether you crave outdoor adventure or out-of-this-world tastes, Buckeyes in Portland say their city delivers.

When buckeyes fall into Portland, Oregon, they tend to land on a hiking trail.

“It’s hard to meet people who live here who aren’t into the outdoors,” says Kana Arreguin ’07, a physical therapist who moved to Portland two years ago with her husband, Ray. The Columbia River Gorge, which divides Washington and Oregon, is one of their favorite hiking spots. “It’s the prettiest thing I have ever seen,” she says.

A business opportunity brought John Bruns ’83 to the area 25 years ago, but it’s the landscape that continues to excite this president of the Alumni Club of Portland.

“I’m a big outdoorsman, and this to me is the best outdoors in the country,” he says. “You’re an hour and a half from anything you want to do.”

And Bruns, whose company represents power industry manufacturers, likes to do it all, from skiing Mounts Hood and Bachelor to catching Dungeness crab on the coast. When he wants to stay in town, Bruns looks to Portland’s Forest Park, home to some 60 miles of hiking trails.

When a job offer drew Dan Jaynes ’04 and his wife, Ellen Crivella ’03, ’06 MS to Portland, Crivella had misgivings. “I thought, ‘No way. It rains there all the time,’” she says, and she didn’t like the idea of being so far from family and friends. Then they arrived, Crivella says, “and it was just absolutely beautiful. It really was the perfect fit for us — the combination of like-minded people, the outdoors, the good food scene, people who do all sorts of things as professions: artists, tech startups and everything in between.” Crivella and Jaynes work in the renewable energy field. 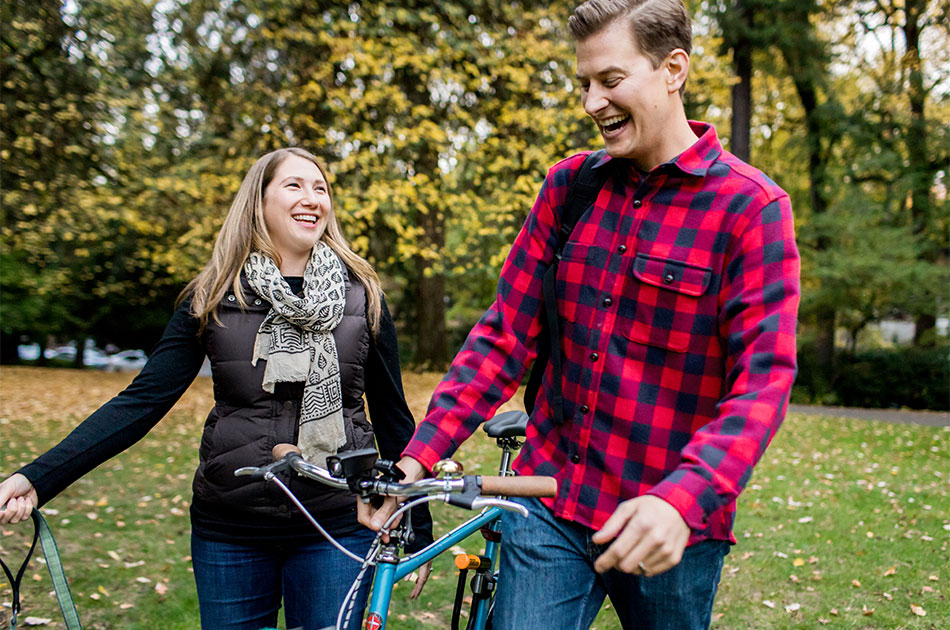 Although both also love the outdoors, Crivella describes her husband as “a crazy outdoor adventure man” who this year took a six-day camping trip through the Oregon wilderness with only what he and his friends could carry on bikes. In contrast, Crivella is “much more of the in-town foodie girl.”

Portland caters to those interests, too. In keeping with the city’s environmentally responsible culture, farm to table is a hallmark, with restaurants featuring an abundance of salmon, huckleberries, marionberries and whatever mushroom is in season. Tasty festivals fill the calendar: ChocolateFest in January, Dumpling Week in February and Portland Pizza Week in April, to name a few.

If it’s fine dining you desire, “head to the Pearl,” as locals say. The Pearl District hugs the south side of the Willamette River and boasts “gorgeous buildings and fancy restaurants,” Arreguin says. “At the same time, I could probably count on one hand the number of restaurants you shouldn’t go into in tennis shoes. There’s no judgment. It’s just a very casual, inviting city.”

And so are the lakes around Portland for this swimmer and vet of four triathlon relays. “I really love swimming in the open water,” she says, “because the lakes here are clean and safe.”

Two other neighborhoods worth exploring are Slabtown and the Hawthorne District.

Kelsey Hukill ’10 says Slabtown “was a gritty industrial area in its heyday, but fell by the wayside when those industries left or closed.” Now it touts great restaurants, breweries and more. Leigh-Ann Crivella ’14, Ellen’s sister and a glass artist, is drawn to the Hawthorne District for its shopping and artsy vibe.

Although a state license plate identifies Oregon as a “Pacific wonderland,” as many as seven months of the year are rainy.

Hukill, director of alumni relations for the Clark College Foundation, says a native Pacific Northwesterner gave her survival advice: “Get a good raincoat. And don’t let [the rain] get in the way.” Toward that end, Hukill has the Holiday Half half-marathon on her December to-do list.

“One thing I learned since coming to Portland,” says Jaynes, “is that it’s not about escaping the rain, it’s about embracing it.” For him, that means biking to work every day, rain or shine. And for a respite, he and Ellen join other Buckeyes for a weekend every February in sunny Bend, Oregon, in the high desert. 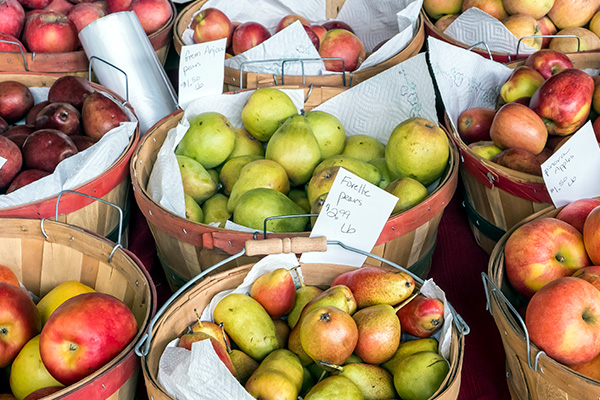 Pears and apples aplenty in Portland

If you’re heading out to hike the Columbia River Gorge — and you’re in Portland, so why wouldn’t you? — you’re going to need to fuel up first. “Brunch is like a religion,” says Kelsey Hukill, and Mother’s has some of the best. Lovejoy Bakers is a sweet choice for Kana Arreguin. Her guilty pleasure? “Probably all of their cookies. They’re big and soft and so tasty.” If you just need a little caffeine to start your day, Arreguin’s favorite coffeehouse is Heart.

On Saturday mornings, stop by the year-round Portland Farmers Market, maybe the one at Portland State University. In addition to 100-plus local vendors, this market offers live music, children’s activities and cooking classes.

There’s a city block of shelves to peruse at Powell’s City of Books, said to be the nation’s largest independent bookstore. “It’s half book store and half community gathering space,” Ellen Crivella reports.

When your thirst for adventure turns into just plain thirst, Crivella and Dan Jaynes recommend Upright Brewing, their favorite in a city fast becoming known for breweries.

On the edge of historic Ladd’s Addition is Ladd Taphouse, where Buckeyes gather for game watches and other events.

Catch up with the Alumni Club of Portland.

Find a club and/or society