Sarah Raies, left, and Kat Missig play pool at Lincoln Station, within view of the Biograph Theater made famous by John Dillinger and the FBI.

Where I Live: Chicago

Chicago Buckeyes are a hardy bunch, embracing their windy city in every season. Come join them.

Sarah Raies ’17 tends to look (quite literally) at the bright side of Chicago this time of year, a sound practice when your new hometown is renowned for biting temperatures and gale-force winds.

Chicago has “an extra little spark to it” through the winter, says Raies, a transplant from Portsmouth, Ohio. “It’s a little bit darker, so I feel the city’s even more beautiful with all of the lights, commuting back and forth early in the morning, late at night.”

But tromping through the white stuff after work? Not so much. In fact, she and other Chicago-based Buckeyes say they’re more likely to live their social lives close to home in the winter, which doesn’t pose a problem in their vibrant city. 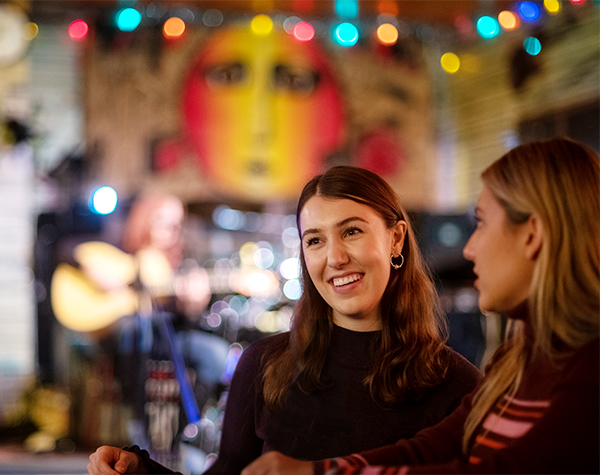 Raies and Missig are regulars at Kingston Mines, where they can dance to live blues and jazz into the wee hours.

When Raies and her roommate Kat Missig ’17 “get a little stir crazy from being inside,” they venture into their busy Lincoln Park neighborhood.

Raies also remembers waiting out the winter of 2019 (and its extraordinary cold) at Lincoln Station, a neighborhood bar and grill where she and Missig enjoy an occasional game of pool. “That was a fun after-work activity,” she says, and (bonus!) it’s free on Thursdays.

Sean Hickey ’16 lives just north of Lincoln Park in Lakeview. “One of my favorite microbreweries is called Corridor Brewery and Provisions. They’ve got a rotating menu every week as far as what’s on tap,” says Hickey, president of the Alumni Club of Chicago and a business manager at JP Morgan Chase. “It’s also a great restaurant,” featuring a locally sourced menu designed to pair with Corridor’s beers.

Rachel Nash ’16 and Frank Gao ’01 MS have found another way to make peace with the weather: spas. Nash, who works for PepsiCo and is club vice president, recommends Aire Ancient Baths near the West Loop. “It’s got a bunch of steam rooms and different ways to relax, but it’s all heated, so it’s a warm environment to escape in.” A patent and trademark attorney, Gao favors King Spa and Sauna in Niles, a northwest suburb. “I really enjoy going there,” he says, “especially in wintertime.”

The holidays make it easier for many Chicagoans to embrace winter, and Nash has a tradition of attending Christkindlemarket. Inspired by its German equivalent, there are shops to visit, hot chocolate to sip and other holiday treats to take in. “It’s really fun to go, even just to wander around and look at all the Christmas decorations,” she says. “It feels kind of like you’ve left Chicago, but it’s just tucked away in a square right in the middle of the Loop.” Chicago’s original Christkindlmarket, in Daley Plaza, runs until Dec. 24. A second market, in the Wrigleyville neighborhood, is open until Dec. 31.

Off the beaten path

Sure, Chicago is known for its grand museums — the Art Institute, Field Museum, Shedd Aquarium — but Buckeyes also have found hidden gems well worth exploring in their adopted city. 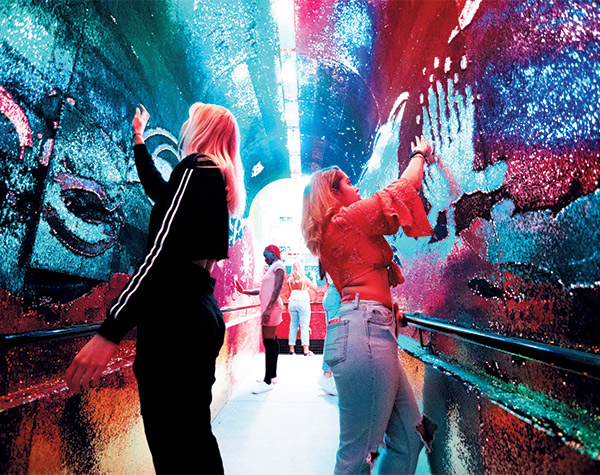 Chicago’s Wndr Museum features world-class art, work by emerging artists and visitors’ creations, all of which contribute to a unique journey for patrons.

The Driehaus Museum preserves and celebrates the art, culture and architecture of the late 19th century. Bartling describes this mansion on the northside of Chicago as “a beautiful, beautiful place” that dresses itself “even better” for the holidays.

The Wndr Museum is an interactive art museum in the West Loop that features the city’s first infinity mirror room. “It’s less about taking in and looking at a work of art and more about seeing an optical illusion in the room, or taking in fun colors, or just taking fun pictures with your friends,” says Nash.

Wrightwood 659 could be easily passed by, tucked in among family homes in the Lincoln Park neighborhood, but it shouldn’t be missed, Hickey says. “You kind of get the small museum atmosphere but you also get a chance to take your time and enjoy it at your leisure.” Beginning in February, the museum will feature a show of material art (think plastic, water, wood, hair, gunpowder, cola) from China.

As calendar pages flutter off in the Windy City, it’s soon time for a Valentine’s Day dinner out. Whether it’s February 14 or another date night, both Nash and Ann Sisinger Bartling ’61

love a restaurant with a view, and they say there’s none better than Cindy’s, which sits atop the Chicago Athletic Association Hotel. “You can see all of Millennium Park and the Bean, which when you think of Chicago, you think of the Bean,” Nash says. Bartling also thinks highly of The Signature Room at the 95th, offering fine dining with sweeping views from the former John Hancock Center.

Gao is looking forward to next year’s Chinese New Year parade, coming February 2 to launch the Year of the Rat. The parade “is a huge event, so people have a lion dance in Chinatown” and turn out by the thousands for marching bands, colorful floats and dancing dragons.

The Alumni Club of Chicago has more than 6,000 members. To learn more about the club, check out its website, chicagobuckeyes.org, or contact the president, Sean Hickey ’16, president@chicagobuckeyes.org. Live outside the Windy City? Rekindle Buckeye friendships and make new ones by exploring an alumni society or a club closer to your neck of the woods.