Leading the way for farmers

Bill Richards ’53 began experimenting with no-till farming at Ohio State in the 1960s and spent his career encouraging its use worldwide.

Bill Richards ’53 looks back on his days as a college student and chuckles about being the person in class who asked the questions.

Richards credits Ohio State for nurturing his inquisitive nature, which led him to adopt regenerative farming techniques and advocate for them as head of the U.S. Department of Agriculture’s Natural Resources Conservation Service from 1990 to ’93 under President George H.W. Bush.

“Ohio State, and the contacts and education I got there, really taught me that you can dream, you can try different things, you can innovate,” says Richards, a 1994 Ohio Agricultural Hall of Fame inductee.

“I’m proud of the fact that Ohio State is really the cradle of no-till,” says Richards, who has run his family farm in Circleville, Ohio, since 1954.

The Triplett-Van Doren experiments led Richards, after he graduated, to forgo tilling his own land and to leave stalks from the previous year’s crops on the fields. He credited George Hamrick ’51, ’59 MS for encouraging farmers to use no-till farming in his role as an Ohio State County Agricultural Extension agent from 1955 to 1984.

“Everybody thought we were crazy because we were really doing something different, but we had the science behind us,” says Richards, who befriended Rattan Lal in 1988.

Richards says no-till farming became more popular during his tenure at the U.S. Department of Agriculture, but the United States has since fallen behind Australia, Brazil and Canada in its use because the financial payoff takes longer than the short-term needs of many farmers who rent their land.

“Science will win in the long term,” Richards says. 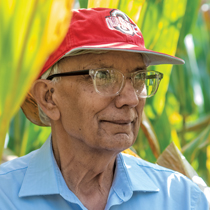 In just a handful of soil, Rattan Lal ’68 PhD sees the key to feeding people, to preserving their land for generations, to making Earth a better place for all of us. This connection, and this message he’s now spread around the globe, began 60 years ago in India, when a boy seized a chance to learn.