Being blind didn’t stop Greg Daniel from marching with the band. 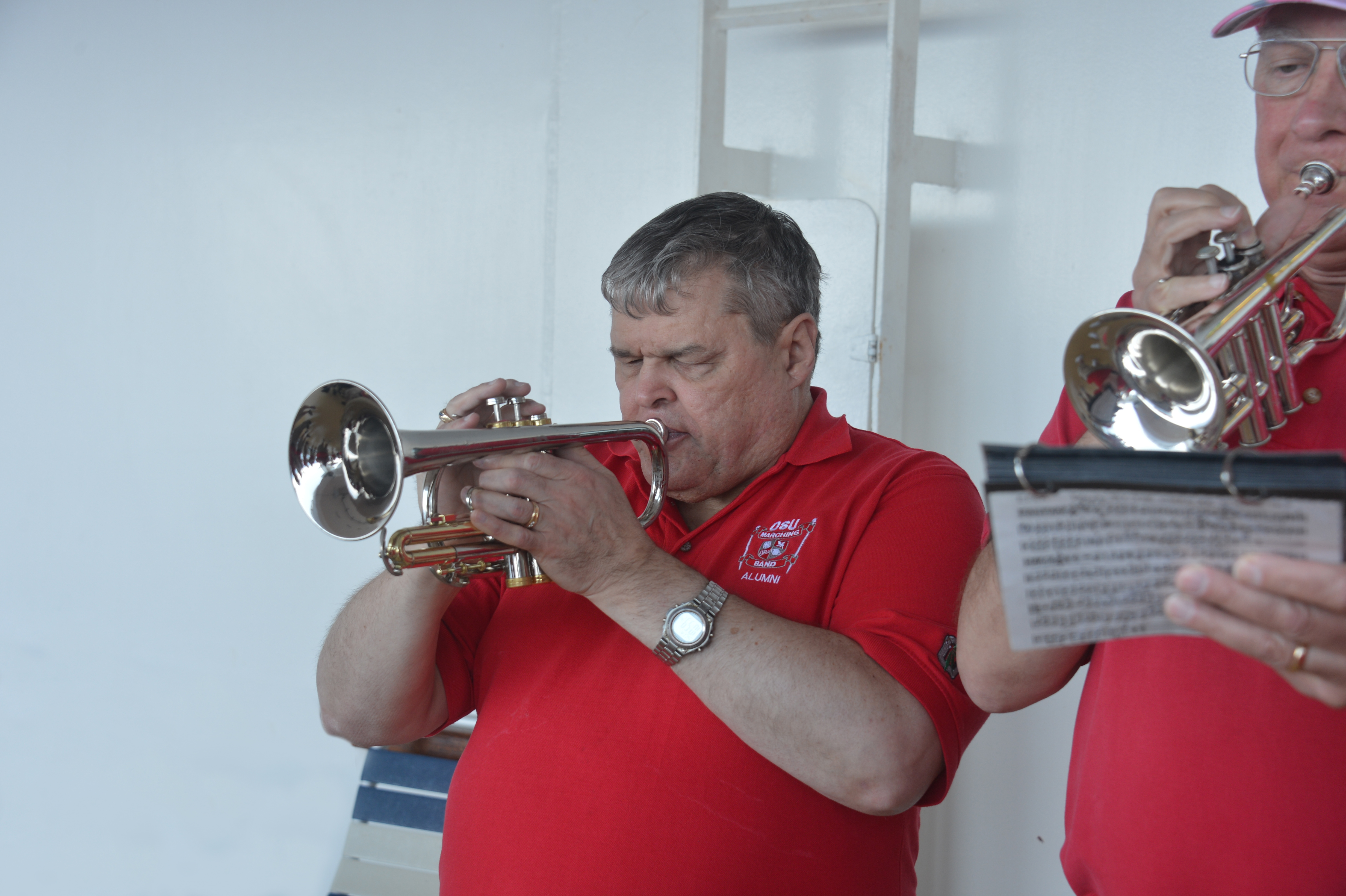 Members of The Best Damn Band in the Land must be in top physical and mental shape to complete Script Ohio and other complex routines. One misstep or attention lapse could be embarrassing, even dangerous.

Even after picture-perfect practices, marchers sometimes drift from their lines. When that happens, they use visual landmarks on the field or in the stadium or other venue to regain their orientation.

But what if a band member can’t see?

Greg Daniel, cornet player, was a band alternate as an undergraduate and currently serves as co-chair of the Hyper Active Band, a small group of alumni who play at events to raise money for TBDBITL scholarships.

Daniel, 61, has been blind since age 6. To march, he relied on sound, on music embossed into Braille and on his band family.

“I’d listen to people behind and beside me, and that’s harder to do when there’s 80,000 people in a stadium,” Daniel said. “I’d always hope to get someone who could just blow the lacquer off the horn right behind me. It would be like someone else using the rearview mirror to drive forward.”

Daniel said his first year in the band was a learning experience, but he vied every week of his last three years for a starting spot. He never did earn a regular spot, but he marched in from the sidelines to play for the last two songs of his final home game, against Michigan in 1974, and then marched off with the band.

Five years later, he marched with the Reunion Band in Script Ohio at a football game, the last time he has been a part of that formation. He held the elbow of the bandmate in front of him as a guide.

Daniel has tales of broken noses and other injuries suffered during the crossovers needed to complete Script Ohio and other routines. He is no hurry to do it again.

“There ought to be studies done of anxiety while going through crossovers,” he said with a laugh.

Daniel attended the Ohio State School for the Blind in Columbus as a youngster and learned to play the cornet from a TBDBITL alum who was teaching there. When he returned to his hometown of Shelby for his sophomore year of high school, the band director asked him to join the group.

“I didn’t know a thing about marching but I knew about memorizing music, and that’s what they did,” Daniel said.

In his first two years he did concert formations only, but he marched during his senior year.

After being admitted to Ohio State, he contacted the band director and received the OK for a tryout.

Daniel remembers the date: Sept. 19, 1971. T-row with the other cornets. He stayed with his squad and away from the administrators. He wanted to be treated like everyone else and learn the music and formations with everyone else. During breaks, another band member took him aside and showed him physically what to do with steps and with his horn.

“Anything visually, they would either explain it to me or show me,” Daniel said.

He graduated in 1976 with a bachelor’s degree in mathematics education, and that attitude of inclusion continued into his days as a band and university alumnus.

“‘We will help you.’ Those were the best four words I heard,” Daniel said of his welcome from the band alumni. “But they also allowed me to help them in ways that I can,” which has included leadership of, and service to, the alumni band organizations.

Many alumni play in all three of the bands, which are volunteer groups. The Reunion Band has hundreds of members who play at one football game per season. The Active Band plays year-round at concerts, parades and other events. The Hyper Active Band mostly plays at wedding receptions and graduation parties.

“I always tell them we’re the only tax-deductible part of their wedding reception,” Daniel said. There is a fee for about 25 minutes of Hyper Active Band entertainment, and all the money goes to fund band scholarships.

Daniel worked for 35 years for the state of Ohio as a computer programmer and software tester before retiring in 2011. He and his wife have two grown children.

Co-workers used to ask Daniel what he had in common with the 20-somethings he would interact with.

“Are you kidding me? We’ve got band stories that never end,” he said.