This month marks the 75th anniversary of a beloved Buckeye tradition—Script Ohio. 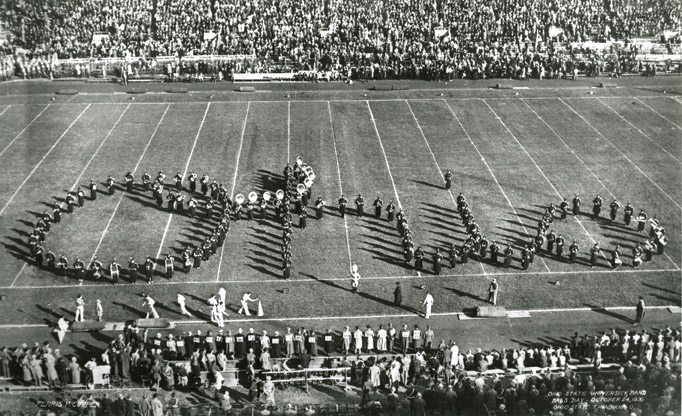 First performed in Ohio Stadium in October of 1936, Script Ohio is the signature formation of The Ohio State University Marching Band.

A bitterly contested fact: the University of Michigan's marching band first scripted an "Ohio" formation in Ohio Stadium four years earlier. But, as OSU alumni band member Ted Boehm points out, the "incomparable" Script Ohio requires "the triple revolving block Ohio as the lead-off formation, the peel-off into the script movement, the interlaced shoestring movement, the pervasive driving beat of the venerable Le Regiment de Sambre et Meuse, the dotted 'i,' and the concluding vocal chorus."

As we celebrate 75 years of this trademark tradition, we also salute marching band director Jon Woods, who announced his intention to retire at the end of the 2011-12 academic year.

Read more about this signature move in University Archives' blog, "From Woody's Couch, Our Playbook on OSU History":

"It wasn’t until...October of 1936, that the OSU Marching Band first performed Script Ohio in Ohio Stadium. There is some debate over which game exactly: It was either on Oct. 10 when OSU went up against Pittsburgh or Oct. 24 when OSU played Indiana."