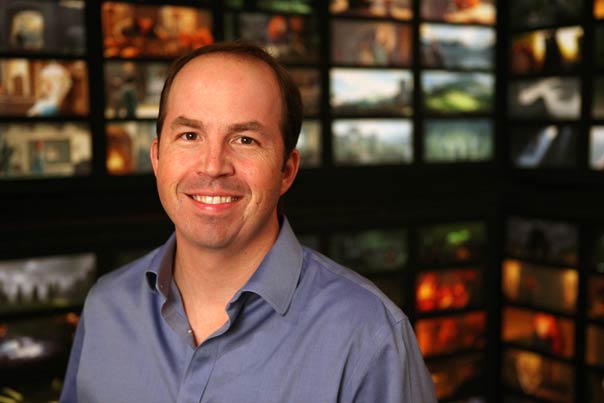 In 1984, the black-and-white Nintendo Entertainment System was still a year away from its U.S. release; the first version of Tetris had just been created in Moscow.

Sixteen-year-old Steve May was used to the barebones video game graphics that defined the era. But a story in Science that year--focused on new "amazing computer-generated imagery"--fascinated him.

Best of all for the Mansfield teen? It was happening at Ohio State's Advanced Computing Center for the Arts and Design, a trailblazer in the field of computer animation.

Three Ohio State degrees later, May is a shining star at Pixar, where he's worked on Up, Cars, Finding Nemo, and Toy Story 2. (May earned a bachelor's in 1990, master's in 1992, and PhD in 1998, all in Computer and Information Science.)

For Brave, which opened at No. 1, May oversaw and developed technology used in the film; ensured the movie lined up with the director's creative vision; and supervised animators.

"I loved school," says May, who also served as Ohio State faculty for 12 years. "I studied computer graphics and animation, so it directly applies to what we do at Pixar."

"I visit Ohio State every chance I get."

“We have some of the most established professionals throughout the animation production and computer graphics industry--at places like Pixar, Dreamworks Animation, Apple, Microsoft.”
—Maria Palazzi, ACCAD director

When Charles Csuri and Tom Linehan teamed up to create ACCAD in the late 1970s, they envisioned a multi-disciplinary center where computer science engineers and artists worked together.

"ACCAD is still very unique," May says. "It is one of the few research centers I know of that puts artists and computer scientists together. It is that combination of art and science mixing together that is so powerful creatively and gave rise to the industry of computer animation."

That combination has led to alumni who are "some of the most established professionals throughout the animation production and computer graphics industry--at places like Pixar, Dreamworks Animation, Apple, Microsoft," says Maria Palazzi, ACCAD's director.

The alumni are eager to reach back to students, Palazzi adds.

Case in point: Fran Kalal, the digital tailor who fitted the dresses of Brave's main character, Merida. Kalal (2005 and 2008, BA and MFA in Design) comes back to Ohio State on recruiting trips, and has joined fellow Pixar Buckeyes in panels where they discuss their work with students.

Ohio State and ACCAD "helped prepare me for a career where I get to learn and discover constantly," she says. "They taught me to question why things work the way they do and look for ways to improve them. My time at ACCAD was truly formative and wonderful."