As a new school year arrives, it's a beautiful time of year to take a closer look at campus, whether you're a first-year student or an alum coming home to visit.

For 144 years, The Ohio State University’s campus in Columbus has been the stage for academic achievement and a laboratory for innovation. It is where friendships are forged. It’s where rivalries and revelry are born.

As another school year gets underway, up your Buck-IQ and connect with the generations of students by taking a closer look at the following spots.

Completed in 1873, University Hall housed everything – the library, classrooms, a chapel, a male dormitory and faculty apartments.

Its structural integrity was deemed unsafe in 1968, and the building was torn down in 1971. However, this 1976 replica does retain some originality: The tower clock, entrance and pillars were parts salvaged from the original building.

Want to connect with generations of students of another era? Visit the University Museum. In addition to great archival photos and memorabilia, there are bricks from the original University Hall, a piece of the tin ceiling and one of the blackboards used to educate Buckeyes past.

View a piece of college football history on the second floor of the Ohio Union, where Archie Griffin’s 1975 Heisman Trophy – his second – is on display.

Learn more about Ohio history by visiting the limestone carvings on the southern façade of the Ohio Union. These scenes are familiar to many alumni, as they were included on the exterior of the original Ohio Union before it was demolished in 2006.

Orton Hall and Hayes Hall – both completed in 1893 – are the oldest buildings on campus.

Hayes Hall was named after President Rutherford B. Hayes, Ohio’s governor when the state accepted the federal Morrill Act, which eventually established Ohio State as a land-grant institution. Generations of Buckeyes have shared secrets via the building's "whispering arch" facing the Oval.

Orton Hall, named after Edward J. Orton Sr., the university’s first president and the state’s third geologist, is rich with details. Some highlights:

Ohio Field was located at the corner of 18th Avenue and High Street, with the first game taking place in 1898. Two decades later, fans scaled trees and utility poles because there wasn’t room enough in the stadium to watch the great running back Chic Harley. The case was made: Ohio State football had outgrown its field.

While scoping out this spot, cast your eyes east of High Street to the building façade depicting a football player mid-punt. It is an homage to Harley’s feats on the field.

Communing with nature is easy

Escape to the rooftop gardens at Knowlton Hall and Howlett Hall, or quiet your mind walking through the labyrinth garden at Chadwick Arboretum & Learning Gardens.

Those planning to study on the Oval can find shade – and a bit of campus history as well.

The Constitution Tree, located on the south side of Hopkins Hall, was once part of an entire grove of trees that lined the Oval during the university’s founding. The tree is verified to have lived there before the signing of the U.S. Constitution.

Did you know there is a fraternity that lives on the Oval year-round?

Horticulture students from the Class of 1891 planted a grove of English Elm trees on Arbor Day on the Oval as a way to honor their class for decades to come. “The Five Brothers” stood tall between Orton Hall and the Long Walk for 80 years, until Dutch Elm disease ravished them in the 1970s.

During the celebration of the university’s 300th commencement, five Eastern Red Oak trees were planted on the site to restore a beautiful campus landmark.

Dine at the home of the Drumstick

Tom Parker just wanted to keep his company’s ice cream cone crisp for customers. Two Ohio State professors developed a way to coat the inside of the cone with chocolate, and the Drumstick was born.

Our planetarium is out-of-this-world 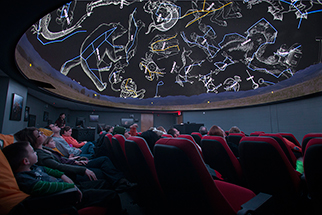 Ohio State has had a planetarium on campus since 1967, but it recently went through a tremendous transformation. Now, visitors can zip around the world and galaxy without ever leaving the comfort of one of the 60 high-backed seats.

The Ohio State Planetarium, on the fifth floor of Smith Laboratory, offers programs given by knowledgeable graduate students. Ohio State students can attend public programs and roof nights, when a powerful, computer-controlled telescope is used to observe exciting astronomical objects up close.

The Freedom Train ran right through campus in the mid-1800s, and there are five markers on campus showing the route.

Escapees followed Neil Run (near the Olentangy River) past the Neil Farm (near the RPAC) and through a swampy bog that is now Mirror Lake. The water forked in two directions that they would follow – either toward Hale Hall or toward the Ohio Union.

The last stop was the home of Robert Neil, at the corner of Indianola and 15th avenues, which is the home of Kappa Sigma today. There, escapees were directed toward Lake Erie – and freedom.

A treasure trove of tradition

The Ohio State University Archives preserves Buckeye history and makes it available to all who visit its headquarters on Kenny Road. In addition to more than 2 million photographic images of university life from 1870 to present, the archives contain documents, records and mementos that are part of the Ohio State story.

Archivists also publish From Woody’s Couch, a must-read blog for those who love to soak up Ohio State history.