"Opportunities for the people of Ohio"

President Michael V. Drake took his 2020 Vision on the road this summer to the small towns and big cities of Ohio. He shared details of his plans for making college more accessible and affordable while continuing to invest in excellence in teaching at Ohio State.

President Michael V. Drake spent part of the summer touring Ohio and sharing his vision for making college more accessible and affordable while continuing to invest in excellence in teaching and research.

While meeting with legislators at state fairs, fielding questions from business leaders over breakfast and chatting with Ohio State students and parents on the banks of the Ohio River, Drake discussed details of his 2020 Vision, including the new President’s Affordability Grant program and implementation of the university’s first comprehensive cost freeze in at least 40 years on tuition and fees for in-state undergraduate students.

“We want a greater percentage of our citizens to be able to have a college education, our young people who will be the leaders of tomorrow,” Drake said at a breakfast meeting with the Champaign County Chamber of Commerce.

“It’s our job, particularly at public universities, to make a college education available to people from our community, from our region to be able to grow the quality of our enterprise.”

Keith Faber, president of the Ohio Senate, was seated next to Drake during that breakfast roundtable in Urbana. The Legislature increased its funding for higher education in its most recent budget, and Faber applauded Ohio State and Drake for immediately expanding aid to in-state students and their families.

“(President Drake) led the pack to lead Ohio institutions into that position. That leadership is something that states a lot about where he comes from and a lot about where we want to go in the Legislature,” Faber said.

Drake said the state’s increased support has made it possible for Ohio State to expand aid without affecting the university’s ability to recruit and retain the “faculty of the future” and support its innovative work.

“We want affordability, access and excellence all to improve as we move forward.”

As students return to campus for the fall semester, many are benefiting from the access and affordability initiatives launched over the summer. 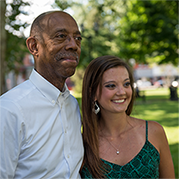 For Brace and her family in Gallipolis, Ohio, reducing the need to borrow now will make a big difference after graduation. It means Brace will be able to focus on the important job of teaching future generations instead of worrying about repaying loans.

“I think there are a lot of families who work really hard. When universities like Ohio State pay attention and realize that people can’t always pay for college – as much as they want the opportunity – it means the world,” she says.

“It means that you can work hard and achieve something.”

14: The towns and cities he visited

88: The counties in Ohio – all of which have at least one student receiving a President’s Affordability Grant

$100 million: The amount by which President Drake’s vision would grow the need-based grant pool at Ohio State over the next five years.
You can help.