'Honor of a lifetime'

Game day hype builds to one big moment for Ohio State’s 60th drum major, Nathan MacMaster. Standing at the top of a long, dark ramp, listening to the roar of 100,000-plus fans – he focuses on the job ahead and relies on the decades of tradition behind him.

In a 1930 game against Navy, the Ohio State marching band wowed the world with the very first “floating formation” – an anchor that moved downfield as musicians performed Anchors Aweigh.

Not only did fans in the stadium go nuts, but The New York Times even wrote about band’s innovative halftime show that day.

Today, not much has changed for The Ohio State University Marching and Athletic Bands. Videos of the band’s halftime shows have garnered millions of views on YouTube – often going viral before the final seconds tick off the game clock. During the 2014 season, the band received news coverage from more than 1,000 media outlets worldwide.

The following is our primer on the tradition and innovation two-step that is engrained in the Pride of the Buckeyes.

The band came before football. The band’s beginnings date back to 1878 as a military drum and fife corps performing music for cadet drills on campus.

But Woody gave us TBDBITL. Ohio State football coach Woodrow Hayes was the first to dub the band as “The Best Damn Band in the Land.” Not only did the name stick, but the acronym also is common vernacular among Buckeye Nation. 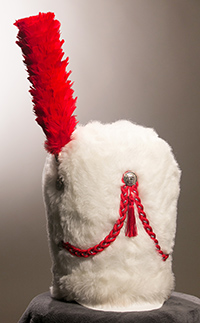 It's called a busby.

Making an entrance at 180 beats per minute. The marching band’s elaborate entrance down the ramp on the north side of Ohio Stadium can induce chills. Percussion is the first to march onto the field at a rapid tempo of 180 bpm. The ensuing fast cadence is played exactly 17 times in a row. Listen closely, and you may hear the percussionists chanting “O-H-I-O, Ohio!” in time.

The uniform has not changed since 1930. It was designed to replicate an ROTC uniform and includes 26 pieces.

Look closely at the color. That fabric is not actually black – but dark navy. Uniforms are made of 100 percent wool. Think about that during those early games in the season when sunscreen and lots of water are necessities.

Script design inspired by a marquee. Band Director Eugene J. Weigel came up with the idea for “Script Ohio.” The formation design was based on the marquee sign of the Ohio Theatre on East State Street.

The “i” was first dotted by a cornet player. It wasn’t until the game against Michigan in 1936 that a sousaphone player dotted the “i” – a tradition students have repeated more than 800 times since.

Today, there are 225 musicians in the all-brass band. They fill six buses or two jet planes when traveling for an away game.

86 percent of band members major in something other than music. These student-musicians major in everything from English to engineering to mathematics to nursing.

They’re good citizens, too. Community outreach is ingrained in the band’s culture, with band members volunteering their time and talents with organizations including the Ohio State School for the Blind, Gladden Community House and the Honor Flight Network. 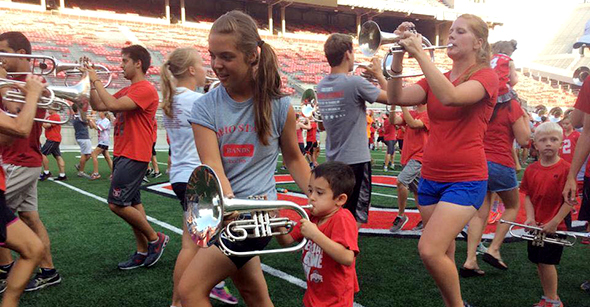 Band member Emily Balzer assists a child with marching during a Nellie’s Catwalk for Kids charity event in September 2014.

365,000: The cumulative hours those students dedicate to practice in a year.

Today’s band is helping the band of the future. The Ohio State Marching Band offers a summer clinic for high-schoolers and out-of-town students who want to improve their musicianship and marching skills. In addition, an app (for Apple products) is available to help aspiring band members learn the marching fundamentals, school songs and traditions of the band.

10,000: The number of screaming fans in St. John Arena on Saturdays during the band’s Skull Session. Because band members do not carry music as they march, this event was intended to provide a final practice run-through of the show to help the musicians keep the week’s music in their skulls. Skull Sessions started in the 1930s and were closed to the public; today, they are full-fledged pep rallies.

They're known around the world. The band’s halftime performances have garnered more than 45 million views on YouTube – with their moonwalking and cannon-firing formations being applauded long after Saturdays in the 'Shoe.

111,000 likes and counting. TBDBITL is the most popular college marching band on Facebook.

And then, there was that national commercial for Apple.