Innovation in the Andes

Ohio State is known around the world for its climate change research. Now, scientists are using new ideas to study melting glaciers in the Peruvian Andes.

In Huaraz, Peru, it's easy to see the potentially devastating effects of climate change.

About 150,000 people in the town live and work alongside glaciers; the melting ice provides much of Huaraz's water during the dry season. But as the melting continues, flooding and water shortages will be disastrous to a region economically dependent on farming.

The Peruvian glaciers and wetlands tell the story of climate change, which is threatening the water supply for millions of people in Latin America and crops eaten around the world. But gathering data is difficult: Thin air and high altitudes pose problems for researchers.

”It’s really hard to get into these locations and requires a lot of hiking and investment of time,Off the cuff, I was thinking it would be cool to send something up to do the work while we could hang out in the valley.”–Oliver Wigmore, a doctoral student in geography at Ohio State 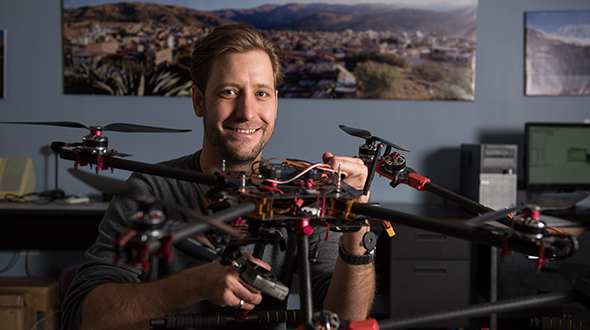 Wigmore needed an innovative solution. So he designed aerial drones specifically to collect data at elevations above 4,000 meters.

Before Wigmore's idea, UAVs were not widely used. Off-the-shelf models were expensive, and researchers in the field would lose precious time waiting for repairs when UAVs crashed.

Wigmore builds his own drones, tricking them out with high-speed motors and oversized propellers. He buys components on the cheap and builds them based on instructions he finds on the Internet.

Using the data, Wigmore and his colleagues create highly detailed maps of glaciers and wetlands in Peru.

The maps bridge the gap between high-level satellite views of the region and point measurements providing valuable knowledge for water resource planning for communities.

“UAVs offer some of the only technology available today for gathering data on a scale to inform local water management decisions,” he said.

Wigmore’s research has discovered dramatic changes in glaciers near Huaraz, including a 50-foot ice loss and collapse of the ice cliff. The maps also have uncovered a local groundwater system that is capturing and storing some of the meltwater in springs, where people will be able to access it even after the glaciers are gone.

“There will still be a significant drop in water supply eventually, but there may be some potential for the groundwater to buffer it,” Wigmore says.

The research is good news for billions of people living in China and India, who rely on Himalayan glaciers for water. Following Wigmore’s example, scientists there can use UAVs to plan water for conservation in the face of climate change. Food, drinking water and energy resources depend on it.

The pace at which glaciers melt in Peru could threaten the future of produce you pick up regularly at the grocery store.

Peru is the world’s No. 1 exporter of asparagus. (So if you’ve ever eaten that particular spiky vegetable, you’ve likely consumed water that was once frozen in a Peruvian glacier!)

Other exports include artichokes, avocados, grapes, blueberries and mangoes — all of which will become more rare when the Andean glaciers disappear, likely within a few decades.