You're a good Buckeye, Charlie Brown.

As Charlie Brown makes his latest play for the attention of the Little Red-Haired Girl in The Peanuts Movie, Ohio State has played an important role in getting the gang onto the Big Screen.

Director Steve Martino earned his bachelor’s and master’s degrees at Ohio State in the 1980s, studying the art and science of animation with the Computer Graphics Research Group, which later became the Advanced Computing Center for the Arts and Design (ACCAD).

He went on to gain renown in Hollywood working on some of the original computer animated shorts and feature films. Martino made his feature directorial debut with Horton Hears a Who! in 2008. 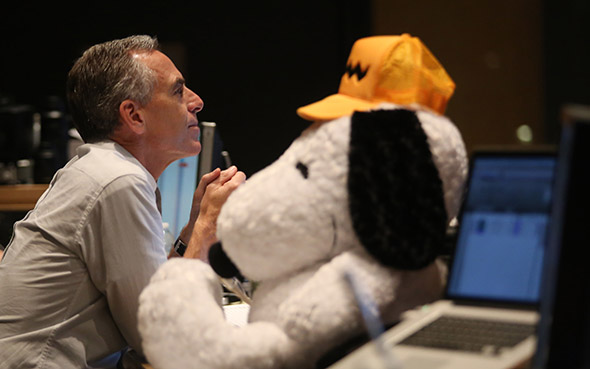 "I feel so lucky to have been at Ohio State at the time I was there, with this interest that I had," Martino says. "[Ohio State professor and computer animation pioneer] Charles Csuri had the foresight and initiative to put that program together, inclusive of artists and computer scientists — it was a completely new way to do animation."

"Had I been anywhere else I probably couldn’t have made this entire career path to right here, finishing The Peanuts Movie.
It was Ohio State that launched me into the work I do today."

Part of the success of Horton Hears a Who! came from Martino’s ability to stay true to the illustrations of Theodore Geisel (aka Dr. Seuss) — and that was a big reason the family of Charles Schulz came calling for a big-screen version of Peanuts.

Translating the familiar pen-and-ink two-dimensional look Peanuts fans have known and loved for more than 50 years to a full-color, computer-generated stereoscopic 3D format was complicated. Martino and his crew pored over thousands of the 18,000-plus comic strips Schulz drew — mostly at the Schulz Museum in Santa Rosa, California, but also at Ohio State’s Billy Ireland Cartoon Library and Museum.

"I was 7 when the Peanuts Christmas special was first on the air," Martino says. "It was the prime of my childhood and the homes in Charlie Brown’s neighborhood felt like the homes in my own neighborhood in Dayton. So I feel like I not only have a personal connection to all of the characters, I also have a personal obligation to do right by them.”

Ranked No. 1 in animation

With prominent alumni such as Martino and thanks to ACCAD, Ohio State has been ranked as the No. 1 program among the top 25 animation schools and colleges in the Midwest by Animation Career Review, an online source for aspiring animation, design and gaming professionals.

Ohio State alumni who studied at ACCAD have been making their mark on the American film industry for years, with graduates heading to prominent film studios such as Pixar Animation Studios, DreamWorks Animation, Blue Sky Studios, Walt Disney Feature Animation and Industrial Light and Magic.

It’s uncommon to see any animation project with a major release that has been produced without a Buckeye contributing — alumni who studied at ACCAD have served on the technical crews on most of the Oscar-winning animated features as well as numerous other feature films that, while not technically animated, relied on computer-generated imagery (CGI).

ACCAD conducts research centered on the use and integration of emerging arts technologies. It is a collaborative think space, a place to make, create, imagine and above all connect. It is distinguished by its trans-disciplinary approach to research and teaching and is recognized internationally as one of the leading centers of its kind.

Martino is clear that his Ohio State experience launched him into the work he’s doing today: "It’s fantastic to have, on one campus, a setting that includes exposure to so many people pursuing so many different studies. A lot of what I do now [involves] being able to talk to computer scientists and engineers as well as to artists and actors. The experience of being at Ohio State … percolates into who you are and what you do."

Martino has often made it a point to return to campus to spend time with students and offer feedback on their animation thesis projects. During a visit in 2012, after lecturing about what it had been like to direct Horton Hears a Who!, he also spent a significant chunk of time in the Billy Ireland Cartoon Library and Museum.

Charles Schulz drew a new Peanuts strip for each day of the year for almost 50 years, essentially creating more than 18,000 original pieces that were published and syndicated in newspapers throughout the world. 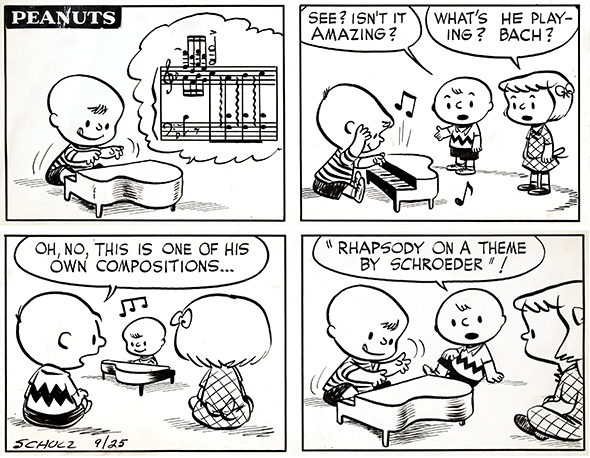 Most of those originals are housed at the Schulz Museum and Research Center in California, but there are a few dozen within the Billy Ireland collection, which also holds numerous pieces of other Schulz original art and illustrated correspondence as well as a few animation cells from the Peanuts television specials. It was a gift from Schulz’s widow, Jeannie, in fact, that helped jumpstart the library’s move from a basement near Mershon Auditorium to the grand new Sullivant Hall space — and has propelled the Billy Ireland library and museum into the largest and most comprehensive academic research facility documenting and displaying original and printed comic strips, editorial cartoons and cartoon art in the world. 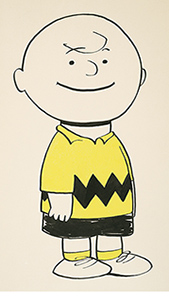 Jenny Robb, associate professor and curator of the Billy Ireland Cartoon Library & Museum, and an expert on cartoon art, said she was initially skeptical that a Peanuts movie could be done well, but that she became more optimistic when she heard it was Martino who would lead the way.

"It’s a risky venture because so many people will be paying close attention to how he stays true to the original but still can make the characters come alive,” Robb said. “But Charles Schulz was always interested in being able to translate Peanuts into all different types of media, so I think he would approve of the project. And seeing what Steve has done elsewhere, I don’t think they could have chosen anyone better to make it happen."

Nov. 6: Charlie Brown and the gang from Charles M. Schulz's classic will make their big-screen debut when The Peanuts Movie, directed by Ohio State alumnus Steve Martino (Horton Hears a Who!, Ice Age: Continental Drift) is released in theaters nationwide.

Nov. 19: A noontime panel discussion titled “From Strip to Screen: Staying true to the legacy of Charles Schulz in The Peanuts Movie,” will take place at the Barnett Center for Integrated Arts and Enterprise, Sullivant Hall, 1813 N. High St. Panelists include Steve Martino, director; Ralph Millero, vice president of 20th Century Fox Animation; and Craig Schulz, son of Peanuts creator Charles Schulz. Part of the Barnett Center Speaker Series; co-sponsored by the Arts Initiative. Free and open to all, but seating is limited and RSVP is requested.

Nov. 20: Martino introduces a free students-only screening of The Peanuts Movie. The event is co-sponsored by the College of Arts and Sciences, the Advanced Computing Center for the Arts and Design (ACCAD), the Billy Ireland Cartoon Library and Museum and the Wexner Center for the Arts — with a special thanks to 20th Century Fox and Blue Sky Studios.

You can support the Advanced Computing Center for the Arts and Design and the Billy Ireland Cartoon Library and Museum.