A culture of discovery 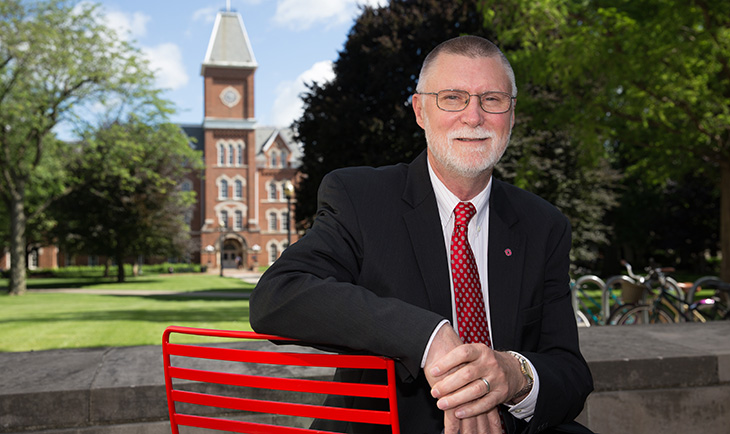 McPheron’s first degree launched an academic career that’s taken him from a postdoctoral research position at Louisiana State University, to faculty and academic leadership positions at Penn State University and finally back home to Ohio State, where he re-joined the university as dean of the College of Food, Agricultural and Environmental Sciences in 2012. McPheron was named the university’s interim executive vice president and provost last December; earlier this month, Ohio State President Michael V. Drake announced McPheron would keep his role permanently.

“Bruce is the special type of leader who inspires those around him to always bring their very best effort,” Drake said.

“Under his leadership as provost, we are confident that the university will continue to advance its national influence and impact in faculty research, cutting-edge teaching and learning initiatives, and exemplary community and civic engagement.”

Just after Ohio State announced his new role, McPheron shared his thoughts about the university’s role and his vision as provost.

What have you learned about Ohio State during your interim role?

Six months of the opportunity to serve as the interim executive vice president and provost was a chance to survey the landscape. A dean understands the complexity of the university, but you have a different perspective when you apply a different lens. You see the amazing complexity. This is a city of nearly 100,000 people, and all of the parts and pieces are necessary to make us what we are.

We have an extraordinary team of people who are committed to moving us forward. Our role first and foremost is to be a convener of conversations, to listen to the people around us and to think about what the emerging issues are, and then allow those conversations to happen in the academy.

I’m looking forward to having some of those very powerful conversations that put us at the forefront. I want Ohio State to be known as the place you have to check with when you’re deciding to do something new. We want our peers to say, “Before we start this, let’s benchmark with Ohio State and see what they’ve done.”

What should Ohio State seek to accomplish over the next few years?

The president’s 2020 Vision for Ohio State has set a very robust stage for the kinds of things we ought to be pursuing. The notion of access, affordability and excellence. The need to ensure that our excellence serves the community around us. And the mandate that we have to become a diversity leader and become an inclusive organization. I think these are all really great ground rules and provide a lot of pathways forward.

In the president’s 2020 Vision for Ohio State, that engagement pillar means that our research excellence and new creative accomplishments serve the public. Our faculty contribute to their disciplines and the growth of knowledge in their disciplines, but we also take it further than that and we actually solve some of society’s biggest problems.

In my own history coming through the food and agricultural world, we think about the transformative effect that cooperative extension has had on society. And as I spend more and more time in my new role with the health sciences colleges and infrastructure, there is no better definition of an engaged university than the kind of patient care we provide here. Actually taking today’s science into society and curing people, healing their injuries — that is an engaged university.

Ohio State has recently held summits on advising, teaching and learning and affordability. How do these — combined with high-quality co-curricular experiences — help the institution advance its academic mission?

These three summits actually are so tightly interconnected that I think we have to talk about them holistically. Affordability is tied to great learning, which is a function of terrific teaching, which is bolstered by world-class advising.

We can think about affordability from a variety of different ways. The simple way, of course, is just the cost of education. But it’s more complicated than that. How do you actually extract the maximum value out of your time as a student? It’s the classes we’re teaching. It’s the co-curricular things we’re doing.

The things that employers are asking for are never just the technical skills you learn through a major. They’re asking whether our students have had a chance to learn to lead, whether they can work in teams and communicate. Whether they understand the global context. They’re asking if we have an idea of the social responsibility of what they’ve learned. And so, really aspiring to include those elements in a full Buckeye education is one of our major tasks.

We grant one degree, and that is a degree from The Ohio State University. We have to be thinking about the special attributes that each of those locations holds. I think the regional campuses represent an absolutely essential front door to this university. The regional campuses are one of our commitments to access to students across Ohio to an Ohio State education. We need to ensure that those doors are welcoming and provide an absolutely excellent education.

Why is it important for Ohio State to adopt interdisciplinary approaches?

[Through the Discovery Themes program] we’ve made investments into eight different initiative areas and those are important because they’re focusing our energy and attention on our most grand challenges. But really, there’s another element I think we have to keep in mind. Over time, the real value is the impact on the culture of discovery at Ohio State. We are reinforcing the fact that we solve problems by connecting. Our departments have really gifted scholars who know their disciplines. But problems are largely solved when those disciplines collide, when ideas collide. And I think that one of the outcomes is that we will provide solutions that never would have occurred without an active culture of bringing people together.