Ohio State theater students and medical researchers are working together to find positive interventions for children with autism.

At first, the little girl sat on the edge of the group, showing little interest in the interactions before her. While other kids danced or played, she stayed still. She was reserved, quiet, antisocial.

Fast forward a few weeks, and that same girl was in the center of the stage, engaged in a game, giggling so hard she could barely say her lines. She shared her excitement with those around her, her eyes meeting theirs, her laughter infectious.

That progression might be expected in the average after-school program. But this small thespian was firmly on the autism scale, and that meant her behavioral changes bordered on revolutionary.

Proving this achievement can be duplicated has been the goal of Ohio State’s Department of Theatre and the Nisonger Center as they work to quantify the success of the Hunter Heartbeat Method, better known as Shakespeare and Autism. 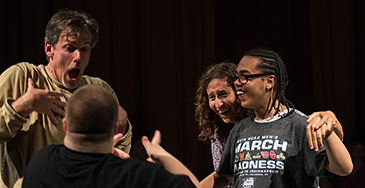 With children alongside them, Assistant Professor of Theatre Kevin McClatchy ’12 MFA and Robin Post ’06 MFA, first director of the university’s Shakespeare and Autism project, perform in The Tempest-in-Action.

Developed by Kelly Hunter, emeritus member of the Royal Shakespeare Company, the Hunter Heartbeat Method is a therapeutic intervention based around the rhythm of Shakespeare’s text, characters and storytelling. Hunter frequently uses The Tempest and A Midsummer Night’s Dream in her work, but she also has worked with Macbeth and Twelfth Night.

Children on the autism spectrum move through the plays with games that encourage them to make eye contact, take turns, imitate emotion, improvise, communicate and use humor, according to Maggie Mehling, a doctoral student in the Intellectual and Developmental Disabilities Psychology Program.

Hunter began working with children on the spectrum in 2002 and brought the Hunter Heartbeat Method to the Department of Theatre in 2011. (The department had begun partnering with the Royal Shakespeare Company two years earlier.) Her goal: to have her method studied and scientifically quantified through the university’s Nisonger Center, which creates programming for people with developmental disabilities.

A key component of the games is the “heartbeat hello,” said Robin Post, ’06 MFA, former director of the campus Shakespeare and Autism program. The current program director is Kevin McClatchy, an assistant professor of theater at Ohio State.

“The foundation of [Kelly’s] work is the rhythm of the heartbeat found in Shakespeare’s iambic pentameter,” Post said. “We tap it out on our hearts and say ‘hello,’ after which each person in the circle takes his or her turn to say hello while tapping out the rhythm. Following this, facial expressions are introduced — a happy hello, an angry hello.”

Two actors model a game, then two more repeat the game portraying the characters anew. The children see that different people play characters in different ways and that no one way is correct. Then the youngsters participate in the games, reciting lines and using body language to explore and communicate through their characters. Each hour-long session ends with a “heartbeat goodbye.”

A 10-week pilot evolved into a 42-week research study. The group included students from three schools and a learning center in the Columbus area.

“We collected data over one-and-a-half academic years,” Mehling explained. “The data from the first half of the study indicate children participating made significant gains in social and communication skills in some measures. We saw them improve in social skills when compared with other interventions they are receiving.” 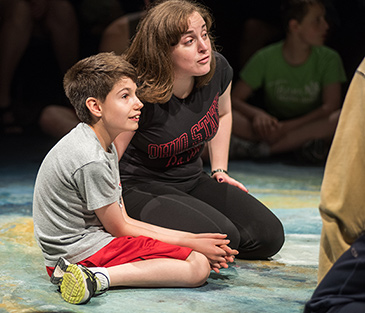 Post cited the example of one boy who was nonverbal when he joined, but started to speak some words as he grew familiar with the games.

“It was a total shock when things like that would happen,” she said. “We watched astonishing connections between child and actor, more eye contact and trust. [The children] discontinued self-injurious behavior over time. They enjoyed sitting and playing the games and came to enjoy one another. They became experts in making happy, surprised, angry and other facial expressions.”

Post said the rhythm of Shakespearean works makes them ideal for this type of interaction.

“The largess of Shakespeare’s storytelling makes for a wide range of communicative expression” that would not be possible with many other plays, she said. “There is huge expression available when portraying the characters of Midsummer or The Tempest. Expression is not subtle in Shakespeare’s plays. Additionally, the rhythm of the poetry seems to really resonate with children on the spectrum.”

Although the original research project is complete, Post followed it up with a Shakespeare and Autism service-learning course for undergraduate and professional students. The mission: to help them learn the approach and spread its outcomes farther.

Meanwhile, Mehling is expanding the research to see why this innovative approach is able to connect so well with children on the autism spectrum and offer hope and support to families.

“But no matter what we find,” she said, “it does not change its value.”

This story was originally published in the July/August 2015 edition of Ohio State Alumni magazine.

New study highlights the effectiveness of Shakespeare and autism 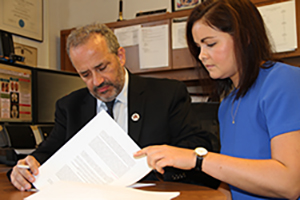 Breaking barriers with the Bard