Prince Albert II of Monaco came to Ohio State with a message for students: It’s up to you to embrace the alternative energy that he believes will steer the world away from global disaster.

“We are talking about a fundamental change in our habits and our mentalities,” the prince told the audience gathered at the Mershon Auditorium. “We are currently at the very beginning of this adventure and it will be up to your generation to lead it to its conclusion.”

The prince has a global reputation as an steward of the environment: In 2006, he created the Prince Albert II of Monaco Foundation, focused on environmental, climate and sustainability projects and research.

He lauded Ohio State’s "green" efforts during his remarks and a roundtable discussion with Ohio State President Michael V. Drake and Provost Bruce McPheron. During the discussion, the leaders touched on the varied ways Ohio State is addressing the societal challenge, from research to programs to ensuring student success in the realm.

The address at Mershon was toward the end of a whirlwind 24 hours for the prince, who visited the campus to learn about the breadth and progress of the university’s sustainability practices. Of particular interest: Ohio Stadium's award-winning Zero Waste program, which diverts more than 90 percent of game-day waste from landfills. Monaco is in the process of upgrading and expanding its Louis II Stadium, and Prince Albert sees Ohio Stadium's Zero Waste successes as an inspiration.

At the Shoe, Prince Albert met Tom Price, a 1964 graduate of Ohio State’s College of Food, Agricultural and Environmental Sciences. Price’s Organic Farms composts the food scraps left behind on game days, a haul that includes one ton of hot dogs and buns each game.

“That’s pretty impressive when a head-of-state, somebody on that big of a stage, takes an interest in these issues,” Price said. 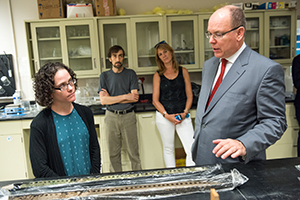 The visit also included stops at Ohio State’s Byrd Polar Climate Research Center and the Center for Automotive Research, where the Venturi Buckeye Bullet electric car was built. Venturi, an electric automobile manufacturer based in Monaco and a close environmental ally of the prince, sponsored the research that led to the car’s development and has continued to work side-by-side with students throughout the vehicle's design, build and testing.

A commitment to sustainability