Alum Douglas Brinkley, Class of 1982, is one of the most prominent historians in the United States — and CNN's presidential historian. “My experience at Ohio State could not have been better,” he said. “I just learned so much.” 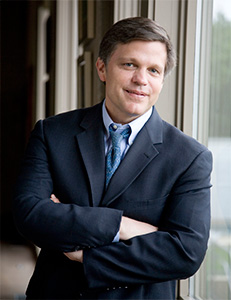 Douglas Brinkley always knew he wanted to be a historian, but his undergraduate years at Ohio State proved the prudency of his aspiration and helped shape the kind of historian he wanted to be.

It was a given that his purview would be American history, ever since family trips for the youngster growing up in “historic” Perrysburg, Ohio, often involved visits to area historical sites such as the U. S. Grant Birthplace and Rutherford B. Hayes House.

Brinkley, a Class of 1982 graduate with a bachelor's in history, returned to Columbus earlier this year for the Ohioana Book Festival, where he signed copies of his most recent book, Rightful Heritage: Franklin D. Roosevelt and the Land of America, about FDR’s conservation record.

Brinkley says his Ohio State experience opened his eyes to a wider world, ensuring his view of his country would have a global perspective.

To Brinkley, a big university meant a wide range of courses from which to choose.

“I was able to take classes in French history, U.S. labor history with Professor (Warren) Van Tine and U.S. military history. Having so many different options was a very exciting smorgasbord.”

Now an Ohio State professor emeritus, Van Tine often invited Brinkley and other students to his home for dinner. He launched Brinkley’s prolific writing career — more than a dozen books and numerous magazine and web articles — when he helped Brinkley publish a paper in a labor union journal. “That was the first time I got to see my byline,“ Brinkley said.

“The advantage of coming to Ohio State is course selection. You can hone in on areas of personal interest. What is your aptitude? What excites you?”

Brinkley credits Professor Gary Reichard, then chair of the Department of History, with teaching him to link the past with the present. “Gary Reichard connected history with current affairs brilliantly,” Brinkley said. (Reichard is now executive vice chancellor and chief academic officer of The California State University.)

Brinkley worked as a server at the Faculty Club, where he often waited on the coach, who once caught him reading Norman Mailer’s Armies of the Night, which questioned the U.S. involvement in the Vietnam War. “Woody didn’t much care for that book, but when I told him it was a class assignment, he said, ‘Well, then you have to read it.’"

Assigned books such as Mailer’s Armies of the Night and Stokley Carmichael’s Black Power stirred the budding historian’s interest in topical issues. “Eighteen- and 19-year-old guys coming to Ohio State in 1978 really read and talked about writers such as Jack Kerouac and Hunter Thompson. On the Road and Fear and Loathing in Las Vegas were just mandatory reading for guys like me. It was in the air — books about being young and braving the explorations of the American landscape. I try to honor that in my work.”

A national platform for his opinions

As CNN’s presidential historian, Brinkley composes essays for its website about topics such as the pop music classic American Pie, the suspension of NBC News anchor Brian Williams (for fabricating events in his past) and the Obama administration’s conservation record.

The subjects of his writing have ranged from Rosa Parks to Bob Dylan, from John Kerry to Ken Kesey, from Jimmy Carter to Hurricane Katrina. He edited the letters of gonzo journalist Hunter S. Thompson.

After graduating from Ohio State with a history degree, Brinkley went on to earn an MA and PhD from Georgetown University. A married father of three, Brinkley is a professor at Rice University and resident of Austin, Texas.

“I consider myself to be a 20th-century U.S. historian and I look at it from more of an American studies approach,” Brinkley said. “I look at the 1960s, the Kennedy legacy, Berlin and Cuba, Lyndon Johnson and the Great Society, but I also look at arts and culture — Dylan, folk music, the rise of the credit card culture and so forth. Otherwise, you don’t really understand the decade. Presidents and other office-holders don’t live in a bubble, but are part of a spasm of time.”

Foremost a biographer, Brinkley always is working on something. His next project might be a book about Dylan, the environmental movement of the ’60s or American space heroes Neil Armstrong and John Glenn. (Buckeye point of pride: Ohio State has both the John H. Glenn Archives and the John Glenn College of Public Affairs.)

Whatever the topic, Brinkley’s time at Ohio State will be present, at least between the lines.