The person you become

At Ohio State, sisters Ilhan and Nima Dahir found the challenges, communities and opportunities they needed to make an impact on the world.

Ilhan and Nima Dahir started on an educational journey as children that led them both to Ohio State.

The daughters of Somali immigrants, they held on to their cultural heritage while simultaneously encouraging and pushing each other toward academic achievement from an early age. As a kindergartener, Ilhan would spend the day learning to speak English and read and write. After the school bus dropped her off in the afternoons, she would share those lessons with Nima —who skipped ahead a grade as a result.

“Anything I achieve, she makes sure to tell me that it’s because of her,” Nima says with a laugh.

She is majoring in math and economics at Ohio State and will graduate this spring as the university’s fifth Beinecke Scholar. Nima then heads to New York City to work as a research analyst for the Federal Reserve Bank of New York. She plans to pursue a PhD after that, possibly delving deeper into the relatively new subfield of experimental economics.

Meanwhile, Ilhan, a 2015 graduate, is teaching English as a Fulbright student in Izmir, Turkey and preparing to study at the University of Oxford this fall as Ohio State’s sixth Rhodes Scholar. She will work toward master’s degrees in refugee and forced migration studies and global governance and diplomacy. Ilhan will explore theories and questions surrounding how and why people move across borders — from fleeing violence to escaping the effects of climate change — and what long-term solutions exist for preserving their human rights.

“I’m eager to use any sort of knowledge I gain to affect people’s lives in a positive way,” Ilhan says.

Serving others has been part of the Dahir sisters’ philosophy during their time as students at Ohio State, explains Dr. Javaune Adams-Gaston, vice president for Student Life. She came to know both women better through their leadership positions with the Muslim Students’ Association. 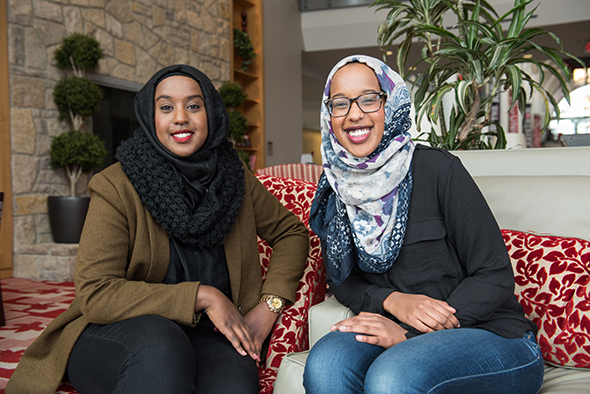 Ilhan and Nima Dahir feeling at home in the Ohio Union.

“Nima and Ilhan bring out the best in people,” Adams-Gaston says. “They’re so grounded. They’re so authentic. They care about the world around them and how they’re going to help that world. So often in leadership, people think, ‘What will I be known for?’ These are individuals who say, ‘What impact am I going to have on the world?’ The emphasis isn’t on the ‘I.’ It’s on the change.”

Having grown up in nearby Hilliard, Ohio, both women had reservations about attending a university so close to home. Would it offer them the opportunity to realize their potential and support their ambitious dreams?

“The decision to come here was one of the best I could have possibly made. Ohio State is exactly where I needed to be,” Ilhan says. “Four years is a very short amount of time, but I think you can push yourself to go deep here. There are so many small decisions I made and conversations that wouldn’t have been possible anywhere else.”

With an older sister and many friends already attending Ohio State, Nima gave serious consideration to the other prestigious universities recruiting her. In the end, she found herself comparing every grand hall to Thompson Library, every green space to the Oval and the camaraderie among students to the indelible Buckeye Spirit.

“I love sharing the experience of being a Buckeye with tens of thousands of students and hundreds of thousands of living alumni. It’s a large place, but you can find your own community here,” Nima says. “President Drake has been so welcoming and wonderful. The faculty that I get the opportunity to work with are world-class, and the things I experience at Ohio State can’t be found anywhere else.”