Kimberly Kirkwood-Boulter said there aren’t many things her son can control. Diagnosed with cerebral palsy, 3-year-old Aiden is limited with certain abilities such as his fine motor skills and his vision. He also can’t grasp very well, and has trouble operating typical toys made for children his age.

All that changed when Aiden got his hands on adapted toys, which are engineered to be operated by children with physical impairments. 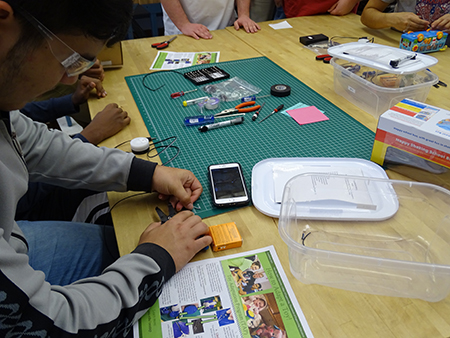 An Ohio State student tackles the intricate work of adapting a toy.

“If you have a switch that’s placed near them, it gives them the ability to control a toy, whereas they have little control otherwise,” Kirkwood-Boulter said. “It gives them control over something and it lets them interact with the world.”

Aiden was one of the area children who received some new adapted toys during a recent event called Toys for All Tots, at Nationwide Children’s Hospital. The event was hosted by members of Ohio State’s Toy Adaptation Program, which adapts toys and donates them for children with special needs.

The Toy Adaptation Program started three years ago in Ohio State’s College of Engineering and receives funding from the Office of Research and the Office of Outreach and Engagement.

Liz Riter, co-director of the program, said students work year-round to adapt the toys, meeting once a month for workshops where they open the toys and figure out how to adapt them.

The challenge for many children with physical impairments is that they can’t manipulate the small buttons or switches on a toy. Students in the program adjust them so that a new switch or button, often a bigger one, can be plugged in. The switches can be customized so that a child can activate them using his or her leg, chin or other body part.

Riter said the Toy Adaptation Program has been gaining in popularity with engineering students.

“I think we’re seeing a growing trend where they want to be able to use their skills and give back to the community or make a societal impact positively in some way.”

Rachel Kajfez, co-director of the program and an assistant professor in the Department of Engineering Education, said this year they’ve had about 800 students participate in the program in some capacity.

“I think sometimes the students get really bogged down with the technical content in their classes,” she said. “With this project we’ve been able to give a really great societal context and project with an impact, while weaving in that technical content.”

Victoria Kinzel is an Ohio State junior studying chemical engineering. She’s part of the Green Engineering Scholars program, which encourages students to become socially responsible and give back to their communities. Kinzel’s been involved with the Toy Adaptation Program since her freshman year and has attended about a dozen toy adaptation workshops.

“Playing with toys is so crucial for kids growing up and kids developing, and I think that’s sometimes overlooked,” she said. “You kind of see toys as a luxury, and sometimes they’re a necessity in teaching kids how to function.”

Emily Curtiss, a sophomore studying mechanical engineering, said her favorite part about the program is attending gatherings, like the recent Toys for All Tots event, and getting to meet some of the children who receive the adapted toys.

“You just see their faces light up, they’re so excited to get a toy,” she said. “It makes me feel great. I love it so much.” 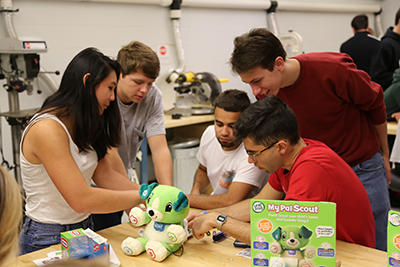 Students work together to adapt a toy dog.

“The toys are really a way for that child, like any other child, to participate and learn and gain those developmental skills,” said Mary Jo Wendling, an occupational therapist and manager of the library.

Wendling said the toy library is a critical service for area families with children who have special needs, because the parents often have many extra expenses and the cost of adapted toys are an additional financial strain. Wendling said an adapted toy can run anywhere from $50 to $100 or higher.

“To have their child be able to do something independent that is fun, with a toy, it’s a really thrilling experience,” she said.

Wendling says she relies on the Toy Adaptation Program for toy donations and praises the work of the students involved. “It’s really been a mutually beneficial project,” she said. “I don’t anticipate that these are all students who are going to go into rehab engineering and make toys that are switch-activated. That’s not it. I hope it makes them look at everything they do from a broader perspective.”

Support the toy and technology library