Alina Sharafutdinova, who graduated last fall from Ohio State, is a recipient of the President’s Prize. As an honoree, Sharafutdinova will have the opportunity to spend her first year after graduation helping address the opioid crisis. 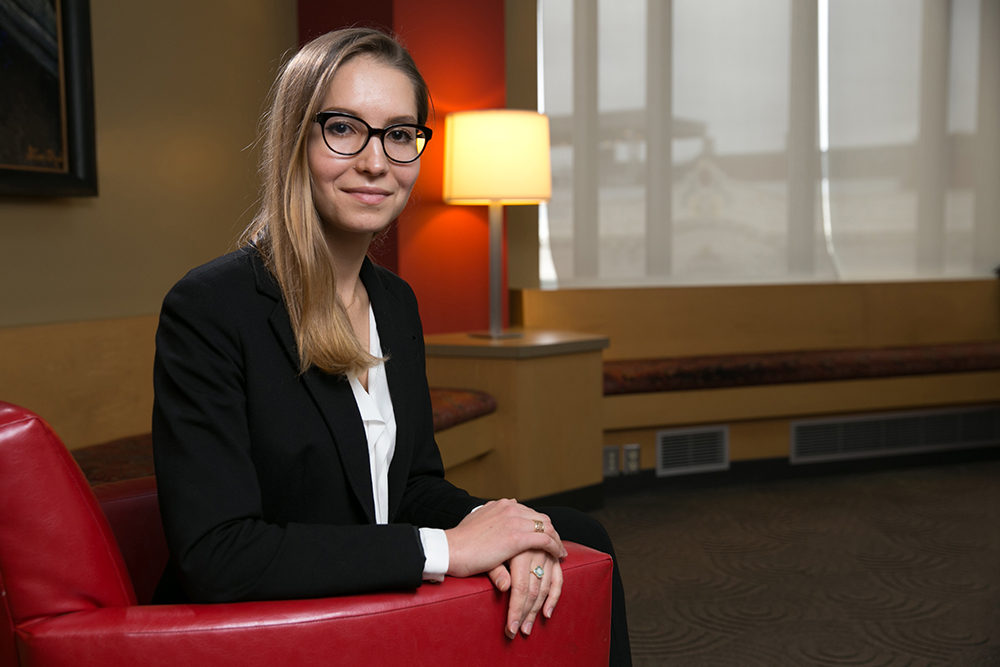 Alina Sharafutdinova has always had an empathetic awareness of her surrounding world.

As a child in Uzbekistan, she’d notice an abandoned building, trash on the street or a homeless person in need of a meal and wish she had a magic wand to make everything better.

“Since I was little, I had the desire to do something, to change something, to make a difference in a place I live,” Sharafutdinova said.

Sharafutdinova is aiming to do that as one of two graduating seniors receiving the 2018 President’s Prize, the highest recognition Ohio State bestows on exceptional students committed to making our world a better place. Ohio State senior Anna Voelker is the other honoree and will be working on a project developing new ways to increase access to science education for those with disabilities.

The 23-year-old Sharafutdinova, who moved from Uzbekistan to Dublin, Ohio, nearly seven years ago, was selected by Ohio State because of The Ohio Opioid Action Plan she proposed to combat the drug epidemic. She was met with immediate responses.

“I’ve received letters, messages and calls from people who have been affected by this problem,” Sharafutdinova said. “They just found out I’m going to implement this project. It’s so meaningful to them.”

Sharafutdinova’s project aims to help children at a high school and its surrounding community in one of the five Franklin County ZIP codes she identified as being high-risk communities for opiate overdose deaths.

“I have an interest in children and making a difference in their lives,” Sharafutdinova said. “They’re our future. They’re the most vulnerable group of people in our community that is indirectly affected by this epidemic.”

The President’s Prize calls for Sharafutdinova to receive a $50,000 living stipend and up to $50,000 in startup funding, which begins when she graduates in December with a bachelor’s degree in health sciences.

As a new Ohio State employee, Sharafutdinova will use the financial support of the President’s Prize to implement a two-tier program based on preventive education and treatment while involving community outreach.

“The plan is going to be very flexible,” Sharafutdinova said. “It’s not my intention to go into the community and tell them what to do. I really want to look in the community and the schools and find what they need, what their problem is, how we can address it, how can we work together to really engage everyone and mobilize everyone.”

Sharafutdinova began researching the opioid crisis when she learned about the issue of over-prescription of pain medication during an independent study in integrative medicine in spring 2017.

Already, opiates had touched Sharafutdinova’s family. Her uncle had died of an overdose, and years later she still sees how his son is adversely affected by that loss.

A President’s Prize project idea began to form in Sharafutdinova’s mind around the opiate problem that has led to a 642 percent increase in the rate of drug overdose deaths since 2015, according to the Ohio Department of Health.

The concept crystalized in February when an 11-year-old boy in Sharafutdinova’s neighborhood confided to her that his father had overdosed on heroin.

“There was a striking difference between his age and how a child is supposed to look,” Sharafutdinova said. “His eyes were very unfitting to him. I saw hopelessness and pain. That really spoke to me. That became very personal to me. I felt very compelled to do something about it.”

Sharafutdinova credits Ohio State, especially her faculty mentor Dr. Diane Habash of the College of Medicine, for helping her take a more global look at the opiate crisis while putting together her ideas for the project proposal.

Habash said it’s phenomenal how Sharafutdinova has been able to contextualize such a broad-based issue as the opiate epidemic on different levels.

“She brings an open view that’s incredible, and does so with great humility,” Habash said.

“She’s very bright. She just wants to help other people and truly invest herself in that process. She had to kind of figure out what that process was and is. This President’s Prize gives her opportunities to learn for herself and impact others in our world.”

Ohio State’s motto Education for Citizenship is reflected in how Sharafutdinova’s project intends to engage a diverse group of educators, law enforcement, local business partners and volunteers in an effort to build a positive community response.

Sharafutdinova knows her one-year plan is no magic wand for the opioid epidemic, yet a child’s idealism still remains rooted in a now pragmatic adult.

“The issue is intimidating,” Sharafutdinova said. “I don’t think this necessarily will solve everything. I understand it’s not possible to solve the entire opioid crisis yourself.

“But I’m every hopeful that we can create an environment for children, first of all, so they can succeed, really turn their lives around, and really believe in themselves and their future. They need to know that people care for them, that there are resources there, and that they’re not alone.”

Learn more about the President's Prize