Funding the future of autism research

Ohio State’s progress in autism awareness and research wouldn’t be possible without the generosity of donors. For one family in particular, it’s a cause that’s very personal.

The first time Marci Ingram uttered the word “autism” publicly, she was standing before a crowd of hundreds at the inaugural Autism Speaks Walk kickoff in Columbus in 2008. She took the podium as the walk’s chair. She was its chief champion, fundraiser and spokesperson. It was time to talk.

For more than a decade before Marci’s moment at the microphone, the word autism had hung heavy in the air — a constant, unspoken presence for her, her husband, Bill, and their son, Chris. 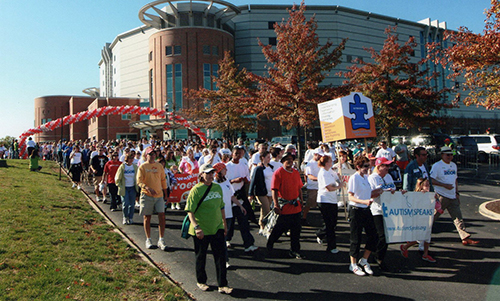 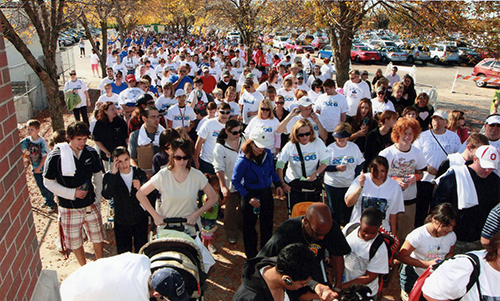 Hundreds of supporters take part in the first Autism Speaks Walk in Columbus to raise awareness for autism in 2008.

It was 11 years before that Autism Speaks Walk when Marci and Bill first heard the diagnosis of autism for 4-year-old Chris.

The Ingrams had older children, and they knew something wasn’t quite right. Chris didn’t respond in a typical way to people and toys and games. Eye contact was minimal; speech was delayed. The developmental milestones seemed not to apply.

In 1997, the diagnosis came, but it came with a caution. The doctor who diagnosed Chris advised Marci against telling anyone, fearing the label would do more harm than good at school, with family and friends.

When the Ingrams received that counsel from their physician, autism was straddling two very different medical realities.

On one side was the century just ending, when renowned researchers touted their “refrigerator mother” theory that cold, emotionally distant parents caused autism. It was not until the 1970s that the theory began giving way to scientific understanding of the disorder’s likely genetic origins.

Today, autism has emerged from the whispery shadows. The Centers for Disease Control and Prevention estimates one in 68 American children is on the autism spectrum. Increased awareness and improved diagnosis are partial explanations. Research continues into causes and treatments.

“We didn’t tell anyone about Chris’ diagnosis until he was probably 13 or 14,” says Marci. Family knew, and a few close friends.

But staying silent meant secrets. It meant the status quo. It meant suffering alone and struggling to find the resources, research and people who could help Chris and others like him.

Eventually, silence became too difficult, and when Marci and Bill began talking about their son, they discovered a world of other parents, caregivers, researchers, advocates and people needing help. “Once I started talking about it, I couldn’t stop,” says Marci. 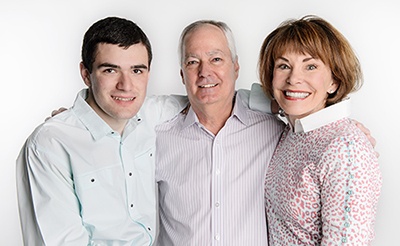 The Ingrams became an exceptionally formidable force — locally and nationally — in generating attention, advocacy and funding to unlock autism’s enduring mysteries. Funding for research was miniscule, and they were determined to get the best minds to work on the issue.

In 2011, they pledged $10 million to pool the vast medical and scientific talent at Ohio State and Nationwide Children’s Hospital and fast-track their autism research.

The Ingrams’ investment quickly began paying dividends with significant advances in human health — milestones upon which future discoveries will be built. One team of researchers from the two institutions uncovered the first evidence of a shared genomic link — genetic markers on chromosome 1 — between child prodigies and people with autism.

Another team created the first nearly complete model of an embryonic human brain — about the size of a pencil eraser — using adult skin cells. The model will accelerate research on autism, Alzheimer’s, Parkinson’s and other disorders by enabling scientists to test ideas and treatments in a safe and ethical manner.

The Ingrams’ focus evolves with their son’s needs. They always need to be anticipating things, explains Marci. “What’s the next step? What am I worried about for Chris?”

They are now staunch supporters of the Center for Autism Services and Transition (CAST) — part of The Ohio State University Wexner Medical Center — which provides integrated health care and services for teens and adults with autism at a single facility. Personalized visits pull from a range of expertise: specially trained doctors, social workers and pharmacists, as well as education and community partnership referrals.

The Ingrams’ vision is for CAST to become a national model for others to replicate. “They wouldn’t have to reinvent the wheel,” says Bill.

Chris, now in his early 20s, is set to move back to Columbus from Tucson, where he has been studying and working. This brings new issues to the fore. An apartment that is safe, a good job, preparations for the future.

The Ingrams want for Chris the same things all parents want for their children: a chance to use his talents, to test and prove himself against life’s challenges, to be happy, satisfied and loved.

“He’s going to be a good citizen and pay taxes and be proud of what he’s doing,” says Marci. “He has a lot of dreams.” 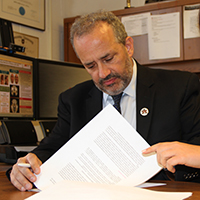 AUTISM AND OHIO STATE
Bringing the pieces together

Through its research, resources and creativity, Ohio State experts are leading the way in raising awareness about autism. This month we highlight the progress being made as part of national Autism Awareness Month. 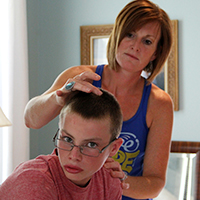 AUTISM AND RESEARCH
Piecing together the autism puzzle

Research plays a critical role in answering questions that still surround autism today. Faculty from multiple disciplines at Ohio State are teaming up to find those answers.