The benefits of owning a pet 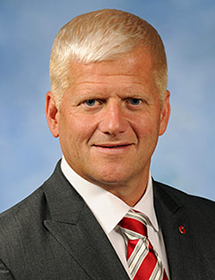 Rustin Moore, dean of the College of Veterinary Medicine, was the featured speaker at a recent Buckeye Smart event, a lunch-and-learn series hosted by the alumni association that features Ohio State experts speaking about various topics. Dr. Moore talked about emerging research that demonstrates the powerful bond between pets and their owners.

Why are pets so powerful?

Pets are so powerful for people for many reasons. They’re oftentimes the most stable part of the family structure. It’s known that around 70 percent of people in the United States have a pet. Kids are more likely to live with a pet than they are with their biological father or siblings. So for those populations, which I think of many of them as vulnerable, it’s the most reliable, loyal thing in their life.

What other populations benefit from pets?

It’s the same thing for homeless people, as well as the homebound. We serve those populations of people with an outreach medicine program in partnership with two groups, Lifecare Alliance and Faithful Forgotten Best Friends. We serve people who wouldn’t have the veterinary care for their pets otherwise. You can just tell when you’re interacting with them how important that pet is to them. It’s literally like their child. When I was out visiting a homeless camp last February, I asked two different people, “Why don’t you just give up your pet so you can actually get into a shelter or housing?” And they both said, “I can’t give them up, they’re the most important thing in my life. It’d be like me giving up a child.” Those are the reasons pets are powerful emotionally.

What does the latest research show?

There’s also a lot of evidence that’s emerging of how beneficial pets are to your health — physically, mentally, emotionally, socially. There’s starting to be more emerging research that’s actually showing those effects on people like veterans with PTSD, Alzheimer’s patients and others. Part of the evidence that’s out there that’s emerged is that pets actually have physiological changes on people. Your blood pressure goes down. Your blood cortisol, which is a stress hormone, goes down. Another hormone called oxytocin, which is a feel good hormone, goes up. So pets really do have positive benefits on people and can decrease stress. That’s especially important in today’s world where we have stress all around us. “Zooeyia” is actually a term that’s been recently coined for the research evidence that shows the positive health benefits of interacting with an animal.

Power of a pet podcast