A boost to his career climb 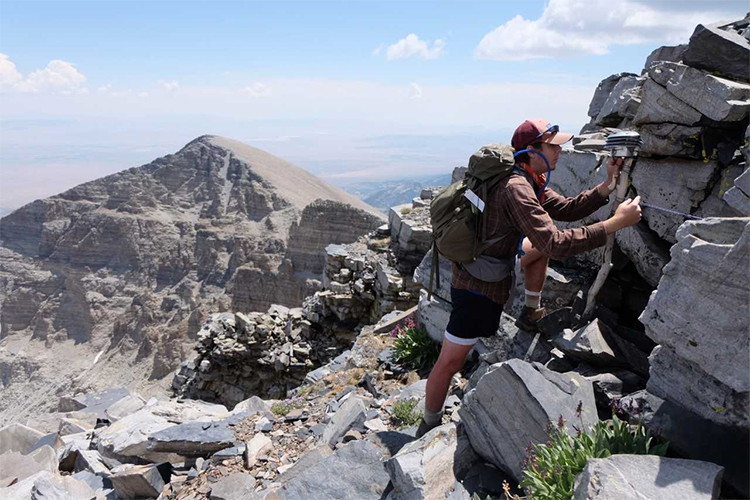 John-Morgan Manos' research experience at the Byrd Polar and Climate Research Center took him further than he ever imagined.

During his time at the Byrd Center, Manos designed and led his own research projects at Byrd, and has presented his research at the Denman Undergraduate Research Forum as well as at the American Association of Geographers annual meeting in New Orleans. Manos recently shared how his student experience working at a world-renowned climate center helped prepare him for the future.

How did you get involved with research at Byrd?

I met Bryan Mark (a climate change researcher and professor at Ohio State and a state climatologist for Ohio) when I took his climate change class sophomore year. I really loved his class, and I went up to him after class one day and just said, “I really like your research. Can I work with you?” It really was as simple as that. He suggested that I come to their research group’s meeting that week, so I did, and it just kind of blossomed from there.

Has your position at Byrd shaped your career aspirations?

One big thing I’ve learned is I really like being outside, out in the field collecting the data. Since I’ve been involved in the whole process, it’s really helped me grow in that sense and taught me what kinds of fields I’m interested in working in for the future. I definitely want to work with climate science, and I don’t know if I would have known that for sure coming out of undergrad if I hadn’t gotten this opportunity to be involved with this research.

What is the best experience you’ve had while working at Byrd?

Though doing this research itself has been an amazing experience, the best memories that I’ve made working at Byrd aren’t all directly related to the research. Just being out there in the field in beautiful places like Great Basin National Park and getting to know the full-time researchers like Dr. Mark on a more personal level has probably been the best part. You really can become friends with your professors and get to know them on a more personal level, and those can even be lifelong friendships.

Everyone at Byrd is really passionate about climate-change research. It isn’t just a job to them. Some of the work we did required a four-mile trek with a 3,000-foot elevation gain. It’s a pretty difficult hike, and if you’re not passionate about your research, most people aren’t going to be willing to climb 3,000 feet just to collect data from one (measuring station) out of 40. We spent an entire day hiking up this mountain just to plant this one piece of equipment. But to us, for the cause, it’s more than worth it.