A fresh opportunity at Apple 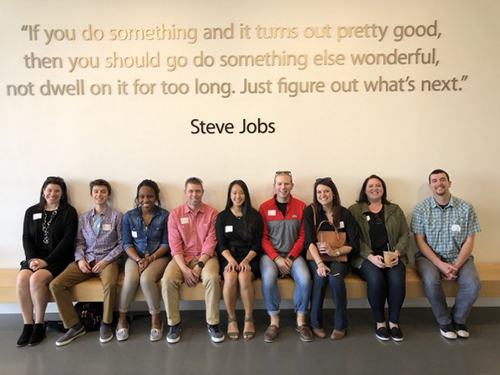 Earlier this year, four Ohio State students traded in winter’s cold for California’s sunshine — on a mission to design a better experience for new Buckeyes.

The students traveled to Apple’s Enterprise Design Lab in Cupertino, California to assist developers in the creation of an Ohio State app to help incoming students navigate their first-year of college.

This trip was the first of its kind: Ohio State is the only institution of higher education in the United States that has sent students to engage with Apple’s Enterprise Design Lab, according to Cory Tressler, director of learning programs.

The opportunity was made possible by Digital Flagship, a university initiative to promote student learning and engagement through the use of technology, which also is providing iPads to first-year students in the summer and fall of 2018.

When students arrived in California in January, they had three days to work alongside Apple developers and designers in the initial design process of the app. They offered crucial perspectives as students.

Brielle Davidson, a fourth-year studying biology and pre-med, joined three other students on the trip. Her expertise as a resident advisor helped in the creation of the app.

“I offer a lot of different experiences from my RA job,” Davidson said. “I primarily work with first-year students. So I have that day-to-day insight on what freshman might need that would help them be successful and what they should look out for.”

Davidson said the student team not only offered its suggestions but critiques on ideas. That feedback helped shape the app in a way students felt would be advantageous to incoming students.

“(The Apple developers) were intrigued and really devoted to understanding what college life is like at Ohio State, which I think is unique because we do a lot of things differently than other institutions,” Davidson said. “They were definitely willing to pick our brains.”

On the third day, the students were shown a mock-up of what the app could look like based off the insight and feedback they gave.

The next steps were to bring the plan made in Cupertino back to Columbus, where Ohio State app developers turned it into a reality in the months that followed.

“Within 72 hours you’re seeing (your ideas) … on-screen, like one-day I can tap on this and it will do exactly what you’re saying it’s going to do,” Davidson said.

Andrew Jackson, former student body president who graduated in May with a bachelor’s in political science, was impressed with how efficiently work was completed and learned from how the different groups came together to create the plan.

The Digital Flagship initiative —launched in October 2017 — has begun exploring future possibilities in which it can engage students and different sections of the university, according to Tressler.

“This won’t be the only time we do this. This is an ongoing partnership,” Tressler said. “How do we solicit ideas from the Ohio State community and have them be a part of this process?”