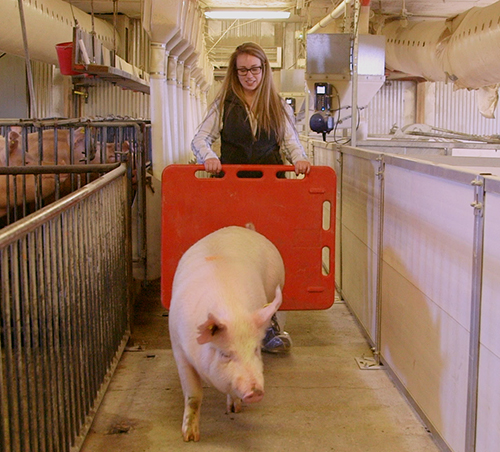 From the time she was a little girl, Nicole Lorig has always been passionate about two very different things – music and animals. So when the aspiring veterinarian came to Ohio State to study animal sciences, it made sense to add a minor in music to her studies. She decided to take it a step further, but she was nervous about approaching her advisor with an idea to somehow combine her interest in music and animals into one research project.

“I anticipated that she would tell me that it’s silly,” Lorig recalls. “But she was on board and wanted to help me find a way to combine the two.”

Her advisor, Kelly George, an assistant professor in Ohio State’s Department of Animal Sciences, worked with Lorig to develop a project related to new state requirements for pregnant pigs. By 2025, all pregnant pigs in Ohio will have to be kept in group housing. Animal advocates believe it’s better for the long-term health of the sows. But the issue is that when the pigs are initially put into group settings, they often engage in aggressive behavior that puts both the health of the sow and her unborn piglet at risk.

Inspired by Lorig’s passions, George helped her come up with an idea to play classical music for the sows, which they hoped would calm the animals, leading to less aggressive behaviors.

Lorig spent time at Ohio State’s Swine Center, a learning facility which houses 100 female pigs. For her research, Lorig played Mozart’s Divertimento No. 7 for one group of pigs before the animals were moved into group housing. Then she compared the group that heard music versus another group of pigs that didn’t hear the music.

“If you’re looking at total aggression, there were fewer instances of aggression between the music group versus the non-music group,” Lorig said of her promising results, which she thinks could be the first step in helping farmers limit aggressive behavior in their pigs.

“We’re trying to give more opportunities for students to explore these ideas and to try to improve human and animal health and well-being along the way,” George said. “We always encourage our students to follow their passions, and then let’s think about how we connect those passions too.”