Alumna Katie Smith's Hall of Fame career remains grounded in what she learned at Ohio State. 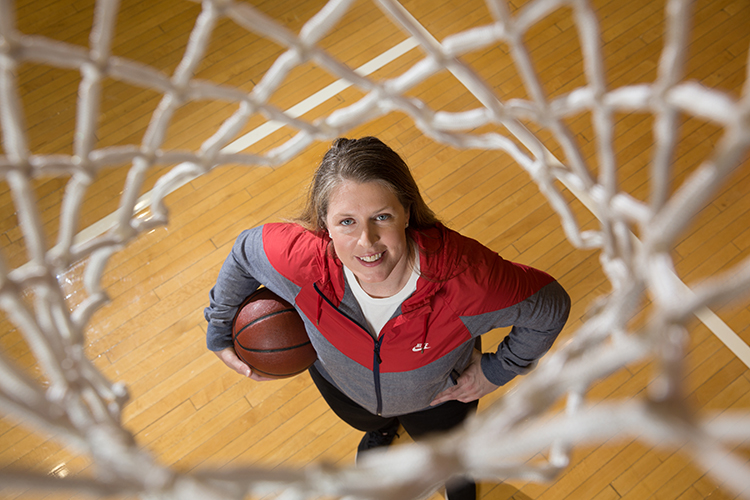 Katie Smith’s passport has stamps from around the world, serving as a blur of skylines due to a Hall of Fame basketball career that first bloomed a quarter century ago at Ohio State.

Smith is embarking on a new challenge as first-year head coach of the WNBA’s New York Liberty, but like all of her past travels, the new path will be cloaked in security by retaining Ohio State as a home base.

“I’ve traveled overseas and all over the country, but every time I come back here it feels like this is home,” Smith said on a recent campus visit. “It’s fun to go other places, but I really, really, really enjoy coming back, just relaxing, and kind of getting reconnected and grounded again with everybody you have here and all your history.”

Smith grew up in tiny Logan, Ohio, but discovered while playing at Ohio State from 1992 through ’96 that the university could feel comfortable despite the campus dwarfing her hometown population of 7,000.

“Ohio State is everything you could want it to be,” Smith said. “Whatever you want out of this experience, you can have. You can have a small, intimate, real quiet experience for your four years. If you want every opportunity to try anything and really branch out and meet people from all over, then you can have that. It really is what you make it.”

Smith’08, ’14 MS made Ohio State feel tight by forging close relationships with coaches, teammates, fellow students, professors and others throughout campus and the surrounding Columbus community.

Many of those people remained important friends and advisors to Smith, 43, as she won three Olympic gold medals and four league championships while playing 17 professional seasons – the final 15 in the WNBA – until 2013. In February, she was named to the Women’s Basketball Hall of Fame and dubbed a finalist for the Naismith Memorial Basketball Hall of Fame.

“I would encourage students to try different things, stay connected, make a network of people, and keep them warm,” Smith said. “You got to stay connected with the people who have been part of your life so that when you do have questions, or you want to run things by people, you’ll have those people. And you’ll definitely have them from Ohio State.”

Smith, an assistant coach with the Liberty the previous four years, has stayed connected with her alma mater in part by maintaining an offseason home in Upper Arlington, a short drive from Ohio State. She’s remained close to the women’s basketball program and made herself available to all Buckeyes seeking career, life and basketball advice. 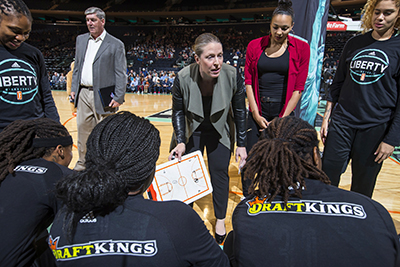 “I always love seeing her in our gym,” said Ohio State women’s basketball coach Kevin McGuff. “She pops in, watches us practice, hangs out. She’s got plenty of things that keep her busy, but I think she truly loves this university. Katie is a great ambassador for the university and certainly for our program. She’s one of the all-time great players in the history of our game, and for her to still be connected and around Ohio State is awesome.”

Smith will be in the stands at Nationwide Arena when Ohio State and Columbus serve as host of the NCAA Women’s Final Four from March 30 to April 1. The event will rekindle memories of her leading the Buckeyes to the NCAA championship game in 1993, where they lost to Texas Tech by two points despite the freshman scoring 28.

“I’m so pumped,” Smith said. “I’m excited for our city and for those in the women’s basketball community to host these ladies because it’s a once-in-a-lifetime experience for a lot of them. It’s going to be something they’ll remember forever. For us to be able to welcome them and put on a show, support them and make them feel special, it makes my heart feel good.”

So does Ohio State, a special place that served as a launching pad for Katie Smith to surpass her own childhood dreams – and a university that still plays a formative role in her daily life as a new chapter unfolds as a new WNBA head coach.

“I love my days at Ohio State,” Smith said. “When you’re here (as a student) you don’t quite comprehend everything Ohio State has to offer – just how large this network is, and the alumni base and resources that you have. If you build solid relationships when you’re here, then you can have them to go back to when you leave to do whatever you do after your college days. Ohio State really gave me the foundation to do what I’m doing now.”

Learn more about the Women's Final Four in Columbus