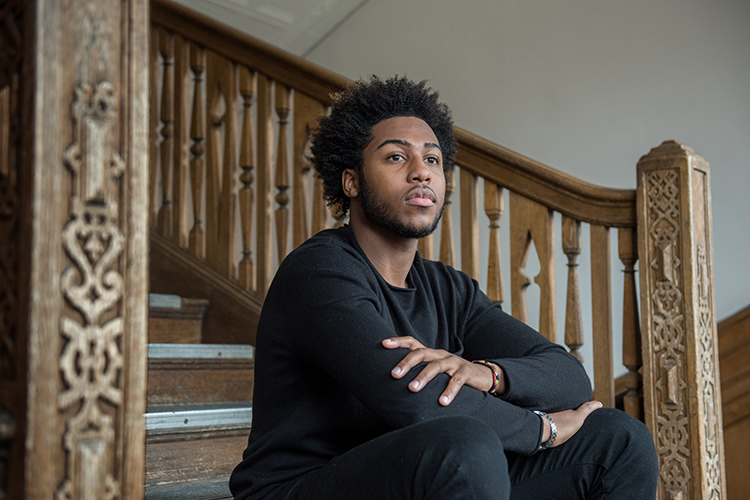 As they sat in the juvenile correctional facility, Donovan Hampton — who had come as part of a mentorship program — took note of one youth in particular. It was his personality. He was funny, talkative, rambunctious. Maybe even a little too rambunctious at times. It reminded Hampton of a younger version of himself.

“I thought I was staring into a time capsule when we first met,” the Ohio State student recalled.

It took time, but Hampton developed a deep connection with the youth by lending a sympathetic ear. “He oftentimes had some very profound, developed thoughts,” Hampton remembered. “He just wanted to be heard.”

The experience made Hampton reflect on his own life, one that had been, at times, filled with uncertainty. It made him reflect on the deep connections he’d made at Ohio State, especially through the Bell National Resource Center.

"These connections opened up new paths for me to explore as a queer, young black man," he said. And now, as a mentor in Ohio State’s Buckeye R.E.A.C.H. Fellowship program, he was helping others explore new paths.

“Friends, faculty and mentors showed me light even in my darkest times,” Hampton recalled. “Now [through Buckeye R.E.A.C.H. Fellowship], I enjoy seeing the guys every time we go into the facility. Empathizing and sympathizing with young men who have been long forgotten by society is one of the most humbling and soul-filling experiences anyone can encounter.”

A home at Ohio State

From the time he was young, Hampton’s parents sacrificed to ensure their son had a better upbringing than they did. At their home in the Cleveland suburb of Euclid, Hampton’s parents made sure he kept busy, whether it was providing him lots of books to read or encouraging him to get into sports.

“They instilled me with values, kept a community around me and showed me how someone can have a positive impact on society,” said Hampton, who would carry those values with him as he grew older.

When he came to Ohio State as a freshman in 2016, Hampton wasn’t sure yet about his life plans. But he quickly found home in the Todd Anthony Bell National Resource Center on the African American Male, opened by the Office of Diversity and Inclusion in 2005 as a way to increase graduation rates among black men and provide them with leadership and networking opportunities.

“We connect them with resources. We get them around a community of other like-minded individuals,” said Robert Bennett III, the center’s special assistant to the executive director.

The center recruited Hampton to visit Columbus before his freshman year – part of an early arrival program to get students acclimated to campus before starting classes. Bennett also taught Hampton in a class about African Americans in sports, and immediately took notice of Hampton’s maturity and thoughtfulness.

“He’s able to push others and their thinking on particular issues because of his insights into life.” 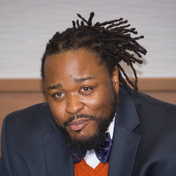 Hampton also took part in the BNRC’s annual black male leadership retreat, where he made connections that landed him an internship at John Jay College’s Urban Male Initiative in Manhattan.

“BNRC is a brotherhood for me,” Hampton said. “I’ve formed so many connections and made so many friends. Just being in that program has really kept me on the straight and narrow.”

It’s also influenced his course of study, motivating him to dual-major in sociology and African American and African Studies. The goal is to understand history forged by black communities and then apply those learnings to the current plights of black people across the globe.

Outside the classroom, Hampton explores some of these deep issues through his creative work as part of Never Let Your Pen Dry. This student-led project is a spoken word, poetry and creative writing organization on campus that hosts workshops, open mics as well as locally and nationally-renowed poets to perform and collaborate with the Columbus community. Hampton's inspiration is influenced by the books he reads, the experiences he’s faced and the people in his life.

“Consistent themes among my pieces include conversations of the wide breadth of blackness, love, queerness, faith and historical figures,” he said. “I love being around other creatives who inspire and affirm my work.”

Reaching beyond the walls

Hampton admits he was a little naïve the first time he stepped foot in the Circleville Juvenile Correctional Facility.

“I had this idea that I was going to go in there and be the solution to whatever landed the guys in there,” he remembered.

This motivation to help other young men inspired Hampton to get involved with Buckeye R.E.A.C.H., which stands for Relationships and Education in Action through Community and Hope. The program began in 2012, a product of the late Patricia Cunningham, the former director of Student Life's Department of Social Change at Ohio State. Every other Saturday, a group of Ohio State students act as mentors for the youth. They often set up shop in the correctional facility's library or gym, where the students engage with the youth about complex topics like social movements, community organizing, life skills, emotional wellness and literacy. The idea is to encourage the young men in their growth as individuals and channel their energy into creating change in their own communities.

“It’s important these young men know the community is behind them – to have someone say ‘I see you as a human being and I’m here to empower and encourage you’,” said Ashley Pryor, director of Social Change. “The connections are very deep and lasting on both sides.”

But as Hampton soon found out, developing those connections takes time, since the youths’ emotional barriers are often as strong as the physical barriers that surround the correctional facility.

“Incarcerated people are often seen as these throwaways,” Hampton said. “It took weeks to gain trust and respect from them simply because they had been so disrespected and unseen for most of their lives.”

But Hampton and other student mentors know it just takes a little guidance, some encouragement and a helpful hand to start breaking those barriers. That’s exactly how he’s found his own path in life – by tapping into Ohio State’s networks, making deep connections and not being afraid to lean on others.

“The connections I’ve made, the places I’ve traveled and the people I’ve met are all due to being here at Ohio State,” he said. “It’s the steppingstone on the path to my best self.”