BuckeyeThon brings out the best 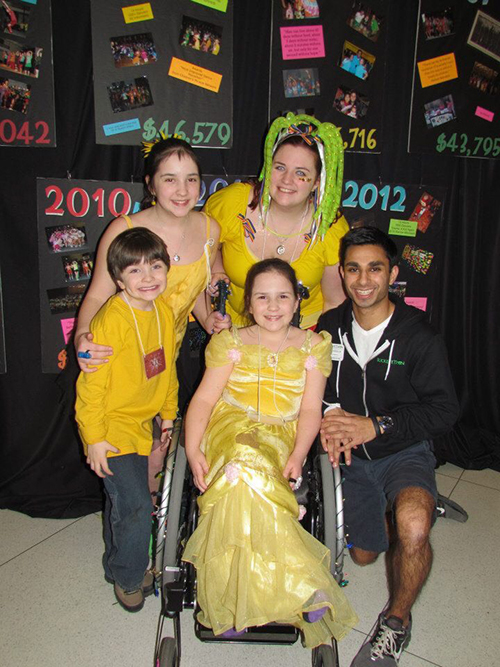 All told, BuckeyeThon is probably the best dance party you’ll ever go to.

Every year since 2002, Ohio State hosts this huge dance marathon, actually the largest in the country. There’s dancing, music, entertainment, games, activities, delicious food — and a whole lot of love and learning.

This annual party isn’t just about getting your groove on. It’s about raising money to help children who have fought, or are currently fighting pediatric illnesses at Nationwide Children’s Hospital.

Ohio State is home to over 1,300 student organizations that help connect students to their community. Since its inception, BuckeyeThon has raised more than $6.5 million in total. That a lot of dollars for dancing the night away.

And in addition to the huge amount of donations this event has raised, it also teaches some pretty impactful life lessons. BuckeyeThon alumni talk of being shaped by their involvement in the largest student-run philanthropic group at Ohio State.

It provides leadership opportunities and imbues students with the lessons of philanthropy and paying forward—a spirit derived from the group’s mission to raise awareness and funds to benefit children with cancer.

From the founder to recent participants, here are three poignant life lessons that were learned on the dance floor.

Lead with a purpose

Rosa Ailabouni '01, the founder of BuckeyeThon, had a dream at Ohio State: bring students, faculty and staff together for one big goal.

That dream became reality in 2002 with the first BuckeyeThon dance marathon, and her two-plus years working with others on that common cause established core beliefs that will serve her as a businesswoman for years to come.

“BuckeyeThon taught me to lead with a purpose, to think about the impact a decision makes on people’s lives or on a project,” said Ailabouni, now a senior business consultant for Navigator Management Partners.

Combine your heart and mind

Suraj Hinduja ’14 calls his tenure as BuckeyeThon president the two best years of his life, and that experience at Ohio State still shapes his daily outlook. He’s even chair of the philanthropy’s alumni board.

“BuckeyeThon allowed me to take my mind and my heart and combine those forces into one and actually go do something with it,” Hinduja said. “That was one of the greatest gifts the university and BuckeyeThon ever could have given me.”

Find the tenacity to never give up

“I fell in love with the cause so much that I can’t imagine not spending every day of my life fighting pediatric cancer,” said Willis.

Willis is now in medical school, and her busy days are fueled by memories of BuckeyeThon.

“Getting to spend time with the kids and parents taught me a lot about never giving up and being super tenacious, because the kids have gone through a lot. They follow their dreams despite barriers in their way,” Willis said. “That has guided me in what kind of doctor I want to be.”

Read more about BuckeyeThon in the winter edition of Ohio State Alumni Magazine.