First-year student Laura Tavera is making a difference for her hurricane-damaged nation — right here in Columbus. 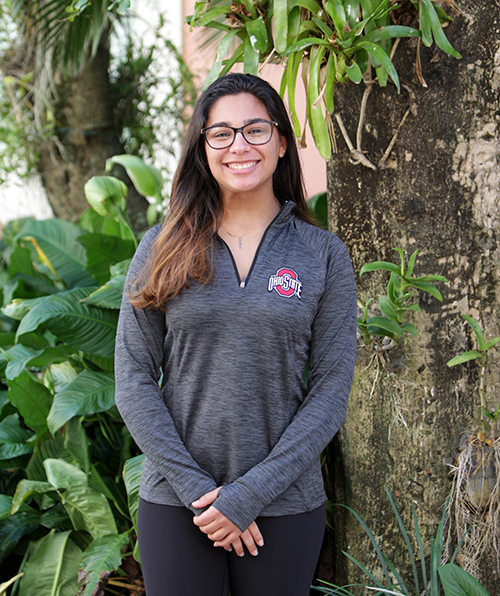 Laura Tavera didn’t have a window seat. So as the ocean below gave way to land, to the familiar curves and beaches of the island she has called home for 19 years, she didn’t see the blue tarps covering shells of homes.

It wasn’t until she was on the ground, driving past road signs heaped on the shoulder and covered basketball courts crushed by trees, that Tavera saw how Puerto Rico has changed.

Tavera was a month into her first year as an animal sciences major at Ohio State when Hurricane Maria struck Puerto Rico last September. She watched, horrified, as images of the devastation began to emerge. Her family wasn’t answering her calls.

“I would try to pick up a book and try to study to get my mind off of it, but when something that big is happening back home, you can’t really do much,” she said.

Her professors understood. They told her she could retake the midterms that were scheduled that week. Still, Tavera tried to distract herself. She was in her chemistry recitation when an unfamiliar number appeared on her phone.

“I hear my mom’s voice, and I start sobbing, and my mom starts crying,” Tavera said.

In the moment, she wanted nothing more than to run to that voice, to go home to Puerto Rico, to be with her family. But she realized she’d be more useful at Ohio State, where she could tap into a vast network of resources to send help home.

She ultimately connected with the university’s Puerto Rican Student Association, which held an eight-hour fundraiser on October 2 in the Ohio Union.

Because it was so soon after the hurricane, PRSA didn’t have time to drum up a lot of publicity for their event, but President Michael V. Drake tweeted about it and local news organizations showed up to cover it. When it was over, they had raised $2,500 and packed a semitrailer with donated items like water, diapers and food, said PRSA President Liane Davila-Martin.

“In less than a week, we were able to plan all of this, and the support on campus, the support from the university, has been tremendous,” Davila-Martin told student newspaper The Lantern.

PRSA has another fundraiser planned from 9 a.m. to 6 p.m. February 21. “Love for Puerto Rico” will be held in the Multicultural Center as part of this year's OSUnidos Week, and all proceeds will go to the Hispanic Federation’s UNIDOS Disaster Relief and Recovery Program for Puerto Rico.

Puerto Rico is still a long way from recovery. The death toll remains unknown. Hundreds of thousands of residents still don’t have power, and the island still experiences regular blackouts.

When Tavera was home over the winter, she saw an island frustrated and frozen, struggling to regain its footing. Debris has been swept to the side of the road and left there. Damaged signs and missing signals deadlock traffic. When the sun sets, entire neighborhoods are swallowed by the dark.

But she also saw some meaningful signs of hope.

The storm had destroyed all of the coffee trees at her grandmother’s small farm, which was particularly upsetting because the farm had been her grandfather’s passion, and he was no longer around to rebuild it. Her grandmother had never had much success getting the trees to grow from seed.

But for some reason, when Tavera’s grandmother put a few beans in a pot this time, the plants flowered. They grew like it was their mission.

Today, she has over 60 coffee trees in her backyard.

Learn more about the College of Food, Agricultural, and Environmental Sciences