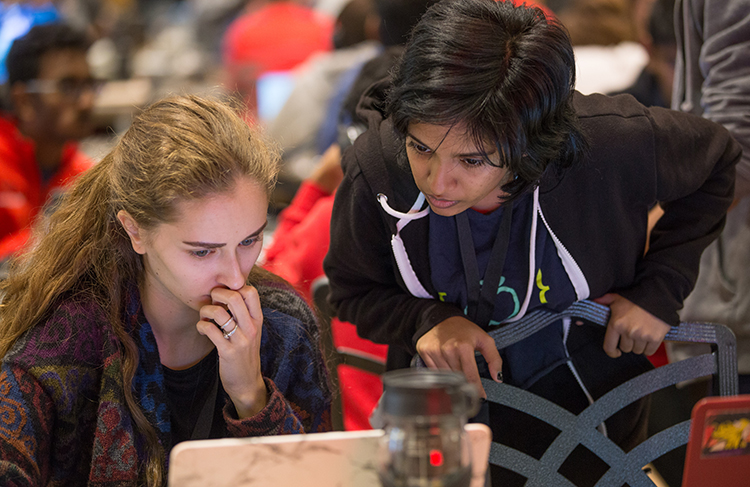 A year ago, Anjali Kapoor was a first-year student searching for a comfort zone in the male-dominated field of computer science when she showed up alone at MakeOHI/O, a hardware-oriented hackathon at Ohio State.

There were about 150 students at MakeOHI/O, an intimidating beehive of wire strippers, soldering irons and an assorted equipment such as oscilloscopes.

Undeterred, Kapoor signed up and joined a team with three males. To her surprise, they encouraged her to be the main coder on their project, an automated greenhouse.

“I was having my ideas and my voice heard,” Kapoor said.

Kapoor’s eyes were opened, too. The Mason, Ohio, native noticed other women at the event, some participating as groups of four.

“It was something that was exciting,” Kapoor said. “I saw that my friends – women in computer science – can form teams and build products together. There’s not a lot of spaces for women to work together.”

Like HackOHI/O, a larger software-oriented hackathon held on campus, the third MakeOHI/O held in March was a spin-off from OHI/O, a student-led program founded in 2013 to foster the university’s tech culture.

“For me, OHI/O was an important reason why I stayed in my major and why I stayed in tech,” said Winnie Li, a Microsoft product manager and 2017 Ohio State graduate in CSE. 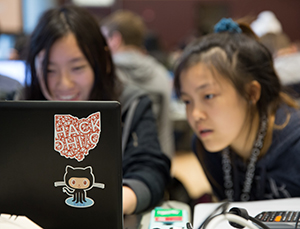 A pair of female students work on their project at the HackOhi/o on Ohio State's campus last fall.

Keeping female students in STEM – a nation-wide challenge for colleges and the workforce -- through events such as OH/O events is one of several ways the university is trying to diversity the field of electrical and computer engineering.

It’s also why all who are interested in the topic are invited to attend the second annual Meeting Diversity in STEM at Ohio State on Thursday at the MLK Room in Hale Hall from 2-4 p.m. Attendees will learn about university initiatives that are in place, as well as discuss ways to interact and network more effectively on campus to make programs more diverse.

The National Science Foundation found that in 1985, more than 35 percent of computer science majors in the U.S. were women. That number is now 17.9 percent.

Bettina Bair, an Ohio State senior lecturer in computer science and engineering, said recruitment and retention of women are the main challenges to stemming the drop-off, and both are tied to culture, an issue without one solution.

Ohio State is attacking the problem in numerous ways. Betty Lise Anderson, a professor of electrical and computer engineering, leads an outreach program to help K-12 students explore engineering. For current students, the university has a Women in Engineering (WiE) program and a chapter of the Association for Computing Machinery Committee on Women (ACM-W).

“The clubs are definitely making a difference,” said third-year student Courtney Campbell, co-president of the local ACM-W chapter. “Ohio State and ACM-W have worked really hard to make sure all women know they’re supported here. You know there are people behind you, and different events like HackOHI/O and MakeOHI/O help support you.”

Julia Armstrong, CSE director of the OHI/O Informal Learning Program, said 20 percent of the 667 students at the 2017 HackOHI/O were women, a 4 percent improvement from the previous year.

Dana Vantrease, a 2002 Ohio State graduate in CSE, was happily surprised to see so many women when she walked into the Ohio Union’s main ballroom last October to serve as a mentor at HackOHI/O.

“Almost every single table I looked at had at least one woman. Things have changed a lot. I still feel like we have a long way to go, but building casual interactions in hackathons builds community.” 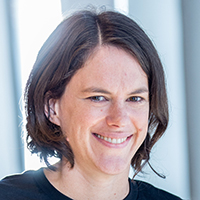 The communal feel of HackOHI/O made a strong impression on Emma Wenckowski, who teamed with three other women at last year’s event.

“What has helped me is walking into a room and seeing other women,” said Wenckowski, a freshman from Chicago. “What’s really helping women is other women creating a space where you can find a community instead of having to fit into the boys’ club. It’s about finding a way to make computer science your realm and being OK that we don’t all think the same way.”

Besides a cultural shift, Ohio State events such as the upcoming MakeOHI/O offer a unique chance to learn outside a classroom.

“Research has shown women benefit from making the connection between application of technology to the theory behind the technology,” Bair said. “If MakeOHI/O shows there is application for hardware skills, then that is going to help retain them.”

Activities like MakeOHI/O that help retention are one thread in a tapestry of ways Ohio State is trying to close technology’s gender gap.

“MakeOHI/O won’t fix it,” Kapoor said, “but it gives women an opportunity to say, ‘I’m in this field, I belong here, and I can do this.’ That’s definitely a powerful thing.”