Planting a path for growth 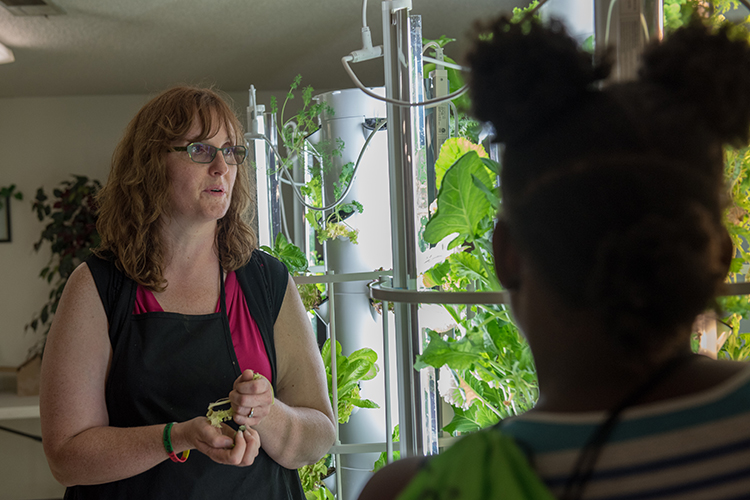 This two-story nondescript brick building belies the vibrant energy inside. Today the narrow room is packed with people and filled with constant chatter. Tall tower gardens line the sides of this space, producing scents of cilantro and basil. Bright, colorful signs display this month’s harvest: kale, red leaf lettuce and other fresh herbs. Kids float around the room, moving from plucking produce to fastening irrigation systems. The woman affectionately known as “Dr. D.” watches with a smile.

“I just love it,” said Deanna Wilkinson, an associate professor in Ohio State’s Department of Human Sciences. “It’s a breath of fresh air.” 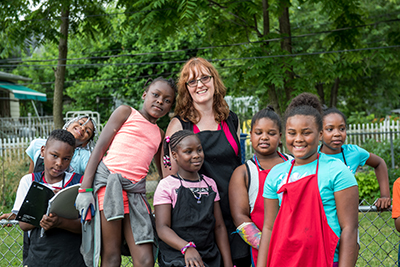 It’s a breath of fresh air for the kids, but for Wilkinson, too. She has a background in criminology and spent two decades studying gun violence among urban youth. But the cycle of violence never seemed to end, and Wilkinson got burned out. She instead shifted her focus to prevention, leading her to start the Urban GEMS program in 2015. The program, which stands for Gardening Entrepreneurs Motivating Sustainability, focuses on teaching inner-city kids how to care for and harvest gardens. Along the way they also learn skills in business, math, leadership and other areas.

“I know at least for the time that they’re with us and we’re working together that this is a positive thing in their lives,” she said.

The program she’s leading today involves school children around 13 to 16 years old. They come twice a week to harvest produce, learn healthful cooking habits and work on other projects. Wilkinson is supported by a number of Ohio State students who serve as student assistants on the project.

In another part of the project, Wilkinson works with children inside Millennium Community School, where the kids tend to aeroponic tower gardens. She also hosts programming at a church in Columbus.

“It’s right here in their community, and we’re building this together,” Wilkinson said.

Wilkinson also uses the opportunity as a research endeavor, focusing on how Urban GEMS impacts the students. Her studies continue, but Wilkinson says the early results are promising. So far, the students are performing better academically, they’ve had more interest in eating healthfully and seem to be improving their leadership skills, she said.

“We’ve also been teaching them entrepreneurship,” said Wilkinson, who took children to the Franklin Park Conservatory to sell produce at the farmer’s market. “That was a huge hit with the kids, and it gave us some name recognition too.”

Multiple grants support Urban GEMS, including funding from Battelle, Ohio State and the federal government. Altogether, Wilkinson reaches about 60 students each week, with the hope of expanding the program in the future.

“All kids should have these kinds of opportunities,” she said.