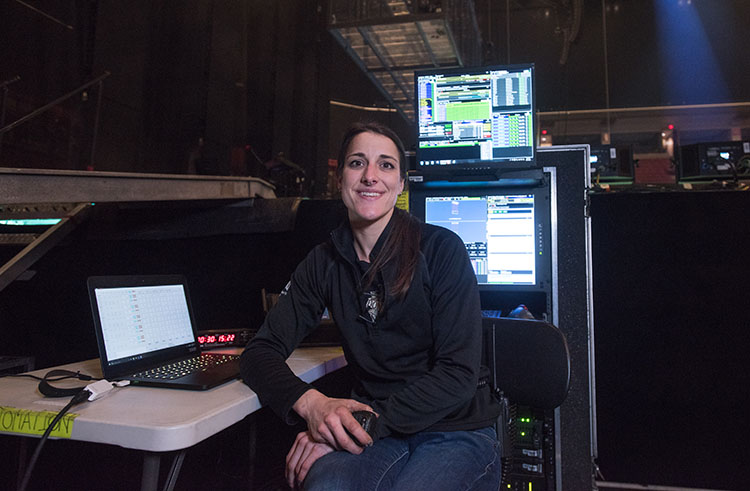 After a decade on the road working on the crew for the biggest names in show business, Brittany Kiefer was coming home.

A 2007 Ohio State theatre major who caught her break thanks to a production assistant job at the Schottenstein Center, Kiefer returned to campus in March as director of automation for the 62-person crew producing Lorde’s Melodrama Tour. “It was so lovely to be back and see all the familiar faces who saw my potential and believed in me,” said the 32-year-old who runs the automation for Lorde’s show. “Just seeing campus and being in Columbus feels like home.”

Kiefer has been a part of major shows since graduating, touring with Beyonce, Muse, Shakira and others. When the Lorde tour is complete, she’ll join Taylor Swift’s summer tour. During her return to Columbus, we caught up with Brittany to find out how her Ohio State theatre degree put her in a position to support some of music’s biggest acts.

What originally got you interested in coming from the St. Louis area to Ohio State to study theatre?

I never thought I would be interested in going to such a big school, but once I went to campus I could really see myself there. It just felt comfortable, and there were so many options of different things to do and people to meet.

You had a wide range of experiences in Ohio State’s theatre program doing everything from writing, wardrobe, working on scenery and building stages, directing and even a little acting. What have those experiences meant to your career?

I feel like I emerged from the program with a broad range of generally good skills instead of one specific knowledge base in one area, and that has really translated well to my career. It allowed me to be a little bit of a professional chameleon and to feel like I didn’t have to do just this one thing that I’d always been doing.

Does having that background help you now in seeing how a show comes together?

Yes. Even though you have a specific job you are doing and you are so entrenched in your world, other people you are working with are doing similar and equally focused things. So it’s absolutely a big plus to understand how it all fits into the big picture. Those who rise to the top in this business are those who understand how their world is affecting other people’s worlds, and how all your work fits into that space on stage.

On the Lorde tour, you are working as the head of automation. What are your duties during the show?

I’m sitting at a desk just out of view stage right with a good visual on all of the automated elements that are moving during the show. I have a timer that runs with every single song. I operate the automation equipment based on the time code clock and what my cues are.  I’m talking to the crew and calling out the movements. It’s a running dialogue, and hopefully it is the same thing at the same time for every show.

Your big break into show business came during a part-time job at the Schottenstein Center. How’d that come about and what were you doing?

One of my professors, Jim Knapp, suggested that I apply for a production assistant job at the Schott. It was good for me, it gave me more practical experience in the organizational and administrative realm as well as becoming familiar with all the gear. I definitely know I had a very good resume because of my experiences at Ohio State. On paper, I really looked good and looked substantial with a wide breath of technical experience. It got my foot in the door.

Learn more about what a day's work looks like for Kiefer in the most recent edition of Ohio State Alumni Magazine.

Learn more about the Ohio State Department of Theatre