Rare access to 13th-century artifacts helped this student pull off an ambitious project. 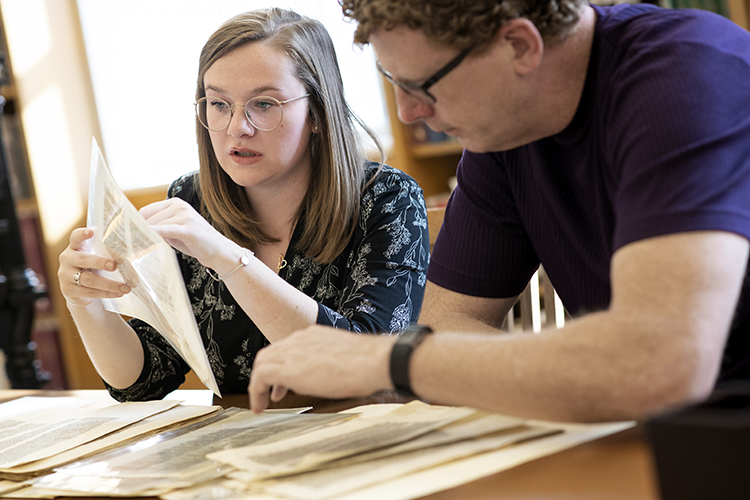 Undergraduate student Rose McCandless channels a meticulous, modern-day Sherlock Holmes as she sharpens her investigative skills to uncover the history of a medieval Bible and track down long-lost folios of the 13th-century book.

That detective work is key to an ambitious research project she’s undertaken, and is possible because of University Libraries’ expansive — and accessible — Rare Books and Manuscripts Library.

Established in 1962, the library houses materials as ancient as tablets from 1750 B.C. to current-day publications … and everything in between. “I like to say our holdings stretch from Babylon to this morning,” says curator Eric Johnson. “The collection is here to support whatever might be ‘of the moment’ for curricular and research efforts of students and faculty at Ohio State.”

For McCandless, a third-year student and an Eminence Fellow, that accessibility made her research possible. Her goal has been to track down missing folios of the "Ste-Geneviève Bible," produced in 13th-century Paris but fragmented and sold in pieces in the 20th century. Some of the book’s folios are owned by Ohio State and the Pontifical College Josephinum, a private college in Columbus. With guidance from Johnson, the library and the Josephinum, McCandless has tracked down 50 additional folios of the Bible, which was produced in a workshop in France around 1250.

Her exceptional efforts will be submitted for publication in a peer-reviewed journal next year, and she plans to participate in a panel discussion, moderated by Johnson, at a conference next spring. 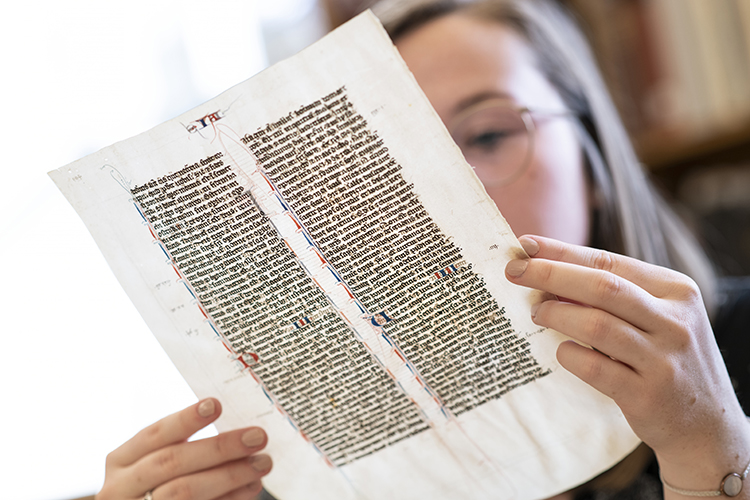 McCandless has tracked down missing folios of the "Ste-Geneviève Bible," produced in 13th-century Paris but fragmented and sold in pieces in the 20th century.

“Ohio State has a collection of unmatched academic value,” she says, “and the access to it is incredible. There’s nothing like working with an actual manuscript; there’s research you can only do with a manuscript sitting on the table next to you. If I had gone anywhere else, I never would have had that access. Not many places are going to let an undergraduate hold an authentic manuscript.”

The library’s collection encompasses more than 250,000 books, manuscripts, publications and other materials — from medieval manuscripts (including McCandless’s Bible) to examples of renaissance drama, American literary archives, historical architecture books, photographs, materials from WWI and WWII and much more. Every part of the collection, Johnson says, is used by students and faculty.

The library’s unusual approach, though, lies in its mission to put the materials — as rare and as valuable as they are — right into people’s hands. “Our inclusive, hands-on approach helps foster an appreciation for the information these materials hold, spanning time periods and cultures, and the importance of a work’s material form as a valuable artifact,” Johnson says. “We’re unique because we want the rare books and manuscripts to be actively used. I constantly fight the esoteric idea that these things are ‘too good’ or ‘too valuable’ to actually be used. It’s important that they are.”

So Johnson actively seeks out opportunities to share the library’s holdings not only with Ohio State faculty and staff, but also with other researchers and universities and even K-12 schoolchildren.

Materials in the Rare Books and Manuscripts Library understandably do not circulate, but may be accessed by request in the library’s Reading Room. To explore the library’s collections, visit the rare books site.