The world is asking a lot of tough questions. At Ohio State, we believe everyone has the potential to answer these questions. We are creating new knowledge, driving change and building vibrant futures. Together, we will advance research in ways not yet imagined.

Using soil to better serve people and the planet 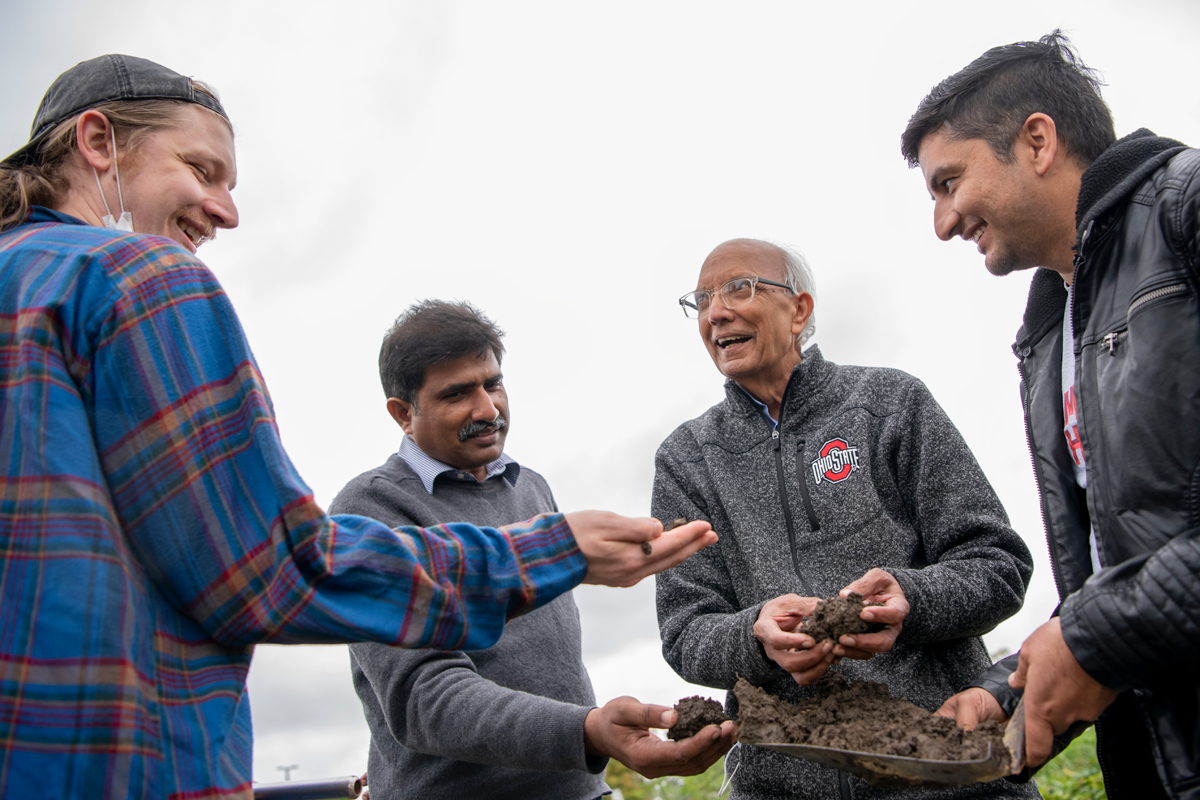 Researchers at the CFAES Rattan Lal Center for Carbon Management and Sequestration explore how to restore degraded soil by restoring nutrients, carbon and organic matter. He's pictured with colleagues (from left to right) Kyle Slenka, Waseem Hassan and Umesh Acharya. 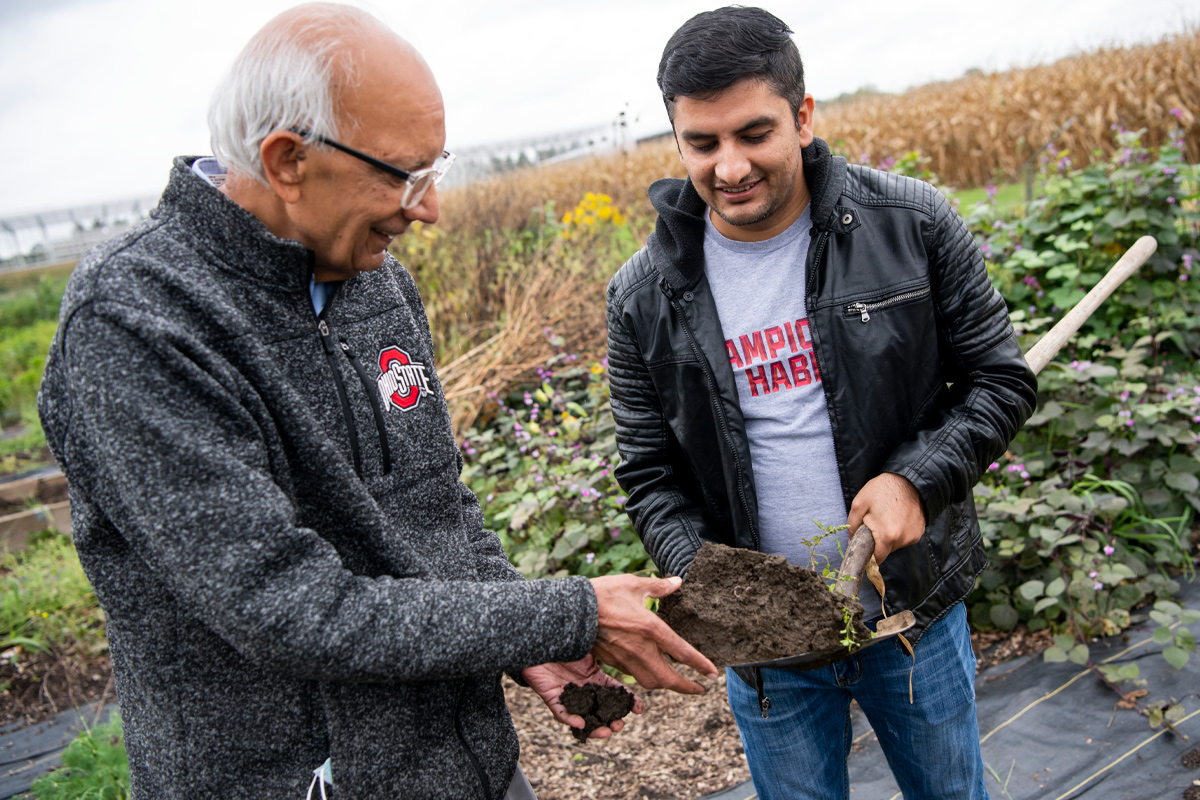 Lal's research has showed that restoring soil quality can be accomplished through regenerative agriculture practices such as no-tillage, cover crops, mulching and agroforestry. 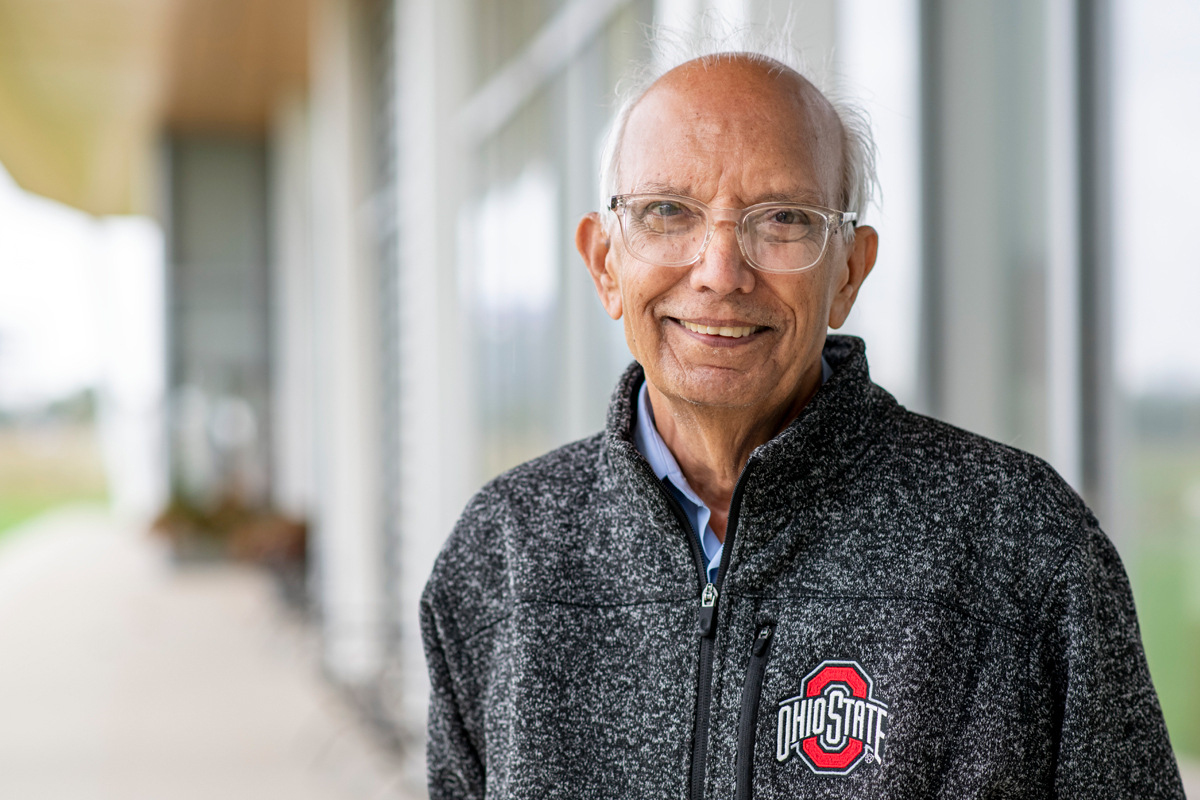 Rattan Lal has researched soil for five decades. In 2020, he was awarded the World Food Prize, which is often referred to as the "Nobel Prize in Food and Agriculture."

Dr. Rattan Lal compares soil to a bank account in which the planet needs us to put more in than we withdraw, especially now as we deal with the challenges of climate change and feeding a growing world population.

“Soil is the basis of all terrestrial life. Every living thing on the planet depends on it,” says Lal, Distinguished University Professor of Soil Science. “We must make sure we manage soil properly and not take it for granted.”

Lal’s internationally acclaimed research at Ohio State’s College of Food, Agricultural, and Environmental Sciences shows how sustainable soil management can help with food security, water quality and climate change. His expertise was recently recognized by President Joe Biden, who named him to the Board for International Food and Agricultural Development in early January.

“Ohio State has been a great institute that has provided me the environment in which I have been able to thrive and contribute knowledge to address global issues,” says Lal, recognized for his contributions to the Intergovernmental Panel on Climate Change that shared the 2007 Nobel Peace Prize with former U.S. Vice President Al Gore.

For individual farmers, research at the CFAES Rattan Lal Center for Carbon Management and Sequestration has reinforced beliefs that you can restore degraded soils by returning nutrients, carbon and organic matter to the soil. This can be done through regenerative agricultural practices such as no-tillage, cover crops, mulching and agroforestry.

“It’s important to have someone like Dr. Lal who actually does the research,” said Dave Brandt, who has long practiced no-till and used cover crops on his 1,150-acre farm in central Ohio’s Fairfield County. “It’s important because a lot of producers say, ‘Well, if the university hasn’t done anything with (regenerative farming), then we don’t want to mess with it.’ But he’s an ambassador.”

Addressing food insecurity and climate change from the ground up

Lal, 77, has researched soil for five decades on five continents. In 2020, he was awarded the World Food Prize — often referred to as the “Nobel Prize in Food and Agriculture” — and the Arrell Global Food Innovation Award. In 2019, he became the first soil scientist to receive the Japan Prize. Among his many other international honors are awards bestowed on him in 2018: the Glinka World Soil Prize, and the World Agriculture Prize.

Such honors have come in part from Lal’s research, cited almost 125,000 times, contributing to the improvement of agricultural yields, especially for the estimated 500 million small-farm stakeholders, particularly in Africa, Asia and Latin America.

Those small farms are similar to the one Lal grew up on in West Punjab, India (now part of Pakistan), where his village home lacked electricity. His research has shown others the benefit of taking better care of their land, which is credited for leading to greater access to nutritious food for 2 billion people across the world.

Improving agricultural yields is important because the world’s population is projected to increase nearly 50 percent in the next 80 years. But Lal’s research is considered a breakthrough because it also shows how sequestering atmospheric carbon in soil can mitigate climate change.

Lal began researching soil carbon sequestration in 1988, a year after returning to teach at Ohio State, where he earned his PhD in soil science two decades earlier. In the early 1990s, he co-authored the first documented report that showed how restoring degraded soil through the sequestration of atmospheric carbon dioxide helped combat the rising levels of carbon dioxide in the air.

“Through the research that Dr. Lal has done about sequestering carbon,” Brandt said, “he’s been able to advise and help a lot of producers understand how to make their soils better and how, as we do that, we improve the environment that we live in. So everybody benefits, not just farmers.”

A total of 180 visiting scholars from around the world have come to Ohio State to conduct research with Lal as part of the sequestration center that he still directs and, as of October 2020, now bears his name. He has mentored 115 graduate students and 54 postdoctoral researchers from more than 50 countries in his career.

“Ohio State has been a source for my inspiration,” said Lal, who has traveled to 106 countries to spread understanding about soil’s importance to the planet. “The university has provided me the opportunity to serve humanity. It really transformed my dream into reality.” 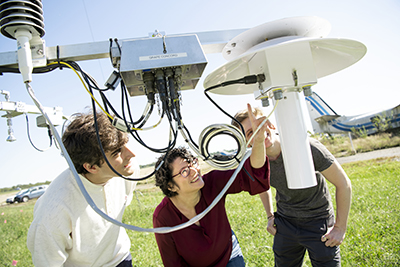 The Enterprise for Research, Innovation and Knowledge is driving discovery at Ohio State.