Much has changed since 1878, when Ohio State graduated its first class of six alumni. But the university's commencement speeches stand the test of time. Read on for wise words to the grads, from 1892 to Presidents George W. Bush and Bill Clinton. 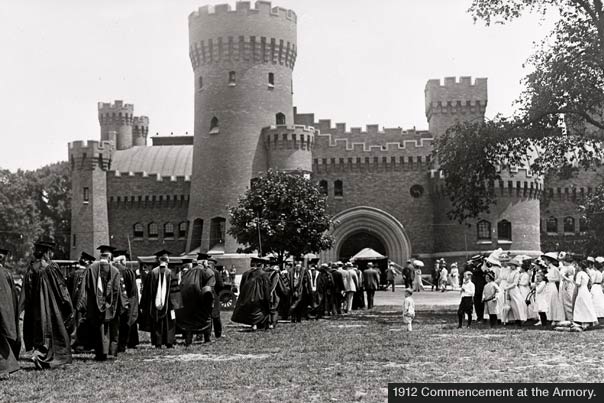 1892: Robert Henry Thurston, a prominent mechanical engineer, on the future of education

"As time passes on, education will progress and change, but it will always represent the latest, the highest, and the best possible basis and buttress of the state. Learning, hand in hand with wisdom; the power to do and the ability to create; scientific attainments and talent for their fruitful employment; appreciation of art and literary culture; the university, in face; lie, one and all, within every real education." (Full speech.)

1925: Herbert A. Miller, Ohio State sociology professor, on "The Quest for the Real"

"There is a possibility that civilization may not survive. If it does not survive, it will be because the particularism of religion, science, state, and race prevail over the reality of which they are only part." (Full speech.)

"Tuesday, August 14, 1945, throughout time will be a momentous date--on that day, peace, in some form at least, began to be restored, and almost simultaneously we turned from the simple but desperate objective of winning the war to new problems of tremendous significance, not least among which is winning the peace. The history of the human race for many generations will, in the next few years, be shaped by us--by you and by me--and by our allies. This is a very great task. What should we work for in the days ahead?" (Full speech.)

1974: Milt Caniff, Ohio State alum, on the ritual of commencement

"This commencement thing is an ambivalent ritual. On the one hand you are bursting to hit the grit for Chillicothe or Ashtabula, desperately glad to leave the big farm--and determined to stay away from the campus forever (or at least until you get those tickets to a Michigan game!). At the same time, you are pleased that someone devised this means of marking the day and that you were able to bring the folks to Columbus for the snapshots in the cap and gown against the stadium background." (Full speech.)

"Today is the greatest day of my life. I appreciate it so much to get to come here and talk to a graduating class at The Ohio State University, the great, great university that you and I have. I would like to start out with something I have used with almost every speech and that is, paying forward, paying forward. And that is the thing that you folks with your great education from here can do for the rest of your life." (Full speech.)

"As educated men and women, you are the beacons on the hill. From you, we expect great things. Someone in this class will cure a disease, publish a novel, invent a machine, win national acclaim. But by doing 'great things' I also mean running for school board, volunteering at a nursing home, building a strong family, reading to a child, being kind to a stranger, being a good friend. We expect such great things from you." (Full speech.)

2002: President George W. Bush on the aftermath of the 9/11 terrorist attacks

"In the last nine months, we've seen the true character of our country. Some believe this lesson in service is fading as distance grows from the shock of September the 11th, that the good we have witnessed is shallow and temporary. Your generation will respond to these skeptics. You will determine whether our new ethic of responsibility is the break of a wave or the rise of a tide. You will determine whether we become a culture of selfishness--or whether we embrace a culture of service." (Full speech.)