"What I did this summer"

Find out how a few Buckeyes spent summer "break"--in their own words.

For Ohio State students, summer "break" meant time to get out and experience the world--through research projects, service, internships and study abroad. Click the map to see how some Buckeyes spent the summer, in their own words. 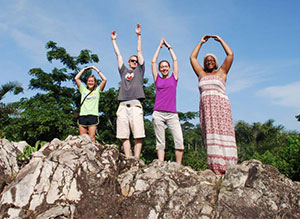 Through the Global May Uganda program, Brown studied culture and politics.

"This past Maymester, I took a wonderful trip through Global May Uganda, which took me to various cities in Uganda and Makerere University. I studied the culture, people and politics of Uganda through the broad lens of human security. From the Mbeira rainforest with swinging monkeys and biting safari ants to the waterfalls and sunsets, it was a very beautiful place." Find out more about this opportunity. 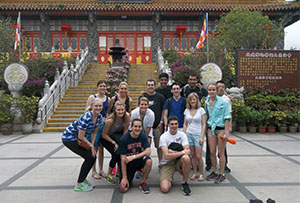 Delaney Cook participated in a marketing internship organized by the Fisher College of Business.

"I traveled to Hong Kong with 45 other students as part of the Fisher College of Business Summer Global Internship Program. We completed a class and were later placed in internships at various companies around Hong Kong. I was lucky enough to be placed at Deloitte as a marketing intern. From the Big Buddha to street markets to the wide variety of food in Hong Kong, our group immersed ourselves in the unique mix of Chinese and Western culture." 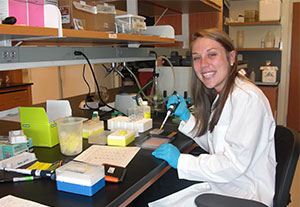 "I began my year-long cancer research fellowship funded by Pelotonia at Ohio State, which is a collaboration between researchers at Ohio State and the University of Maryland to study neuropathic pain that can result as a side effect of chemotherapy. I collected preliminary data and was able to work with some amazing scientists. I also rode 100 miles in the Pelotonia bike ride to help pay it forward in support of future cancer research projects at Ohio State." 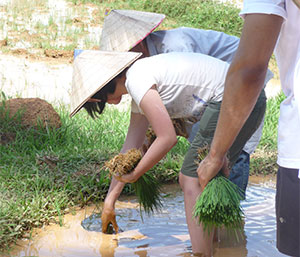 "I studied abroad in Laos, which a scholarship from the Honors Collegium helped fund my program fees. At the Lao-American College, I enrolled in a Lao language class and a Lao history and culture class taught by a premier scholar on Lao history. Aside from classes, I also volunteered at a Hmong organization that promotes education among Hmong women and provides a shop for the village women to sell their handicrafts to tourists." 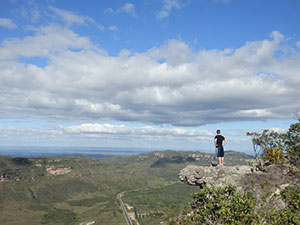 "I participated in the Global May Brazil program, and the athletic department afforded me this opportunity through a scholarship. We visited three cities: Sao Jose do Rio Preto, Sao Paulo and Salvador, where we studied one of the world’s fastest economically growing and most culturally vivacious countries. From visiting local schools to experiencing a crazed soccer game, I learned academically, grew personally and culturally and enhanced my overall Ohio State experience. I will cherish these memories forever." 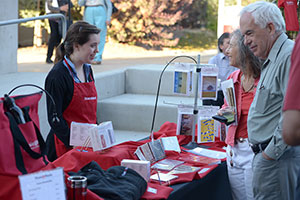 "I interned with Music@Menlo Chamber Music Festival and Institute, a world-renowned classical music organization. Some of my responsibilities were corresponding with media, helping edit and lay out the season program book, developing my own grassroots marketing campaign and writing blog posts for the web. I worked with experienced professionals and musicians, listened to some fabulous chamber music and learned an unbelievable amount about design, marketing, public relations and arts administration." 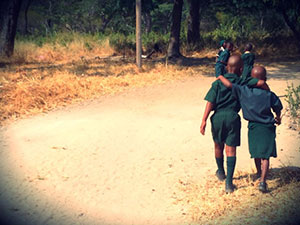 "I had the opportunity to attend the South Africa History and Culture Program, traveling to Zambia, Zimbabwe and South Africa. We visited places where we experienced the everyday lifestyle of the native people and learned about their history. There were many jaw-dropping, heart-wrenching, joy-filled moments; most importantly, I experienced moments of self and societal revelation. The trip was so life-changing that I plan to return in the near future." 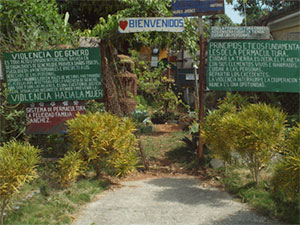 Through an internship, Henry Peller learned about the Cuban food system.

"With financial support from the College of Arts and Sciences, I embarked on a summer devoted to the paradoxical story of the Cuban food system. As a member of an internship program on Cuban sustainable agriculture, my own story was that of pounding nails into rough timbers, salsa dancing and stilt walking under moonlight and conversing in countless gardens. This was my most diverse and intense learning experience, and the lessons I reaped will inform my future pursuits." 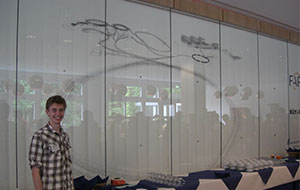 "I completed an internship with the physics experiment PANDA at the Institut für Kernphysik of Forschungszentrum Jülich in Germany. I developed a graphics card implementation of an algorithm to identify and reconstruct charged particles as they pass through the detector. This will help us better identify when an interesting phenomenon has occurred and save its data for later analysis. I am confident that my time spent studying this will be worthwhile for my physics career." 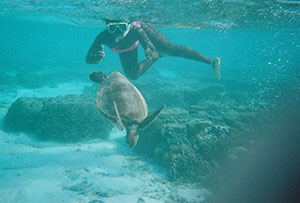 Kelly Ward studied abroad, learning about the environment and sightseeing.

"I traveled to the Down Under--Australia! I took classes on sustainability, preserving the environment and field animal behavior. I visited some of Australia's most famous places: the Sydney Opera House and the Great Barrier Reef. I also had the chance to visit some of Australia's other World Heritage sites like Lamington National Park. This program has encouraged me to be more active about preserving our environment so we can continue to enjoy all the wonders of the world."

Lauren Brown volunteered abroad in Panama with a program called Global Medical Brigades through Ohio State. She spent a week in Panama, working as a volunteer assistant in free medical clinics.

Annelise Del-Rio was part of the Ohio State RUMBA program and worked at the university's Museum of Biological Diversity. She studied the venom genes of sea anemone. Del-Rio was awarded the Hollings Scholarship through the National Oceanic and Atmospheric Administration (NOAA).

Leeza Filonenko spent four weeks in Vilnius studying Yiddish language and literature, after sightseeing in London and Paris. Filonenko, who was born in Ukraine, saw her study abroad trip as a way to connect to her heritage.

Baskaranathan participated in the 2013 Czech Republic Study Abroad Program, including a series of classes at the Czech University of Life Sciences–Prague. The program covered Czech language, history and culture and addressed the specific role agriculture has played in globalization of the Czech economy in the post-communist era. Learn more about CFAES’s study abroad programs.

In May, Metzler studied abroad in Australia regarding Sustaining Human Societies and the Natural Environment. In June, she worked as an environmental education intern at Shaver’s Creek through Penn State.

Mulhall participated in Ohio State's Psychology London and Paris Culture Study Abroad program. Before she left, she studied the culture.

Nosse-Leirer spent the summer working on her thesis, focused on U.S. perceptions of climate change and environmental justice through the lens of rebuilding cities after disasters.

Oppong spent the summer with Limited Brands and Victoria’s Secret as a retail management intern. He followed regional district and store managers and learned about the inner workings of a leading retail brand.

Logan Pfeffer’s summer research at OARDC (Ohio Agricultural Research and Development Center) involved evaluating the effect of farming practices, including organic vs. non-organic, on the antibiotic-resistant bacterial population in cattle. The funding for the project is coming from an Undergraduate SEEDS grant from OARDC and from the Department of Food Science.

Sawyer spent her summer studying Spanish, experiencing life abroad and learning more about Ecuadorian culture. She traveled for a research fellowship through Ohio State's Undergraduate Research Office and also received a grant from Arts and Sciences and from Undergraduate Student Government.

Vaughn studied in Copenhagen, Denmark, through the the Danish Institute for Study Abroad.