The buildings in the North Residential District may be new, but the tradition of honoring Ohio State veterans who died in service has been longstanding.

Ohio State has long honored those who have served our country.

Since 1962, the names of buildings in the university’s north residential area have paid tribute to student and alumni veterans. More than 50 years later, the North Residential District Transformation (NRDT) continues the military-naming tradition, with new residence halls and a market honoring veterans who served in conflicts ranging from World War I to Iraq.

A panel of students and representatives from the Office of Student Life and the Office of Military and Veterans Services selected the honorees. Nikole Prete, a member of the NRDT team in Student Life, contacted their family members to let them know about the project and to request artifacts to display in the lobbies of each hall.

“I’ve been overwhelmed by the strong positive response,” Prete says, “and how honored they are to have Ohio State designate buildings to carry on the names of their loved ones.”

Oralia Torres-Mathew believes her brother Pfc. Omar Torres would be humbled by being held in such high regard. He earned a full scholarship to Ohio State in 2005, studying political science and Chinese. He joined the Army Reserves his first year on campus and was called to active duty his second year. He was killed in 2007 in Baghdad. 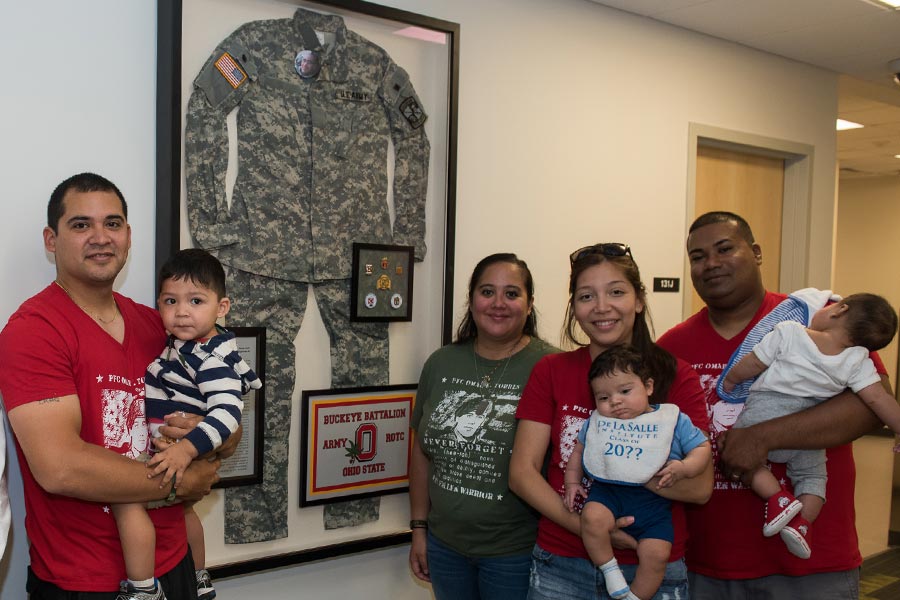 The Torres family was on hand during move-in day at the beginning of fall semester.

“Omar wore his heart on his sleeve and accepted anyone and everyone for who they were,” Torres-Mathew says. “He’d be so proud and honored that he would turn it around so others feel special, too. That's the type of person he was.”

Maj. Ray Mendoza joined the Marines in 1995 after graduating from Ohio State. A member of the men’s wresting team, Big Ten finalist and alternate for the 1996 Olympic Games, he lost his life in 2005 during his third tour of duty in Iraq.

“Ray was an inner New York City kid who, by the grace of mentorship and kindness, found his life’s journey to land at Ohio State,” says his wife, Karen. “He appreciated each opportunity, each day to seek self-improvement, each new experience he got to live as a Buckeye. Friends he made during college became the family he chose.”

She uses the word “surreal” when thinking about Mendoza’s legacy as becoming part of college memories for current students. “The extension of honor to our family brings comfort and pride that reaches us in California. We are truly an example of when you are a Buckeye, you are a Buckeye for life,” she says.

In May 1970, John Houston and four other Ohio State students wrestled the American flag from Vietnam War protesters during a riot on campus. They kept it safe until help arrived.

“Our parents raised us with a sense of serving others and, in particular, serving in defense of our country,” says John’s younger brother, William Houston. “I remember John’s love of country, his drive to excel, his love of family and friends, and most importantly, his devotion to God.”

He graduated in 1975 and joined the Marine Corps. He lost his life during training exercises, when his helicopter crashed in bad weather.

While families hold on closely to memories of their loved ones, many of the students moving into the residence halls this fall were unfamiliar with the inspirational stories behind the names. Staff at the Bowen House helped students become acquainted with the story of Col. Clotilde Dent Bowen, the first African American to graduate from Ohio State’s College of Medicine and to serve as a physician and female colonel in the U.S. Army. 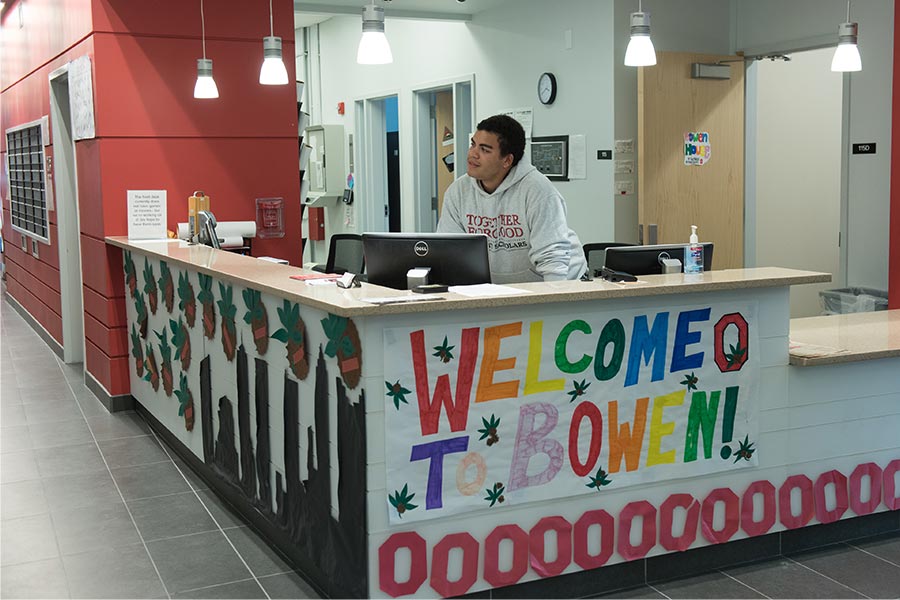 Bowen House used engaging programming to share the story of its namesake.

Students received ice cream, toppings and utensils as they completed short activities on each floor.

“I think this helped establish a culture that let residents know Dr. Bowen’s memory is alive in the building, and her values are reflected in the leadership,” Robinson says, noting that a legacy week planned for the spring will focus on service, leadership and empowerment with activities that embody Bowen’s values.

Emily Pellegrino, a second-year student from Cleveland, considers Alice Rebecca Raney a “wonderful role model to the many students who live or interact” in Raney House.

“The hall bearing her name is a constant reminder of the courage and strength she had,” Pellegrino says, adding that her own grandfathers served in the Army and Navy.

Ryan Nelson, a first-year student from Ashtabula, Ohio, and a Scott House resident, sees the naming project as “a monument to strength, not just of body, but more significantly of will.”

“I feel the goal behind the naming is to remind those who come in contact with the university that they can succeed, no matter how formidable the obstacle, because of the power of will,” he said.

“A monument to strength, not just of body, but more significantly of will."–First-year student Ryan Nelson

Support the Office of Military and Veterans Services today.

Mark of a champion

Seven decades after he gave his life, alumnus and World War II veteran Bill Nosker's legacy survives. Read his incredible story — and those of other alumni veterans — in the Ohio State Alumni digital magazine.

Curl Hall (Curl Market): James Curl, a 1940 Ohio State graduate and a decorated member of the Army Air Forces who earned a Silver Star, was killed while piloting a fighter plane in 1945.

Lawrence Tower: (Formerly Lane Avenue Residence Hall) Robert Lawrence ’65 PhD, the first African American astronaut in the United States, was killed during training when the F-104 he was copiloting crashed.

Mendoza House: (Formerly Neilwood Gables) Ray Mendoza ’95 joined the Marines in 1995, wrestled with the All-Marine Wresting Team and was an alternate for the 1996 U.S. Olympics. He was killed during his third tour of Iraq in 2005.

Raney House: Alice Raney ’39 joined the Army Nurse Corps and was the first woman from Ohio State to die in World War II after falling ill while on active duty in 1944.

Scott House: Robert Scott, an Ohio State student who enlisted in the Navy in 1938, was killed during the Pearl Harbor attack. He was the first Buckeye to earn the Congressional Medal of Honor (posthumously) in either world war.

Torres House: Omar Torres, a scholarship student who joined the Army Reserves as a freshman, was called to active duty his second year and was killed in Baghdad in 2007.

Blackburn House: John Blackburn left his studies at Ohio State to join the Navy in 1939. He was killed in the attack on Pearl Harbor in 1941.

Busch House: Jon Busch ’64, a member of Ohio State’s ROTC and the tri-service national military honor society, died in Vietnam when his plane was shot down in 1967.

Houston House: John Houston ’75 enlisted in the Marines after graduation and lost his life during training exercises when his helicopter crashed in inclement weather.

Nosker House: William Nosker ’41 earned the Bronze Star and the Air Medal in World War II. He died in a plane crash in 1944.