Battling for a common good

For more than 30 years Ohio State and Michigan fans have used their rivalry as a way to increase blood donations close to home. 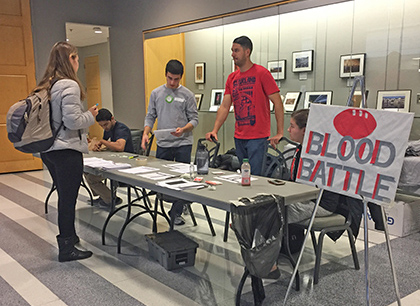 With ‘Beat Michigan Week’ days away, Buckeye fans can lend their support in defeating Michigan by bleeding scarlet and gray to save lives.

The annual Ohio State-Michigan Blood Battle takes advantage of one of the largest rivalries in college football and pits the two universities against one another to see which can raise the most blood donations in the weeks leading up to the game. This year’s competition runs through Nov. 23 with numerous blood drives being held at locations around campus. Results of the Blood Battle will be announced during the Nov. 26 game in Columbus, and members of the American Red Cross Club at Ohio State have set a goal of 2,500 pints of blood, but hope to reach 3,000 for the first time.

“It's not just about donating for your team and pride. You are donating your blood and part of you as a way of helping save someone else's life and, honestly, well being,” says Garrett Eiben, vice president of communications for the American Red Cross Club at Ohio State. “I think that’s one of the best things about Ohio State and how the community comes together to support it."

History off the field

In 1982, students of Alpha Phi Omega, a service organization at Michigan, collaborated with the American Red Cross to start a blood competition between their school and Ohio State. The November timing coincided not only with The Game, but also a time of year when the Red Cross traditionally had a lower blood supply.

Michigan won the first blood battle (but lost The Game) and leads the overall series 19-14. Ohio State has won three of the last four.

Over the course of its history, the Blood Battle has grown into one of the largest blood competitions in the country with fans from Ohio State and Michigan combining to donate nearly 215,000 pints of blood. With each donation saving up to three lives, the competition has helped hundreds of thousands of individuals in critical need of blood every year.

In the United States, someone requires blood every two seconds and more than 38,000 blood donations are needed every day. By using the rivalry to fuel competition between the two schools, members outside the football community can not only fight for their school, but give the gift of life to individuals in their community.

“You can say you personally had a hand in helping beat Michigan,” says Eiben. “The best part is that your hard work, whether it be a donation of blood or donation of your time as a volunteer, goes to the betterment of others and possibly lifesaving resources.”

Although only one university receives top honors, the real winners of the Blood Battle are always the patients who rely on potentially lifesaving blood transfusions to help them through injury and illness.

“The blood donations help beat Michigan, but they also help so many people live another day,” says Rodney Wilson, external communications manager for the American Red Cross. “Blood Battle blood donations could mean a child with cancer can get the treatment he needs, or a new mother survives birth complications to go home with her new baby.”

Ohio State alumni and fans can participate in the Blood Battle from anywhere in the country and have their donation counted towards the total score. To make your donation count, give blood with the American Red Cross and log it here in honor of defeating TTUN.