A formula to fight back 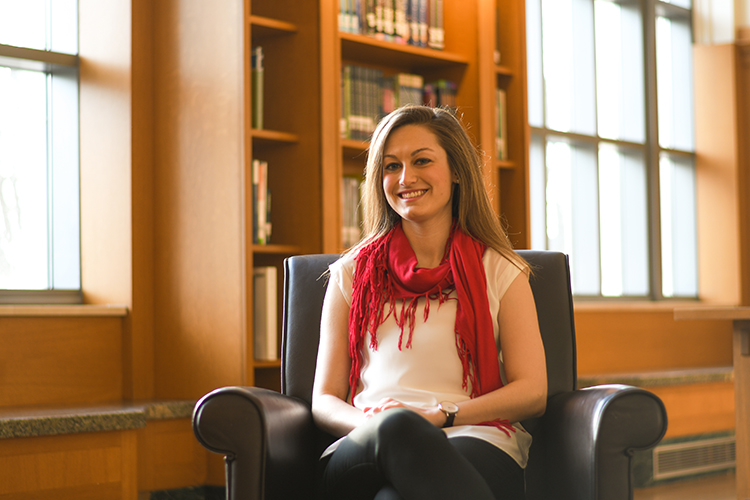 The news coverage became constant, and the stories continued to weigh on Ashley Dundon’s mind. The opioid epidemic was tightening its grip on Ohio and across much of the country, leaving devastated communities behind. Like many people, Dundon found the steady stream of stories tough to shake. But unlike many people, Dundon found herself positioned to actually do something about it.

Dundon’s interest in public health and statistics allowed her to attack the problem from a new angle. Then, by partnering with community agencies and tapping into Ohio State’s faculty expertise, she worked on a real-world solution that she hopes will have big impacts.

Dundon became interested in public health during high school, and it was during that time she decided to dedicate her life to helping others. With the goal of one day becoming an emergency room physician, Dundon enrolled at Ohio State in 2014. During a summer break back home in the Cincinnati area, she got her first taste of data analytics as a way to tackle public health issues. During an internship with Cincinnati Children’s, she worked on a project using data to look at child abuse.

“It’s kind of an emerging field in medicine,” Dundon said. “I decided I wanted to continue that research here at Ohio State.”

Back in Columbus, Dundon’s advisor put her in touch with Dr. Ayaz Hyder, an assistant professor in Ohio State’s College of Public Health and a faculty member with the university’s Translational Data Analytics Institute. TDAI is a unique effort that fosters collaboration and innovation in data analytics in order to solve global issues of importance. Recognizing this as an emerging field, Ohio State also created one of the first undergraduate data analytics majors in the country.

By having this interdisciplinary major in data analytics, Ohio State is helping to produce practitioners in this rapidly-growing field with expertise that cuts across core disciplines of computer science, mathematics and statistics, and helps students develop critical thinking, problem-solving and communication skills.

“This effort shows that public health is proactive and responsive to the needs of the community, but in a way that we engage with the community.”

Hyder connected with Dundon and helped guide her research that looks at the opioid epidemic in a new way. Dundon’s project involves working with county health officials and collecting data around opioid overdoses and recovery efforts. By creating a model using this data, Dundon is working to identify “recovery deserts,” or places where people are overdosing but have barriers to getting help such as lack of childcare or transportation.

“There’s been a lot of talk about how we can fix the opioid epidemic, but not as much understanding of how it works,” said Dundon, who hopes county officials can use her research to better allocate resources to target those who need help and identify places and times people are most likely to overdose.

The experience has allowed Dundon to enhance her classroom learning – she’s a biology major and a public health minor – by adding new skills and contributing to research that could have a major impact.

“When you’re actually looking at real data, where the problems come from and where they progress, you realize it’s a lot more complex,” Dundon said. “It’s been a rewarding experience.”

Learn more about the College of Public Health