A sweet twist on fine art

Natalie Sideserf '08 is finding success using her degree in an unexpected way. 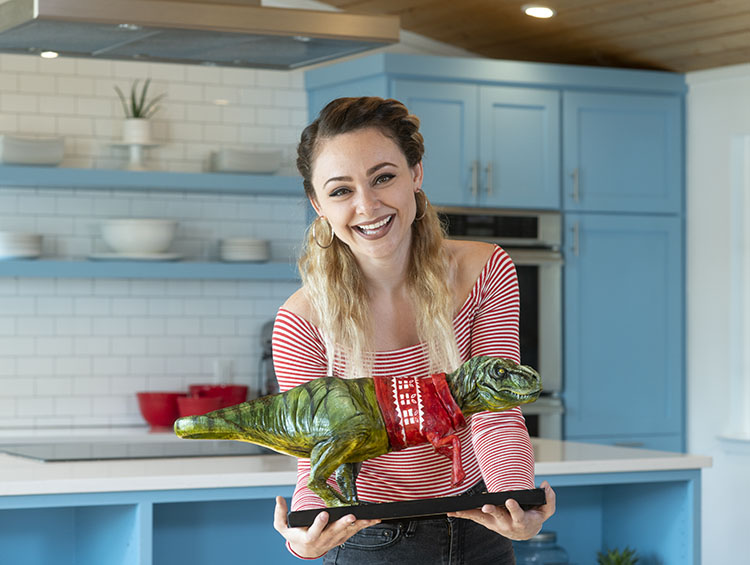 Natalie Sideserf combined her creative spirit and Ohio State education to create something unexpected. It changed her life.

Natalie Sideserf is as animated as the characters her Sideserf Cake Studio brings to life: toothy llamas and massive porkers, a sloth playing table tennis, a unicorn with an ice cream cone horn, a lasso-waving armadillo wearing a tin can hat.

Sideserf ’08 instills this passion for faces, for personality, for expression — for connection — in all of her creations. Her approach to each cake “as a little sculpture,” she says, “came naturally out of my experience at Ohio State.” Her fine arts education, with a concentration on drawing and painting, “definitely influences what I do today.”

In 2011, Sideserf moved from Cleveland to Austin, where she made a lifelike Willie Nelson cake that went viral. She’d go on to open her cake studio and star with her husband and business partner, Dave, in two seasons of the Food Network’s “Texas Cake House.”

“It’s not like you can really go to school for sculpting cakes,” she says. “But the Ohio State connection is definitely there. That support as an artist as you find your way is invaluable.”

We spoke to Sideserf about her trajectory from art student to cake artist to TV personality.

Talk to us a little bit about the progression of your career, how you got into this to begin with.

As a child, I was always very good at art. So I continued to do it through high school, and then I went on to Ohio State to pursue a fine arts degree. I was able to take some sculpting classes — I really love the wheel. After I graduated, I tried to figure out my next step.

I worked in a bakery for about two years, and then I went on to make a cake in the shape of Willie Nelson, and my brother put that cake on Reddit and it became the number one submission on the front page. Once that happened, it had millions of views, and it went viral, and it was that kickoff point where I started Sideserf Cake Studio. That one cake started my business.

What did you learn at Ohio State that you carried over into your career and use now every day?

While I was at Ohio State, I was using these different materials, and I was learning how to sculpt and be artistic. So when I approach cake, I approach it in the exact same way. I had to teach myself how to use certain materials. It's not that easy. You have to get your hands on it and work with it. And I think my education at Ohio State was absolutely necessary and absolutely influences how I work with cake today, and why I've had some successful moments.

Are other people making cake like you make cake?

When I made the Willie Nelson cake, I decided I was going to make a bust cake because I had made a bust sculpture in college. I did some research online and  looked up bust cakes, and I could not find any. So instead I just researched some traditional fine art busts and made a cake inspired by those. And when I made that cake, everybody was just shocked because it was like, what is this thing? It's a bust, it's a cake, and there was a piece missing in the photo, and everybody was just really shocked by it.

You said Ohio State taught you how to think. What do you mean by that?

Right out of high school I always knew I was naturally interested and naturally talented when it came to art. But I didn't think outside the box as much. I wasn't sure how to make conceptual art.

When I was in school at Ohio State, I was able to really learn to have some meaning behind your work. It's just asking questions and making design choices that really matter. And I absolutely do that with my cake sculptures.

You might not notice subtle moments where a flamingo's head is slightly tilted — and I'm overthinking, you might say — but I really like to research and try to think of things in a more conceptual way. I made a 5-foot-long pig cake — it was huge. But what was really cool about it was putting it into this giant space. It was for the Fabulous Food Show in Cleveland. It was this huge space, and I thought, how can I really make an impact and have people interact with the cake?

Instead of it being just a one-sided visual cake, I actually did a cheeseburger with two buns that were open, and there was a space in between. In the background, the 5-foot-long pig lined up with the cheeseburger, and it made a bacon cheeseburger. It was this goofy, fun thing, but it was totally something I would have done and learned at Ohio State — thinking of things in a different way.