An ear for the record book 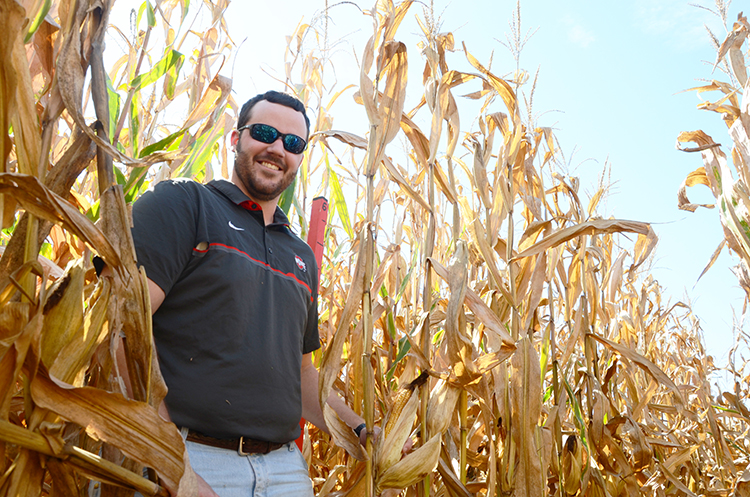 There aren’t a lot of people who decide to go after a Guinness World Record while studying for a master’s degree, and even fewer who do it because they want to help farmers. But Trey Colley is that kind of guy. He grew up with an agricultural background, which instilled in him a sense of responsibility to grow food in a way that “positively impacts the environment and the people who consume that food. That’s my motivation.”

A second-year master’s student in the Department of Food, Agricultural and Biological Engineering with a research interest in digital agriculture, Colley came up with the record-setting idea last spring: During the 2017 growing season, he would try to collect as much data as possible for a single stalk of corn grown at Ohio State’s Molly Caren Agricultural Center in London, Ohio.

Colley says the resources available at Ohio State put him in position to go for the data-collection record.

“There are a lot of opportunities here above and beyond other institutions — the resources here, the diversity on campus and an agricultural industry that is light years ahead of other parts of the country in terms of technology and the level of production.”

Beyond the novelty of going for a world record in the most data ever collected on a single corn plant, the project’s ultimate goal was to help farmers learn how digital agriculture can help to increase production. “We wanted to see what technologies provide the most value for farmers, and how they could use those technologies to become better stewards of their land and environment,” says Colley. 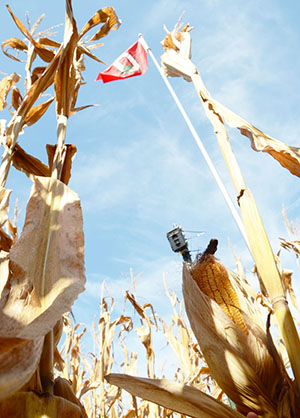 To capture data, Colley and his team placed sensors on and around stalks of corn.

With the support of his mentor, Associate Professor John Fulton, PhD, and Molly Caren farm manager Nate Douridas, Colley set his sights on one corn plant marked by an Ohio State flag and named Terra after the “terabytes” of data he dreamed of amassing. The crew employed data collection methods that ranged from machine data imported directly from the tractors to thermal imagery collected using airplanes. “The world record aspect of the project was unique, but we were already collecting a lot of the data, and many farmers in the region are using these technologies,” says Douridas. “This project involved going through the extra steps of documenting and analyzing the data to account for how much of it was accumulated over the entire growing season.”

The results? A whopping 18.5 gigabytes of data collected (for context, the iPhone’s base model has 16 gigabytes of data storage), a world record application pending with Guinness and a lot of useful information for farmers.

These are important takeaways for agriculture, which has seen its share of technological challenges—from internet connectivity issues in rural areas, to some farmers resisting the adoption of new technologies. “Every farmer has a tool box,” says Colley. “We tell them, ‘This is your digital toolbox, where your tools might be apps instead of wrenches.’ It’s a shift in thinking about digital tools that can help improve production.”

Fulton said that Ohio State offers a tremendous learning experience in digital agriculture. “From a research and undergraduate plus graduate experience, we have many opportunities for students to get involved. Ohio State has a strong faculty and staff in this area who are trying to drive innovation and research that is ultimately focused on solutions to help agriculture production in the state of Ohio and beyond.”