Designing her own mission 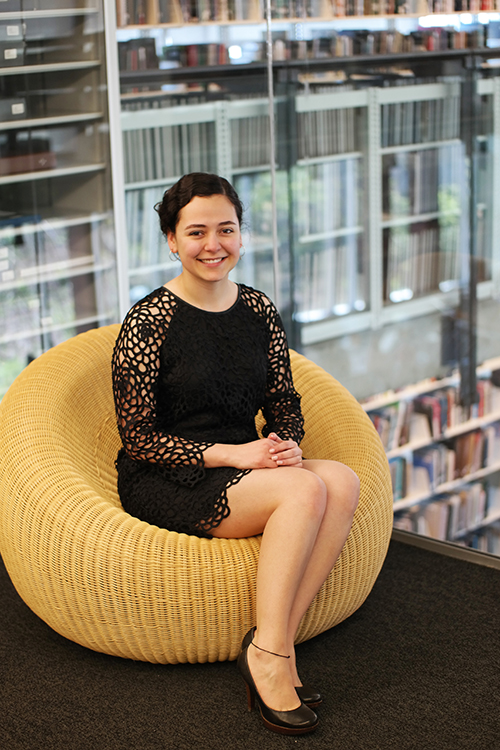 Persistence paid off for Luisa Talamas many times throughout her life. It allowed her and her family to flee Mexico after drug violence invaded their hometown. It eventually led her to The Ohio State University and then to great connections that opened up new doors.

Persistence led to a once-in-a-lifetime opportunity to collaborate with NASA engineers, and design a system that could actually improve life in space. The path hasn’t always been easy, but Talamas’s persistence is already paying off in big ways.

When Talamas and her family fled Chihuahua in 2010, the city was surrounded by violence. Drug cartels had waged a war that took its toll on citizens across the Mexican state. Talamas recalls the growing violence that led to constant kidnappings and regular pops of gunfire.

“I very distinctly remember when there was a shift between times I would be fine going out to play, and the time when you just couldn’t do that,” she recalled. “It was just something that became part of our lives.”

By 2010, amid the growing violence, her family seized an opportunity to head north to Austin, TX. After settling in at her new high school, Talamas started to think about college opportunities. Having two parents who worked in architecture, Talamas always had an appreciation for design. Meanwhile, her science teachers recognized her strength in engineering and pushed her into that field. She excelled in art, too, and her teachers proposed a career in a creative filed.

After some research, she learned there was one field that combined all her passions: industrial design.

“The principles of industrial design can really be applied in any field,” she said. “I felt that it was a great opportunity to merge some of my interests in science into design.”

Her decision to make the long journey to Ohio came after carefully considering schools that offered industrial design. But she also wanted exposure to other fields, not only to expand her knowledge, but to influence her design projects.

“I thought that if I went to a private school that specialized only in art and design I wouldn’t be able to find all these other interests of mine on the same campus,” she said.

“At Ohio State, I’ve taken classes in physiology, biology, astronomy. I believe that knowledge in different areas can influence design in a very positive way,” she said.

Talamas, who’d been fascinated with space travel since she was young, made a quick connection with Ohio State astronomy professor Todd Thompson. He said he was impressed from a very early stage with Talamas’s focus.

“In Luisa's case, she took my general education astronomy course, and used me as a sounding board for her design ideas,” Thompson said. “She already had well-developed notions about what she wanted to do. My role was just as good listener and question asker. Sometimes the faculty student relationship is at its best when the student leads on the big picture.”

That big picture came into clearer focus as Talamas started to brainstorm ideas for her senior project.

A new space for collaboration

Prior to her senior year, Talamas was in search of a senior project that did more than check the box on her list of graduation requirements. “I wanted to do something that would be useful and meaningful,” she said.

In search of a topic, she cycled back to the idea of space exploration, something she’d always been interested in. Then, she let her persistence take over.

After several weeks of attempts, Talamas contacted NASA’s Johnson Space Center in Houston and asked for the opportunity to explore their work. She was gladly welcomed, and spent two weeks on campus, meeting with engineers and researchers from a wide range of backgrounds, including spending extensive time in the Center’s spacesuit lab.

It was here that she realized the challenges spacesuits present. She learned that the space environment is not conducive to laundering at all. Clothes that are worn by astronauts generally become waste once used a few times, in order to keep good hygiene. And the waste is expensive, too. Talamas learned that it costs about $10,000 to send one pound of clothes to space. “A big challenge is obviously microgravity, and combined with the limited resources in space, laundering is a big problem,” she said.

Before her time on the NASA campus was over, she connected with engineer Robert Trevino from the Crew and Thermal Systems Division to continue an interesting conversation during the coming school year. Her visit gave her an idea. Could she team up with an engineer and build a space laundry system as her senior project?

Once she was back on campus, Talamas stayed in contact with NASA engineers and also connected with electrical engineering student Joey Chiu to begin the design and building of a device that could process laundry in a zero gravity environment. The team advanced the idea rapidly through the school year and found an opportunity to share their work through Ohio State’s Innovation Studio. That studio was hosting a challenge presented by the Center for the Advancement of Science in Space (CASIS), which manages the International Space Station.

The nugget of idea that Talamas developed was now getting feedback from a team of judges with direct connections to the International Space Station. It was again an example of her using her persistence to advance an idea.

“And while Luisa’s innovation was the most impressive solution for the CASIS Challenge, what’s more impressive are Luisa’s vision, unmatched talent, and drive to overcome barriers.”