As an undergrad at Ohio State, Charlie Fryer had the opportunity to contribute to innovative research that may change how we process fossil fuels. 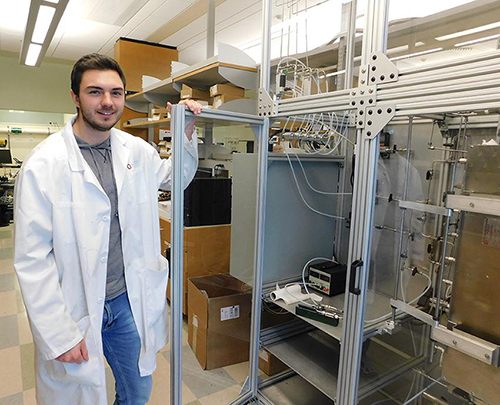 A quick glance at his resume and you might assume Charlie Fryer has spent many years as a professional research scientist. His name is attached to two patents and numerous research publications, and he’s also worked alongside one of the leading experts in clean-coal technology. But all of this experience came during his undergraduate years at The Ohio State University.

“Renewables are the future,” Fan said. “We need a bridge that allows us to create clean energy until we get there — something affordable we can use for the next 30 years or more.”

After researching under Fan, Fryer became the first recipient of an undergraduate patents/publishing award, and he also won first place in the Engineering-Process and Systems category at the Denman Forum, Ohio State’s undergraduate research event.

After graduating in December 2017, it’s no surprise that Fryer landed a plum job as a research engineer for ExxonMobil in Houston.

How did you end up working in Dr. Fan’s lab?

At the start of my sophomore year, I got an email from my advisor about an open position in Dr. Fan’s lab. I looked him up on the university website and I was impressed with all the clean energy work he was doing. Everyone looks up to him for the research he’s doing at Ohio State. I really wanted to jump on that opportunity. I applied and learned a little bit more about the chemical looping research they were doing and that really appealed to me. I went through the interview process and was lucky enough to get a position in his lab.

When I first joined the lab, I was nervous because everyone seemed way smarter than me when it came to chemical engineering. At first I thought maybe I don’t deserve to be in this position. But something clicked in me that I really wanted to contribute something and prove to myself I could do it.

I started working on this project with another undergraduate student. We were finding a way to optimize a system we were working on. It’s really great that in Dr. Fan’s lab they were able to supply me with the resources to do full-scale experiments and a team of researchers to verify what I was working on. There were just so many opportunities and resources available to me. Dr. Fan’s lab was really helpful in terms of helping me accomplish what I wanted to do at Ohio State.

Not many undergrads have their names attached to two pending patents and several research publications. What was it like working on research that could really have a big impact in the science community?

It was really exciting. I was obsessed with it for a good amount of time. I couldn’t stop thinking about the implications of what I was working on. I love nature and the environment, so working in clean energy is very important to me. I never thought anything like this would happen to me. I’m so grateful for the resources here, and for my mentors, who have been very generous with including me in the credits.

How did your experience at Ohio State prepare you for life after graduation?

I was doing a lot of simulation work in Dr. Fan’s lab. A lot of it was just computer-based modeling and simulations. What I’ll be doing at ExxonMobil is basically the same thing, just more in-depth. So what I was doing in Dr. Fan’s lab will directly relate to the job I’ll have.

I hope that undergraduates will become more aware of the research experiences at Ohio State and the opportunities they can gain from that after graduation.

How would you sum up your experience at Ohio State?

This experience has completely changed my life and the outlook for my career. I’ve made lifelong connections from the research I’ve done at Ohio State. I’ve had incredible mentors, including Dr. Fan and the post-doc I worked with, Dr. Mandar Kathe. Both of them have been so influential and supportive of the work I’ve done at Ohio State and helping me develop my career. Ohio State has a lot of resources available just because it’s a big university — that’s something that really drew me to the university in the first place, and I think that’s what I appreciated most about Ohio State.