A first-generation student finds her path to serving the underserved

Jessica Zimmer arrived at Ohio State, her dream school, in August 2016 with visions of becoming a doctor.

As a first-generation student with no physicians in the family, she saw a difficult road ahead. Zimmer did not, however, see herself struggling as much as she did her first semester.

“I started crying in front of everyone. I didn’t know what I was doing,” said Zimmer, who graduated from London High School, a small, rural school. “I had never failed anything. I just felt really lost.”

Bartoszek-Loza took Zimmer under her wing, teaching her how to prepare and learn at the university level.

“At a big university like Ohio State, that took me by surprise — that a professor would do that,” Zimmer said. “She knew I needed a path, someone to lift me up. Her help served me further than knowing atoms or the periodic table.”

Zimmer is now a fourth year pre-med student majoring in biology and Spanish with a resume packed full of internships, volunteering, research, study abroad, reference letters and affiliations. This past spring, she nailed her MCAT (Medical College Admission Test) and spent the summer applying to 20 medical schools — including Ohio State’s — all over the country.

She’s even a chemistry tutor.

As a first-generation student – a student from a family in which neither parent earned a four-year bachelor’s degree – who began her Ohio State experience humbled, she said her success has come from building relationships and getting involved.

Both started before she attended her first class.

So many places to get involved, so many rewards through involvement

Prior to her first semester, Zimmer signed up to receive emails through the Undergraduate Research Office. One lab opportunity at the Endocrinology Research Associates caught her eye. After surprising herself by getting the internship, she began doing research for Dr. Elena Alexia Christofides ’91, ’95 MD.

Along with gaining research experience, Christofides paid for and helped Zimmer gain her Phlebotomy Certification — allowing her to draw blood. Zimmer is currently the clinical research coordinator for the lab, supervising eight college interns.

Among the many clubs and organizations Zimmer joined included the medical fraternity Phi Delta Epsilon, which helped her connect with other pre-med and med school students and learn more about Ohio State’s resources. It was there she was introduced to La Clinica Latina, a free student-run medical clinic for the Spanish-speaking community where Zimmer began volunteering in 2017.

Zimmer’s ability to speak fluent Spanish and communicate medical terminology at the clinic improved vastly after she took advantage of a study abroad opportunity through the Spanish department. In the summer of 2018, she traveled to Valparaiso, Chile, to work as a clinic volunteer at Consultorio Esperanza, a government hospital located in an impoverished area. There, Zimmer assisted health professionals.

“It was an immersion and it gave me so much confidence in my fluency,” Zimmer said.

La Clinica Latina and her study abroad opportunity brought Zimmer face-to-face with physicians who embody what she hopes to become: a doctor who serves the underserved. Her goal is to become an obstetrician to women who struggle with language and health care barriers.

“Minority communities have a much higher infant mortality rate and that’s unacceptable,” Zimmer said. “Imagine how hard it is to be an immigrant in an English-speaking world, to have nowhere to turn. Because of the language barrier, they don’t think they can seek help. I want to help these women get the resources they need, to have healthier babies. I want to make a difference for them." 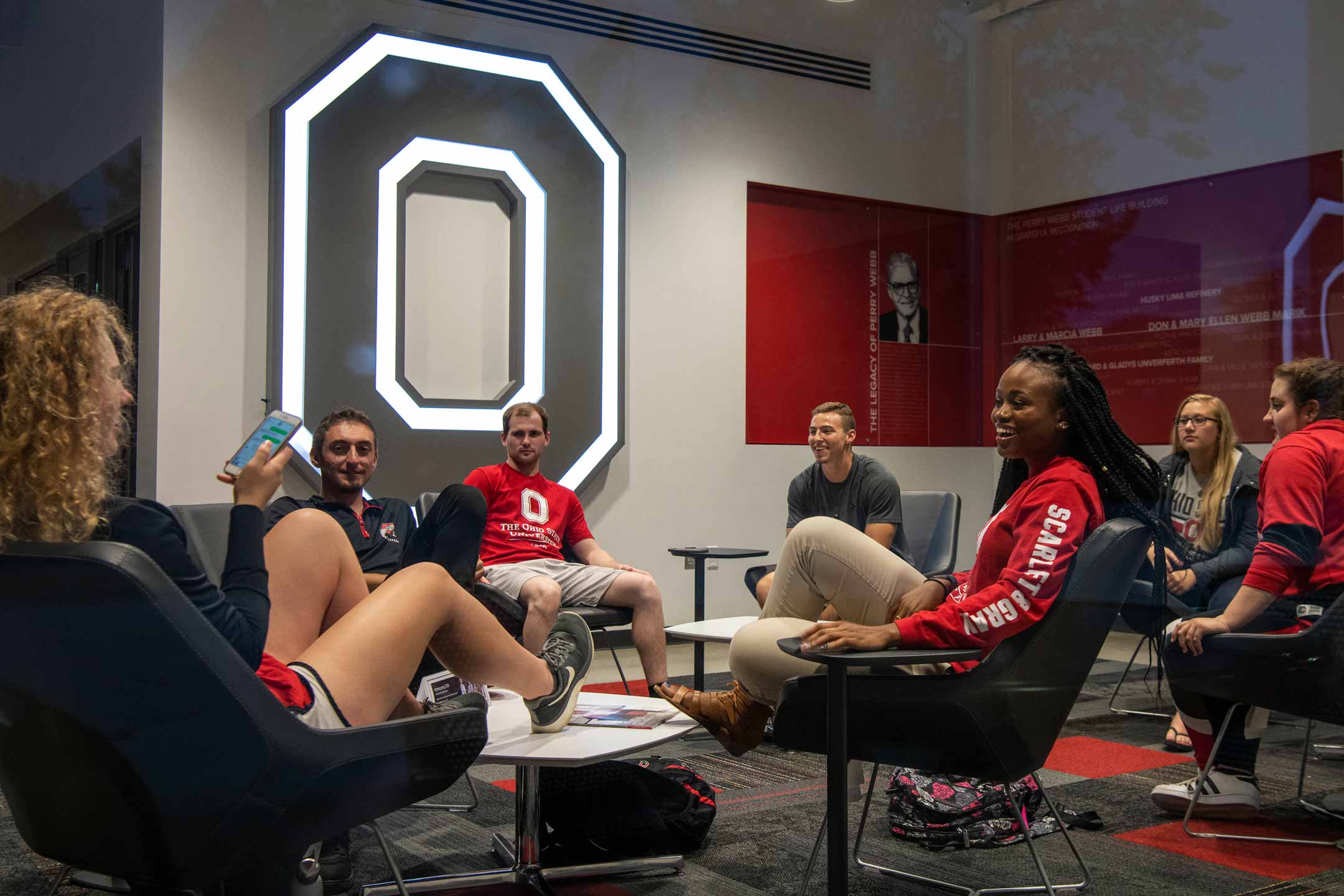 As a freshman, Jessica Zimmer knew virtually nothing about the pre-med process. She admits that was frightening for her and her parents.

However, she took full advantage of a University Survey course through the College of Arts and Sciences. The course allowed her to attend weekly classes in which two biology majors explained the path of a pre-med student.

“There’s so much to navigate, and it’s really difficult for first-generation students and even students who don’t have physicians as parents to understand all of it,” Zimmer said. “The advisors explained how to pick a major, the interview process, the standardized tests, the importance of shadowing and volunteering.

Along with those specific insights, Zimmer said these courses offer students help for everything from managing stress to the importance of involvement to research options available.

“Ohio State has so many resources, and this program was instrumental in explaining not only the process but all those resources,” Zimmer said. 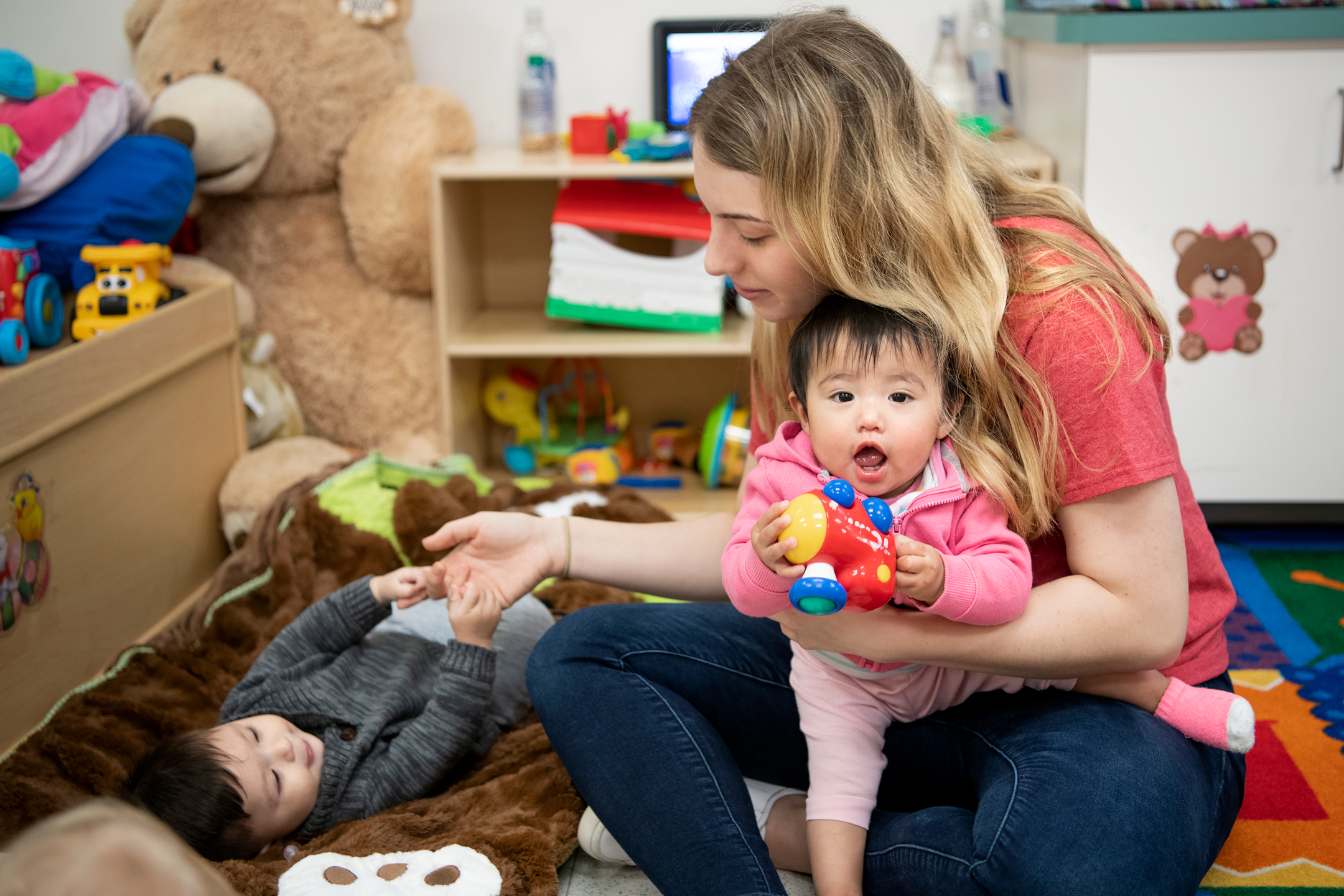 Early morning Florida sunshine flooded the classroom, but that’s not what lit up the baby’s face. The little girl was smiling and laughing with Jessica Zimmer as she held and played with her.

It was a typical scene during this particular week in December in which Zimmer was among a group of Buck-I-SERV students serving in the Pathways Early Education Center in the largely migrant community of Immokalee, Florida.

“It was a special experience,” said Zimmer, who aspires to a career in obstetrics in underserved Spanish-speaking populations. “You give but you gain a lot more.

“Buck-I-SERV is a great way to get exposure to how other people in our country live.”

Ohio State’s alternative break program, Buck-I-SERV began with a single trip to New York City in 2003 but has grown substantially. Each year, students in Buck-I-SERV visit nearly 20 states and five countries in 80 trips, which take place during breaks in March, May and December. 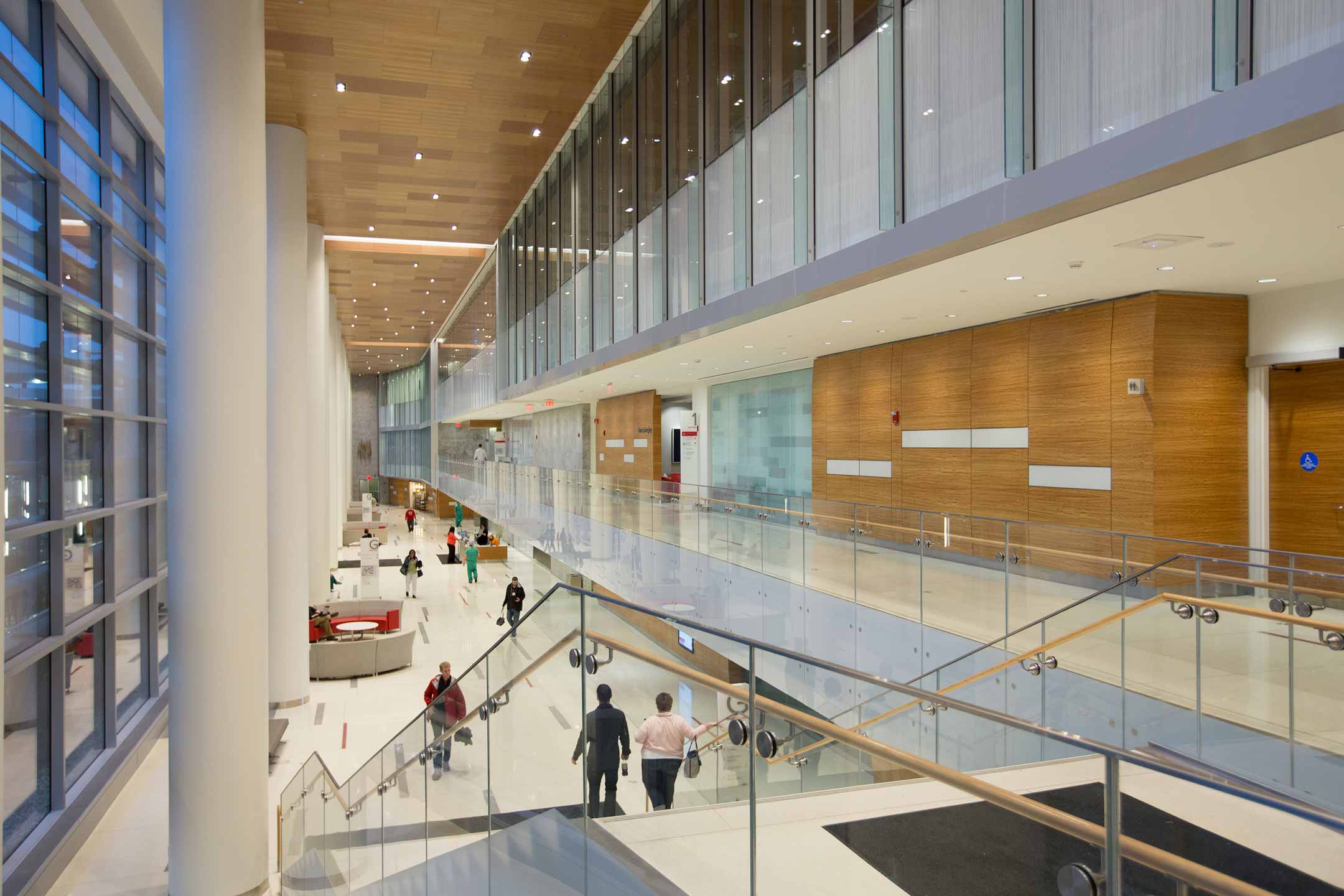 Columbus offers a world of opportunities

Moving from a small, rural community, Jessica Zimmer has fallen in love with Columbus.

“Being in Columbus is key,” Zimmer said. “It’s the perfect community because there are so many opportunities, especially for someone interested in medicine.”

Getting accepted to medical school requires a well-rounded portfolio. Zimmer gained a research internship prior to even stepping on campus her first year, at Endocrinology Research Associations, Inc., where she’s now a clinical research associate. This past spring, she was also able to land a job as a patient care assistant at The Ohio State University Comprehensive Cancer Center – Arthur G. James Cancer Hospital and Richard J. Solove Research Institute.

Already as an undergraduate, Zimmer has shadowed physicians at Ohio State’s College of Medicine and La Clinica Latina. Her volunteerism includes working as a lab coordinator at La Clinica Latina, working in multiple patient units at Nationwide Children’s Hospital and serving as a Big Sister in Big Brothers Big Sisters.

“Columbus also has a diverse population, which is something I love,” Zimmer said. “As I’m looking at med schools to apply to, I’m comparing them to Columbus. I want to be somewhere that offers the same opportunities.” 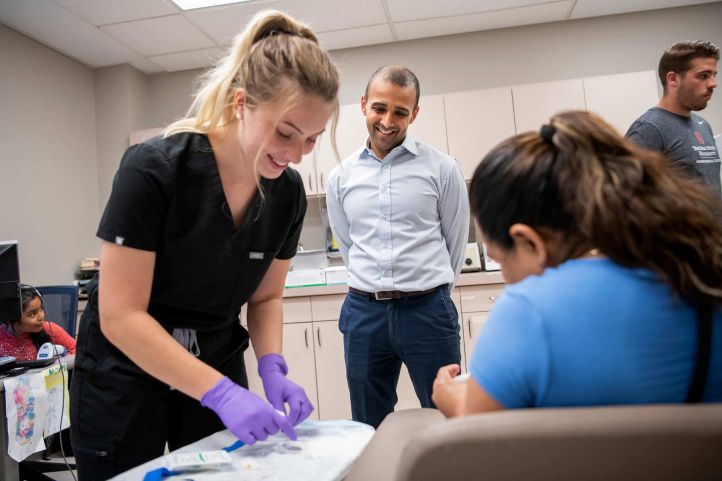 Inside the exam room at La Clinica Latina, Jessica Zimmer switched seamlessly between Spanish and English as translator between Dr. Summit Shah and his patient. A few moments later, Zimmer was drawing the patient’s blood for a blood sugar check.

All signs were good. The patient walked out smiling with her two daughters. It was her first visit to a doctor’s office in a long time. Between language and health care access barriers, it’s a common refrain Zimmer and Shah hear on Tuesday nights at La Clinica Latina.

“We see many patients who have gone months or years without necessary essential medication,” said Dr. Shah ’05, ’10 MPH, ’10 MD, La Clinica Latina’s physician advisor since 2015 and an assistant professor in Ohio State’s College of Medicine.

The free student-run clinic, part of the Columbus Free Clinic system, is run in conjunction with Ohio State and the Ohio Latino Health Network.

It’s a place Zimmer found mentors and a path.

Shortly after she started at the clinic in the fall of 2017, Zimmer — who draws blood, takes vital signs and performs lab testing — helped a patient get control of his diabetes.

“He had been afraid to go to the doctor because he didn’t think they’d understand him,” said Zimmer, who aspires to be an Ob/Gyn in underserved communities. “Each time he came to see us, he looked better, his numbers were better, he felt better. Our clinic being here one night a week changed his life.

“It showed me what medicine could do. And I want to provide that safe haven.”

Zimmer said Shah is the “embodiment” of what she wants to be, treating the underserved. Shah said Zimmer embodies what makes volunteers at the clinic successful.

“She’s a highly energetic and motivated individual who demonstrates genuine compassion and empathy for those who need help,” he said. “For students like Jessica, this is an invaluable experience both from a clinical exposure standpoint but also from a working with the underserved population standpoint. It helps individuals build compassion and empathy. That is a critical component of a career in medicine.”

Shah often works directly with students like Zimmer and allows them to shadow. Other mentorships also happen because of the collaborative spirit at the clinic along with the diversity of educational levels and disciplines.

Shah was happy to hear that.

“Sometimes the hierarchy in medicine can be intimidating because it’s such a long journey,” he said. “But I hope by creating a relatively down to earth atmosphere, anyone at any level feels welcome to provide ideas and engage with the singular goal of providing better care to the underserved population.

“I’m happy Jessica is one of those individuals who has taken advantage of that. And it’s left a good mark."

Whether you're helping to provide medical care for underserved populations or assisting young people in reaching their potential, you'll find the support to make it happen at Ohio State. Dennis Kibalama is another student who found his place at Ohio State.