When Ohio State received the Senator Paul Simon Award for Comprehensive Internationalization earlier this year, it was the culmination of the university’s efforts to develop programs, course work and outreach opportunities in Columbus, Ohio, and abroad.

While "comprehensive internationalization" can seem like an abstract concept, it's plain to see at Ohio State. Here are just five areas where one can see the university's commitment to increasing and strengthening interactions across the globe.

Columbus, Ohio, is an education destination for thousands.

More than 6,000 international students come to Ohio State to study each year. When they arrive, they find the same welcoming, supportive Midwestern spirit that all Buckeyes encounter.

Example: To assist the international student population in China, the university holds pre-departure orientation for students and their parents. An airport welcome program and academic and service enhancement programs support cross-cultural adaptation once they arrive in Columbus.

More Buckeyes are studying abroad than ever before. 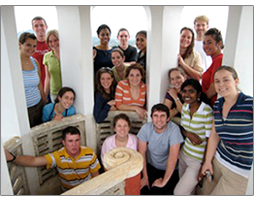 It’s such an important learning opportunity that the university has joined Generation Study Abroad, a five-year initiative launched by the Institute of International Education to double the number of U.S. college students studying abroad by the end of the decade.

Ohio State has found success already: Its new Global May programs for first- and second-year students contributed to a 41 percent increase in study abroad program enrollment in 2013.

During the 2012-13 academic year alone, the Office of International Affairs distributed more than $2.3 million in grants and scholarships to students and faculty. The awards were given for research projects, study abroad scholarships, K-12 education and faculty professional development as well as area studies.

Meanwhile, the university is involved in a number of projects spanning the globe that address pressing concerns facing our world – from leading a $24 million USAID project to improve agricultural productivity and food security in Tanzania to being the only university selected to implement and administer the U.S. Department of State’s Critical Language Scholarship Program in East Asia.

Our faculty and staff are fully engaged in the exchange of ideas through teaching and research abroad.

Ohio State is home to a record 14 Fulbright scholars – earning the university a No. 1 ranking among public research institutions.

Internationalization is infused into the curriculum. 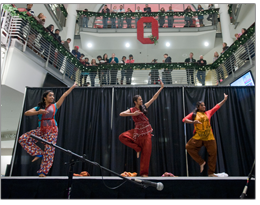 Students of a dance coalition perform at Taste of OSU

In addition to the 30-plus foreign languages taught on campus, the Global Option is another way for undergraduates to integrate internationalization into their majors while still graduating on time.

So far, the colleges of Social Work, Public Health and Engineering have adopted the Global Option; plans are being formed at the colleges of Arts and Sciences; Education and Human Ecology; Food, Agriculture and Environmental Sciences and the Fisher College of Business.

In 2010, the university began establishing a physical presence in key parts of the world through its Global Gateways. The offices in China and India enable the university to forge new partnerships, recruit international students, support faculty research and provide new ways to partner with Ohio-based businesses.

Through the Academic Partnership Program, scholars from Ohio State and around the world are collaborating on issues facing our world. The gateways also facilitate Executive Training and International Corporate Partnership programs, which create student internships and full-time employment opportunities with global companies, such as IBM, Fiat-Chrysler and Bosch.

Ohio State’s third gateway office will open in Brazil in September, and the university is examining opportunities to establish others in Turkey, sub-Saharan Africa and Europe next.

Buckeyes have many opportunities to broaden their world views. Here are a few options: