A Thanksgiving home away from home

Ohio State's Thanksgiving dinner has provided fellowship for the campus community since 1992. 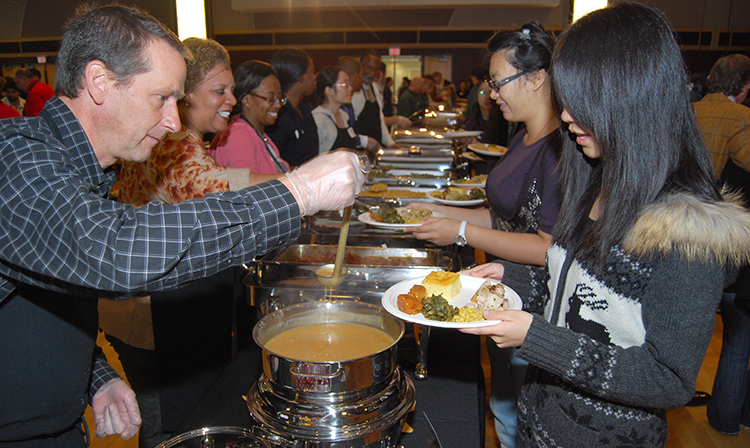 Ohio State has hosted a Thanksgiving dinner for students, faculty, staff and their families on campus for 25 years. The event is hosted by the university's offices of international affairs and diversity and inclusion.

When Lori Waite didn’t have a place to go on Thanksgiving day, she started worrying that others might be in the same situation. Waite, then an Ohio State graduate student, wanted to find a solution for those who couldn’t make it home for the holiday.

So in 1992, she and a fellow graduate student, Bill Batson, teamed up with the Hale Black Cultural Center to hold a Thanksgiving potluck dinner.

“We wanted to make sure that those students had a traditional Thanksgiving meal, others to fellowship with and did not feel alone,” said Waite, who’s now a professor of sociology at Tennessee Wesleyan University.

Larry Williamson, who was then assistant director of the Hale Center, worked with the students to organize the first dinner. He said about 25 people showed up, and when they decided to hold it again a year later, it grew to 50.

“When we saw it doubled, we understood and we knew that this could be something special and something unique,” said Williamson, who’s now the director of the Hale Center.

Williamson said that over the years, the dinner continued to grow and expand, transforming from a potluck dinner to a more organized event. The Office of Diversity and Inclusion teamed up with the Office of International Affairs to lead the planning. Organizers recruited volunteers, got Ohio State leaders involved and eventually had to change venues because of the growing crowd.

Today organizers say the dinner has become one of the largest — if not the largest — free Thanksgiving meals hosted by a college or university. The event, celebrating its 25th anniversary, is now held at the Ohio Union and feeds close to 2,000 people in two shifts. That includes a total of 650 pounds of turkey, 1,026 pounds of sweet potatoes and 2,000 slices of pie. The dinner even has its own mascot, Mr. Turkey.

“When you talk about tradition now, we can honestly sit back and smile and say the Thanksgiving dinner is a tradition now at The Ohio State University,” Williamson said.

Jessica Holcomb, a fourth year studying human resources, is one of this year’s student co-chairs. “I would describe it as a really big family coming together for dinner,” she said. “It’s very warming and welcoming. You can just tell that everyone is thankful to be there.”

Holcomb and the other co-chair, fourth year student Jing Li, plan the menu, craft the budget and organize the hundreds of volunteers..

An opportunity for volunteerism

Milly Valverde, associate director of the Interpreter Services and Medical Destination program at the Wexner Medical Center, has volunteered at the dinner for the last eight years, always bringing her husband and three boys to help. She said one of her favorite parts is interacting with many of the international students who can’t make it home for the holiday.

Darry Andrews, director of the Mathematics and Statistics Learning Center, started volunteering at the dinner in 2004. He, his wife and two children, have been going every year since.

“When you reach out to others that are far away from home, it has a profound impact on opening up avenues of communication,” he said. “We may have been viewed as strangers initially, but it breaks the ice and lets them know that even though their families are far away, we serve as their family on that particular day.”

Office of Diversity and Inclusion